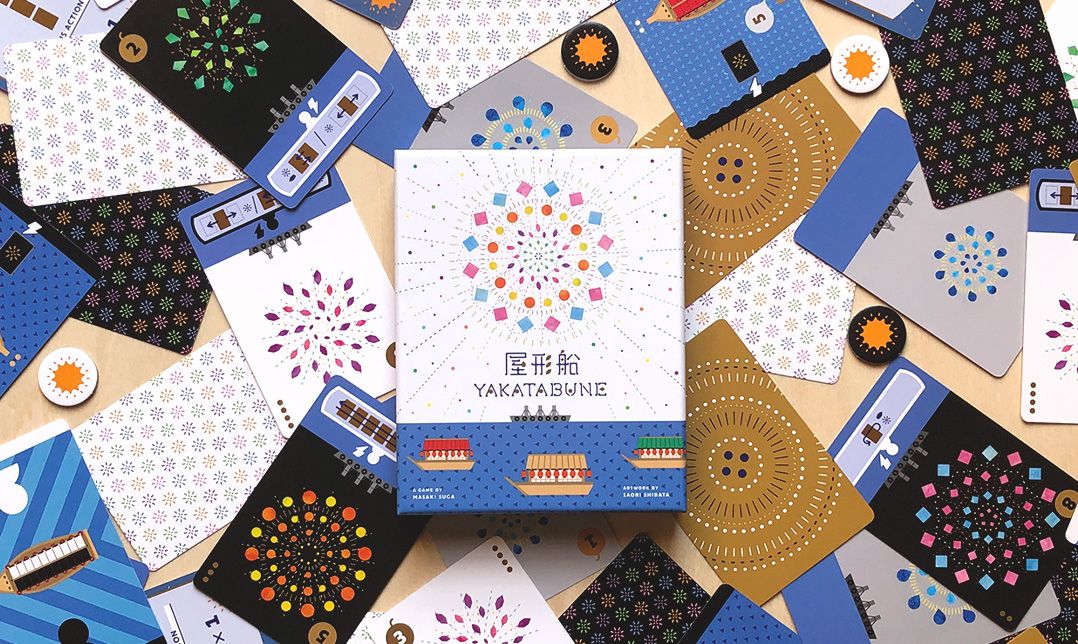 Tom: I need to kick-back, relax, play on some slide guitar, drink a bit too much too cheap whiskey and sing a song about my problems.

Tom: We’ve done the heavy lifting here, they can put the pieces together this time. Let’s crack on-

Ava: -WITH THE GAMES BLUES!! 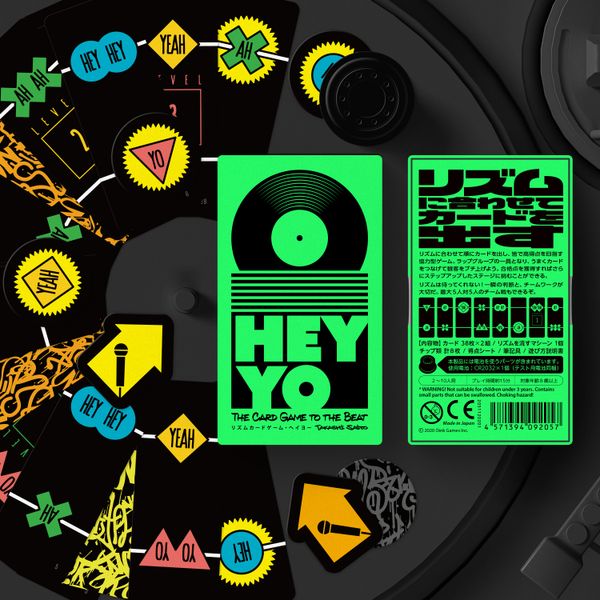 Ava: OhMyGOSH there’s just so much over on the boardgamegeek blog pouring out of the Tokyo Game Market. A lot of this is stuff that may not see a European or American release, but there’s so many lovely things that I have to link you to three, separate, round-ups of all the best Japanese games.

The one I’m most curious about is Hey Yo!, a version of Five Lines, which has players slamming down cards in rhythm, creating something like a musical stave, glistening with notation in different colours and symbols. Once all the cards are laid out, only then do you get to start running pieces along the lines, interacting with the notation to score points and build combos. High scores rely on high collaboration, and spotting when someone’s made a mistake and whether or not you can fix it. This one is from Oink, so will hopefully see a wider distribution, and features two decks, so that instead of just playing co-operatively, you can double the player count and play two rival games. This is so nice! It includes a little music device to play with, but you can also just put on your own tunes and play with those beats instead. I’ve only just realised how much I want to see more rhythm games on the tabletop, because my word, is that a great way to add the time pressure to decision-making that makes mistakes inevitable and hilarious. 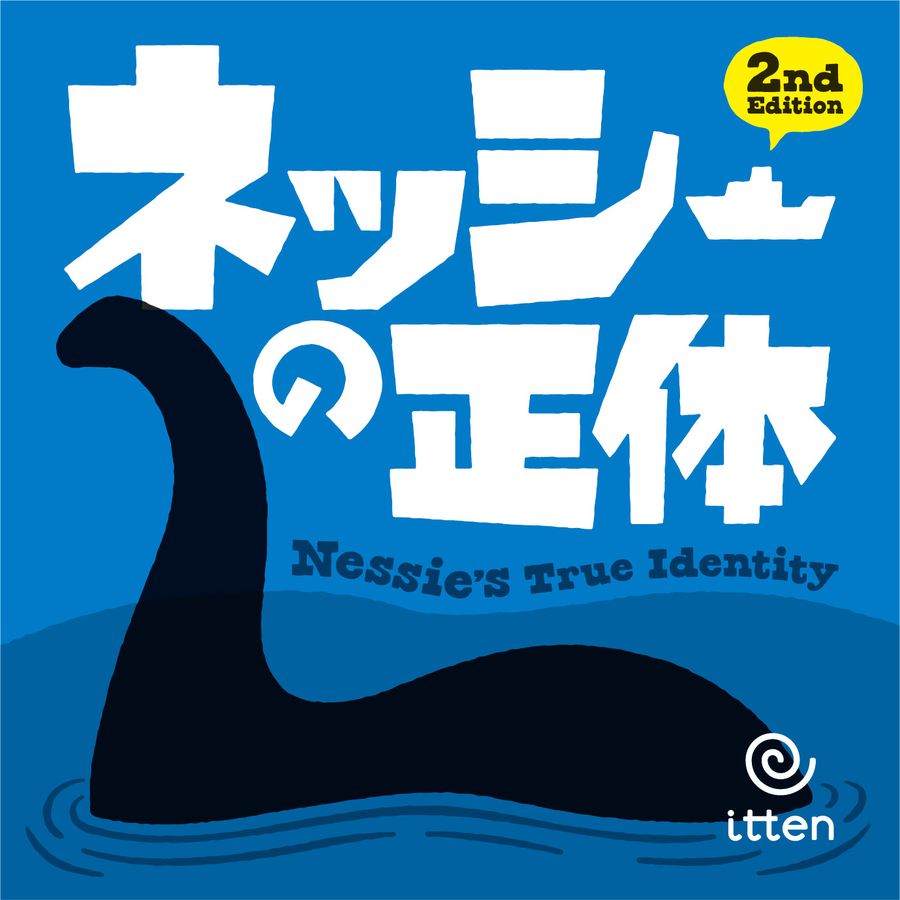 Tom: If that doesn’t float your boat then don’t worry, there are a couple more exciting bits and bobs to peruse. Nessie’s True Identity has your mates excitedly yelling nouns that could be the name of an ancient sea-beast, and comes with my new favourite game component ever – a series of plastic letters spelling out ‘WHAT?’. 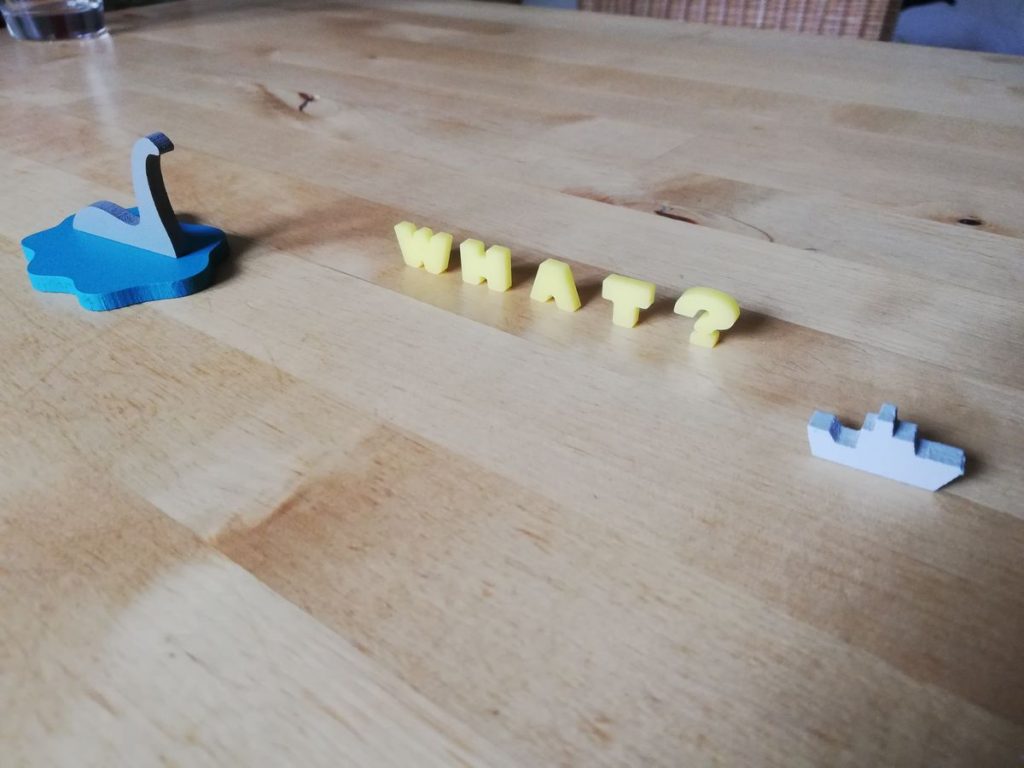 Meanwhile, Yakatabune is a little card-driven-two-player box where you play as rival pyrotechnicians trying to impress nearby houseboats with many a colourful display. In a nutshell; it’s kind of like Schotten Totten but with explosives! In a tortoiseshell; it’s like Schotten Totten but playing the cards will give your opponent ways of manipulating the cards once they’ve been placed down, and secret ‘program cards’ will let you combo bonus actions together and GOSH it all sounds rather dizzying but EXCITING. 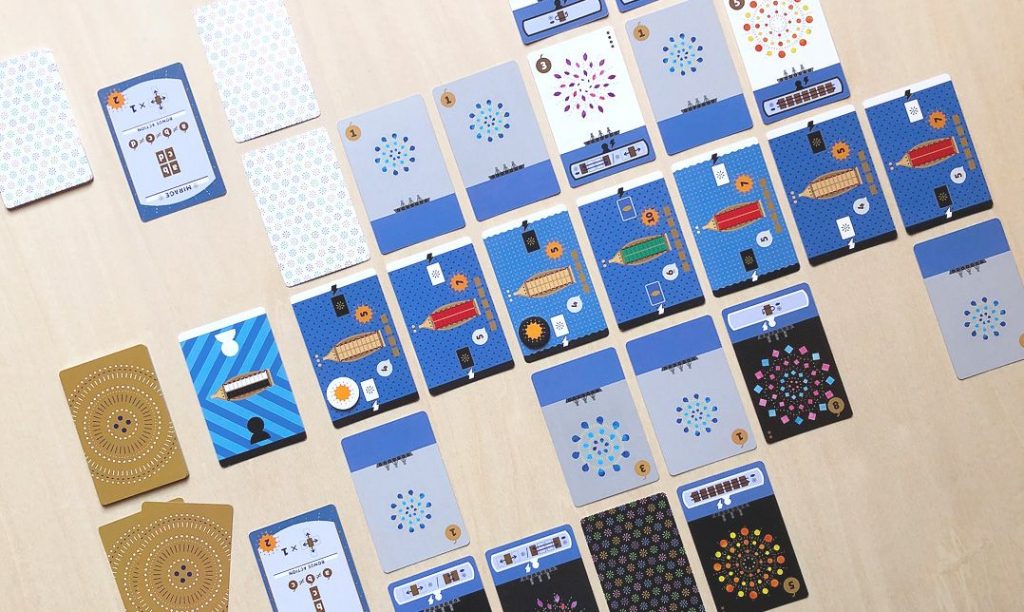 Ava: This isn’t really news but I’m so very excited!

There’s a new Tiefsee edition of The Crew on the way. We all know that Tiefsee is german for Teeth See, so this edition is presumably about the Pope of Teeth, so I’m really not sure why there’s a deep sea theme on the cover. I guess that’s where the holy-father of dentistry lives. I still think The Crew is the best trick taking game I’ve ever seen, and I’ve developed an increasing passion for taking tricks over the last few years, so I’m as hyped up as a deep sea diver who’s just found Kate Winslet’s necklace. Tom: It really is very good – and I only managed to get up to mission 15 of the 50-strong booklet that guides you through the game’s perfectly pitched difficulty curve. This new box is completely standalone, so I’m keen to see if they double down on the missions that are a little unusual, or try to perfect perfection in just being a ferociously slick trick taker.

Ava: Burncycle sounds like a rhythmic pain, but sadly isn’t a rhythm game. Actually, is it? I can’t make head or tail of this kickstarter. THOMAS! Get out your kickstarter calipers and get the measure of this. 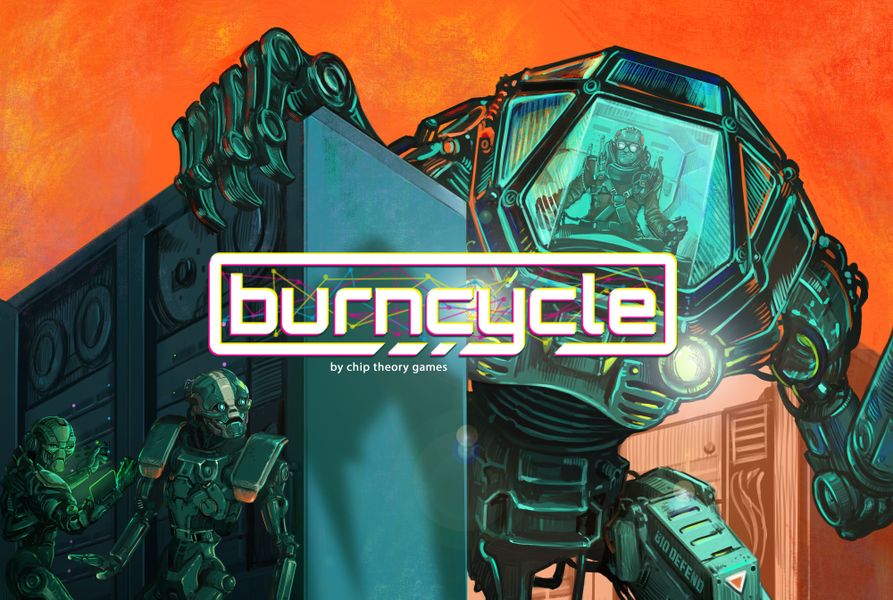 Tom: BURNCYCLE from Chip Theory has you and a smattering of robot pals doing missions in facilities to complete, you guessed it, objectives! The main board is a sort of a dungeon-crawly map littered with chip theory’s signature… poker tokens? Risk disks? Most of the action seems to take place on your personal player boards, covered in your robot’s spicy abilities, and a ‘network map’ that shows what flavour of ‘science fiction’ corporation you’re facing off against this time. There’s a neat mechanic here where you move pieces around this network map each turn, giving bonuses to possible abilities taken on the main board – a little planning-and-efficiency minigame that makes your dungeon crawl more of a dungeon jog. 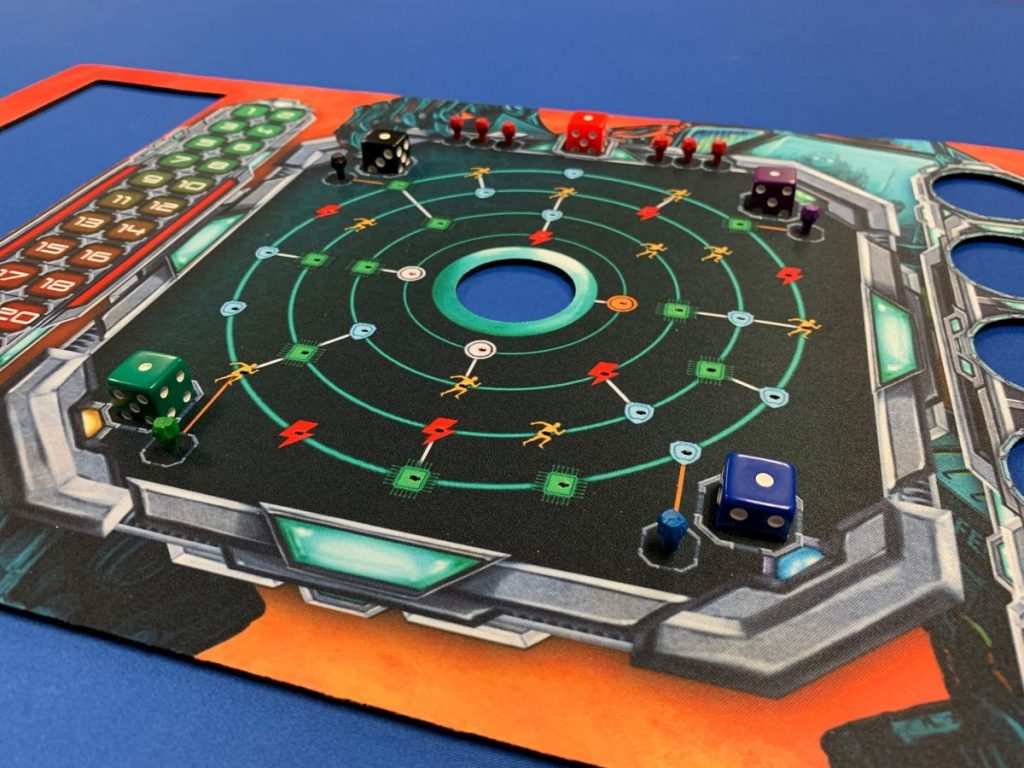 I’m explaining this in possibly the driest way possible – but in truth it’s the missions, options and emergent decision making that might make this one sing. I do hear lots of people making GoodNoise about Too Many Bones – but maybe that escapes being described in a dry fashion because you can technically play it in the bath. It sounds fun! It’s got a good name! This one doesn’t have as good a name so maybe it’s not as good? Thank you. 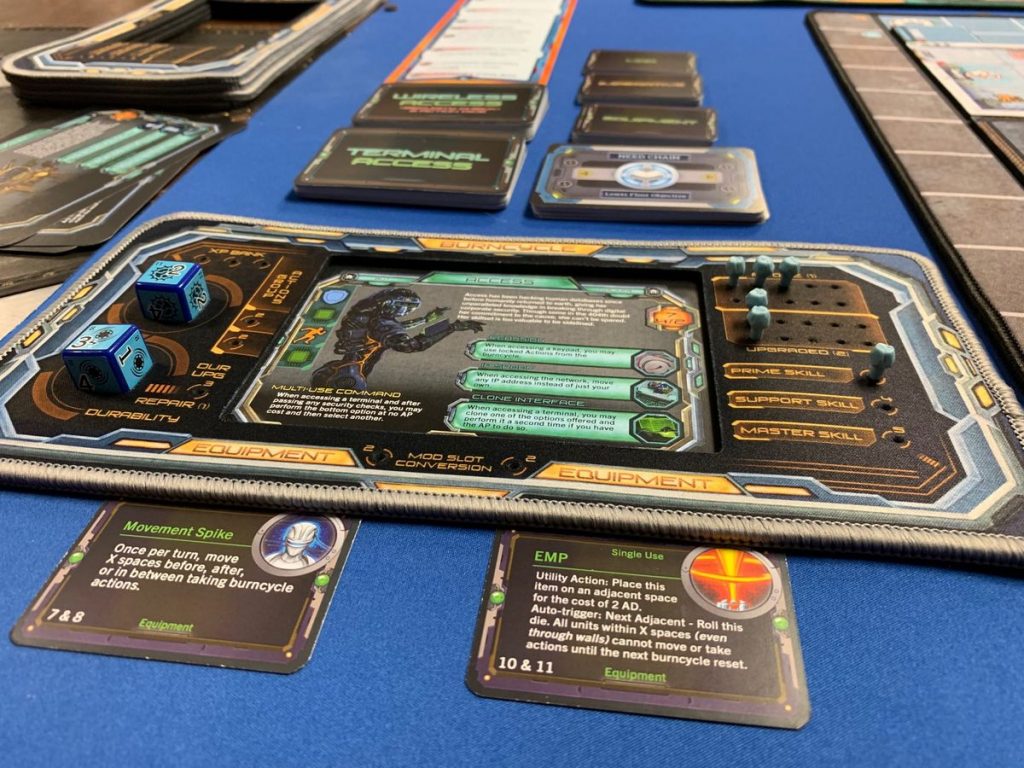 Ava: I’m a sucker for a clever design hack. Top tip for people thinking about running a kickstarter is to do some really clever, silly thing as part of your campaign.

Slugblaster is a role-playing game by Mikey Hamm, on kickstarter with the support of Rowan, Rook and Decard, who brought us Spire, Heart and all those ridiculous one page RPGs. It’s a punky retro sci-fi game about hoverboarding kids that kill monsters with home-made weapons. The tagline is ‘kickflip over a quantum centipede’, which will likely tell you everything you need to know. It’s built on Blades in the Dark and has certainly figured out how to nail a very particular aesthetic. Ava: What warranted its inclusion in the news, I hear you cry?

Tom: What warranted its inclusion in the news?

Ava: Be quiet, Tom. The deal-clincher for me was that the deluxe edition comes in a pizza box. This will have notes and tables and rules printed on the interior, so you can use it as a DM screen while playing. That’s just brilliant, silly, deeply on brand and I love it. 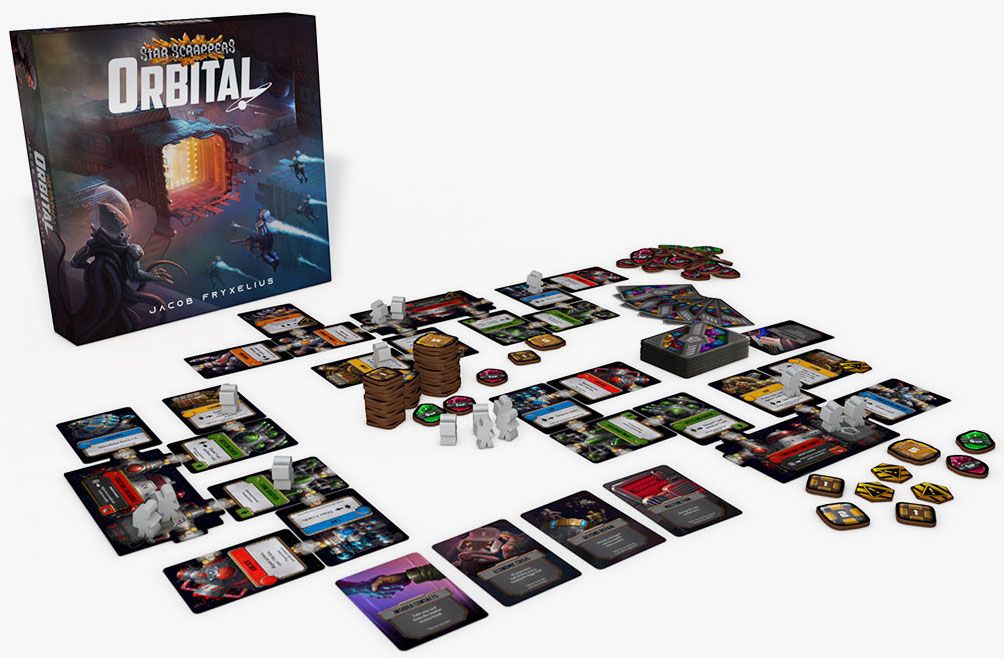 Ava: Elsewhere on kickstarter Jacob Fryxelius’ next game is crowdfunding now, and I’m curious what ‘Mr Terraforming Mars’ is up to next.

Star Scrappers: Orbital looks a little bit softer on the sci-fi spectrum. It combines engine building and worker placement, and the elaborate card-based systems appear to be all present and correct. I also completely missed the core selling point on my first pass, which is that you’re building a space station with a load of interlinked cards with different abilities. It looks a little like Galaxy Trucker, but with a thick slathering of powerful card combos. I have a lot of faith in Jacob’s ability to build a densely intertwined deck of cards, so this could definitely be one to watch.

Tom: Yespleasethankyou. Anything that has even the faintest whiff of ‘computervideogame’ Offworld Trading Company about it makes me quite pleased – It is, after all, a known fact that when business meets space you get: good. Stocks in zero gravity! Quarterly meetings in orbit! The possibilities are endless. I’m glad the trailer placed some emphasis on the fact that sabotage will play some part in this box – as there’s nothing sweeter than the feeling of disrupting a player’s perfectly-oiled engine with a sprinkling of health and safety violations. Ava: Ooooh. It’s an Art Attack. Which I realise is a reference only Brits of a certain age will remotely understand.

Katia Howatson has an artists diary up on boardgamegeek in which she talks about her art, her instagram, her recent calendar kickstarter, and just shares a load of lovely mosaics made with board game pieces. It’s exactly the sort of clever idea you wish you’d come up with, executed so immaculately that you don’t get jealous. What a lovely thing. 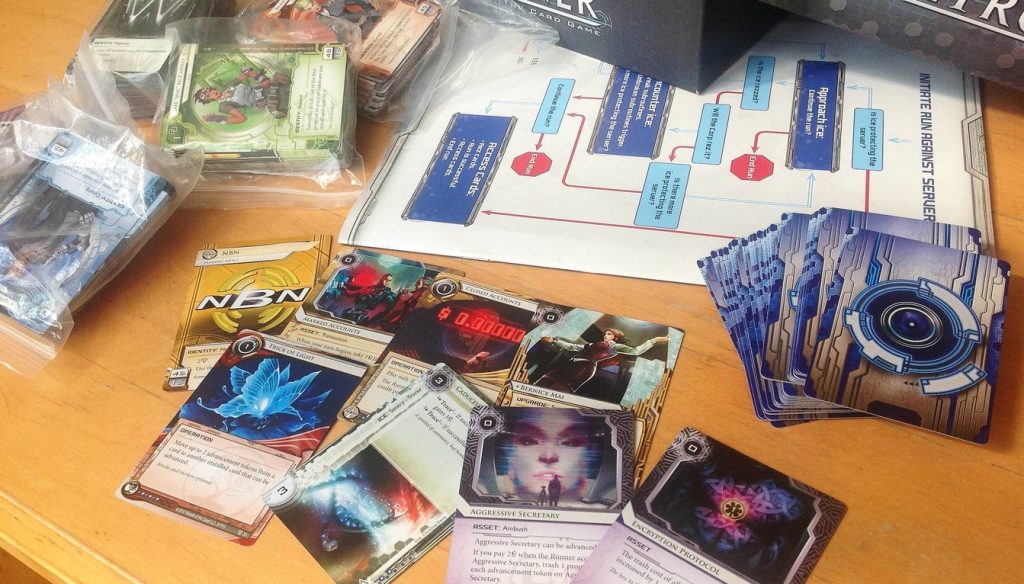