[The following impressions are entirely spoiler-free.]

Leigh: Quinns? Why is the front door locked

Quinns: Leigh! So glad you could make it. I know being on Shut Up & Sit Down is a bit intimidating, but I’m sure you’ll do fine.

Leigh: Honey I have to be on the TV news in an hour-

Quinns: Not a problem! Just tell them you had to share your impressions on Seafall, the new Legacy game from Rob Daviau, designer of Risk Legacy and co-designer of Pandemic Legacy.

Besides, TV’s a dying medium! I bet they don’t have an email and a Facebook. Did I show you our email?

So, you and I and some friends of ours started our Seafall campaign last night, pushing it to the MAX with a full five players. By now most of the board gaming world knows a few things about Seafall – it’s Daviau’s first game that’s designed from the ground up for the box-opening, card-ripping Legacy format, it’s more complex than past Legacy titles and it looks insanely exciting. Boats! Intrigue! Exploring misty islands and sticking them on the map!

But by the end of our first evening we all agreed that a post on SU&SD explaining what Seafall isn’t would probably be very helpful. 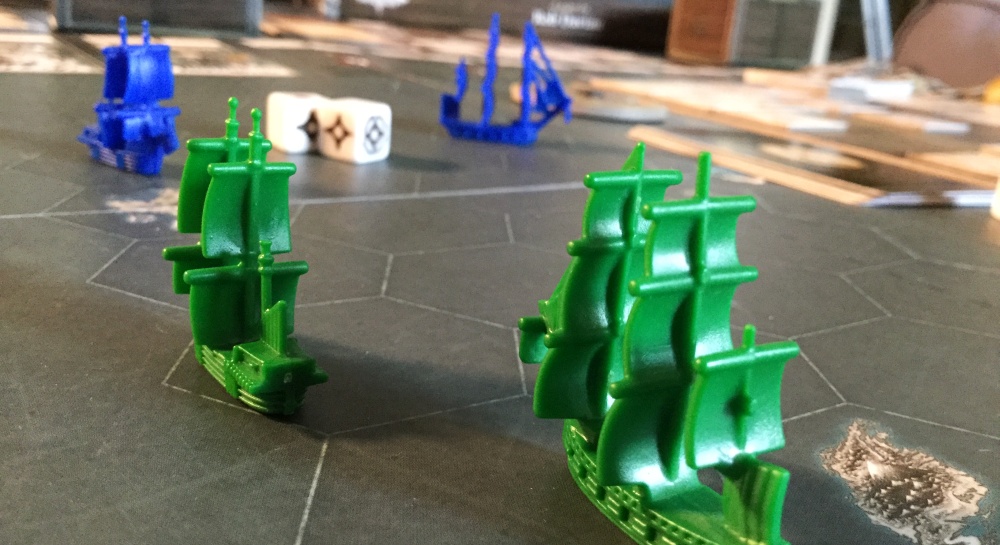 Leigh: Ooh a Legacy game! I participate in fewer and fewer board game nights these days because I have the attention span of a flea, but one of my favorite experiences recently was playing Pandemic Legacy with Quinns.

It was like we were telling a story together, experiencing a pretend-year one night at a time. Although I don’t think I would have been too interested in playing game after game of Pandemic on its own, it is basically engaging without being overwhelming, and we could collaborate — so I got to focus on all the best aspects of the Legacy experience. Naming things! Opening up surprises! The illicit thrill of ripping up board game parts, which, in our house, would be unspeakable otherwise.

I think a lot of people had the same experience with previous Legacy games, where the Legacy aspects offered an additional level of accessibility and excitement to a spouse or a friend who is design-literate but doesn’t play as much as the others.

Quinns: Right. I think the most important thing to express about Seafall today, when people around the world are planning who they’ll play this game with (dipping their invites in coffee for that olde world feel, maybe?), is that this is categorically not a game for everyone.

Seafall is a box for people who play and enjoy the gentle giants of the board game world- thoughtful, heavy games where a table of players can fall silent for tens of seconds at a time. You’re expected to weigh up different systems and options, cross-referencing several different boards before settling on an efficient plan. More specifically, you’re considering the benefits of going to one island instead of another and of buying goods instead of raiding. You’re deciding on which upgrades or buildings you’re working towards long before you can afford them, and then checking that other players won’t buy them first. You’re also considering the impact of these strategies on future games of Seafall. 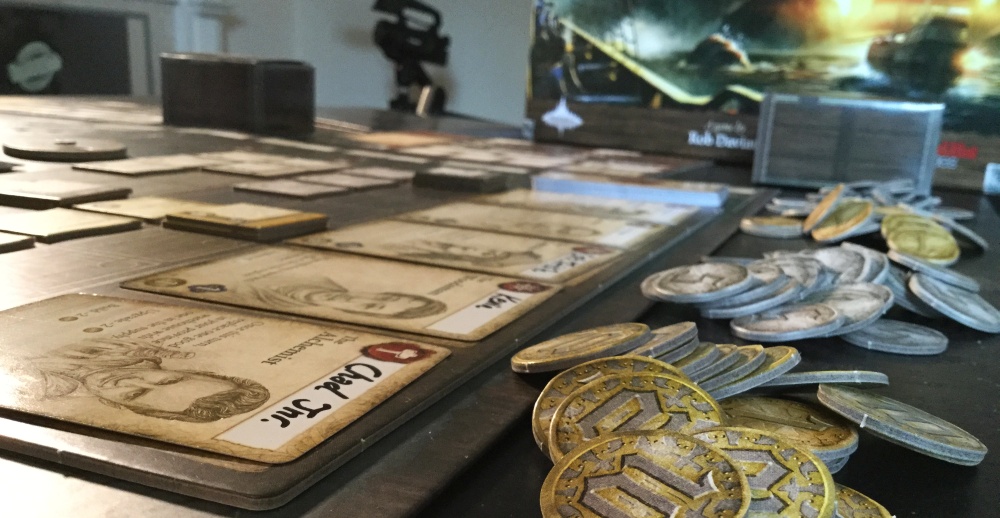 Contributing to Seafall’s slow pace is the fact that one of the ways Daviau uses the Legacy format is that when you start playing, the game doesn’t totally exist. You unveil the board, the strategies and the very game itself by playing Seafall. That probably sounds deeply sexy and interesting until I tell you that this unveiling of the board takes actual hours, and the “Prologue” – an extended tutorial where players uncover their initial island chain – had us looking at our watches, waiting for it to be over. That’s a far cry from finishing a game of Pandemic Legacy and checking your watch to see if you can squeeze in another game.

This also means that our review’s going to be a long time coming. The back of Seafall’s manual hints that the box contains 20 games, but I suspect we won’t have a handle on where the Legacy mechanics are going or what the heck we’re doing until after at least five or six evenings of Seafall.

Leigh: I think it’s worth noting that we played the prologue with five of us, the maximum number, and each person’s turn has several phases. For someone like me there were already a lot of moving parts to synergize, but I found it extra-difficult to strategize when there would always be four moves with several phases ahead of me. One of our friends grokked it right away and began raking it in, but I found it tough to get my head fully around planning — I should note that despite this I actually led the track most of the game and finished the prologue in second place, so it’s not that I didn’t understand the game, merely that it requires the kind of patient thought process that people who love to play competitive resource management games tend to have. 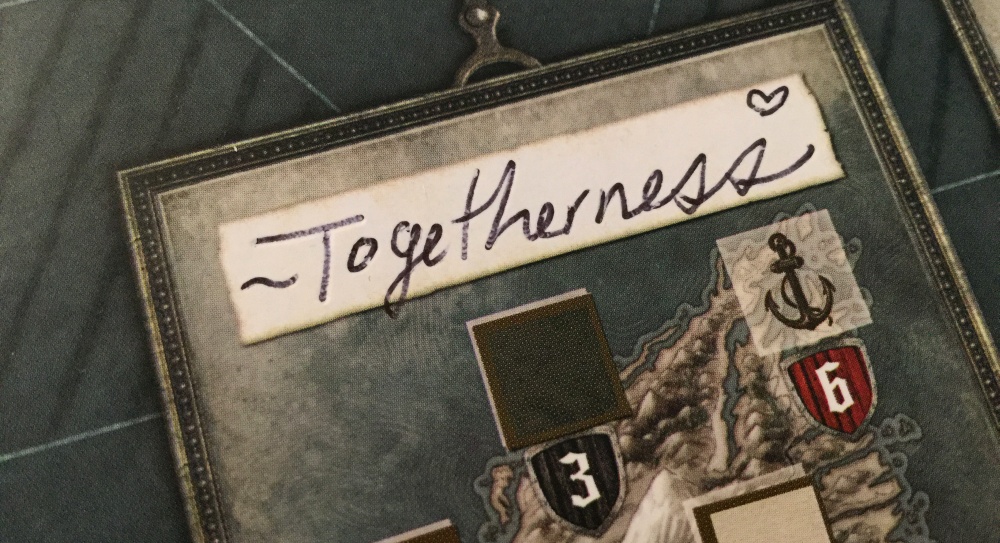 I came away feeling like maybe that for all but the most austere managers of maps, five players might be too many. I was intrigued to see how the game would open up, but my fatigue of waiting had got the better of me. Again, I’m hardly known for my attention span, but I know there are a lot of players like me who might get excited by Legacy play but who aren’t prepared for deep strategy, and this game might not be for us.

Quinns: So, one evening in and it’s safe to say that you’ve already decided to drop out.

Leigh: Yeah. It just might not be my taste of thing. I feel conflicted because the game is clearly beautiful and I want to know where it’s going — I was really excited by the Legacy elements we did get to see — but I don’t have the chops to hang in there. I was never great with moving resource cubes around.

Quinns: Sure.  But weirdly, the rest of us are fine with you dropping out because dropping down to a more svelte 4 player campaign so we can cut through these seas faster sounds really appealing. Which is putting it lightly. I think if all five of us were still playing next week I’d be willing someone to drop out, which is a horrible thing to say.

It’s not just that less players means less waiting between turns. It also means that there are less alterations to the board state between your turns, so your plans can hang together better and everyone’s turns actually become faster. The tradeoff for having less players is that you then have less raiding and violence on your board as people compete for resources, but that seems like a small price to pay. In fact, I’ve an inkling that it might even be a bonus. Any designer who expects their players to plan very carefully, then gives other players the chance to trash those plans, is playing with fire. And by “fire” I mean “people having a massive sulk”. 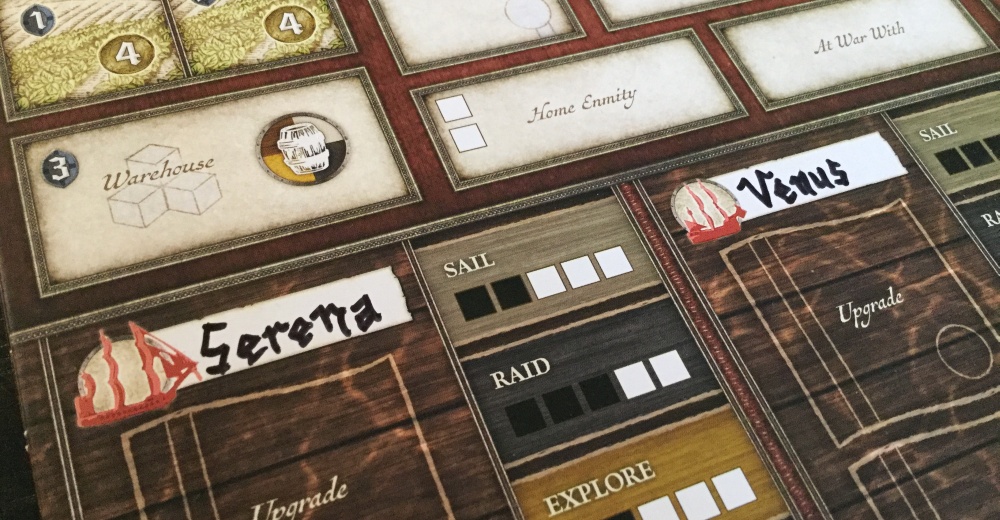 Leigh: I’m still really curious about the design. I expect I’ll probably still hang around watching the campaign, popping in to ask what is going on, and begging to write on, tear and open things. I still wonder if I’d have gotten hooked if we played the prologue with three. It would have felt like a more intimate competition, and I would have felt closer to it.

So in summary, consider playing Seafall with less than 5 people, be prepared for it to start slowly, and definitely don’t use previous Legacy games as a benchmark of whether or not someone will enjoy it. Similarly-themed heavy games like Archipelago or Merchants & Marauders aren’t a perfect barometer either, since they’re sillier, more social and more immediately rewarding.

Seafall is absolutely its own beast. That’s one of the most exciting things about it, in fact. But right now I’m thinking about its slow start, and the length of the campaign, and its unusual hybrid design of storytelling with engine-building, and of careful planning with random chance, and so far my only conclusion is that this will definitely be our most difficult review in 2016.

But that’s fine. We like challenges here at SU&SD. Bring on week two of the campaign! 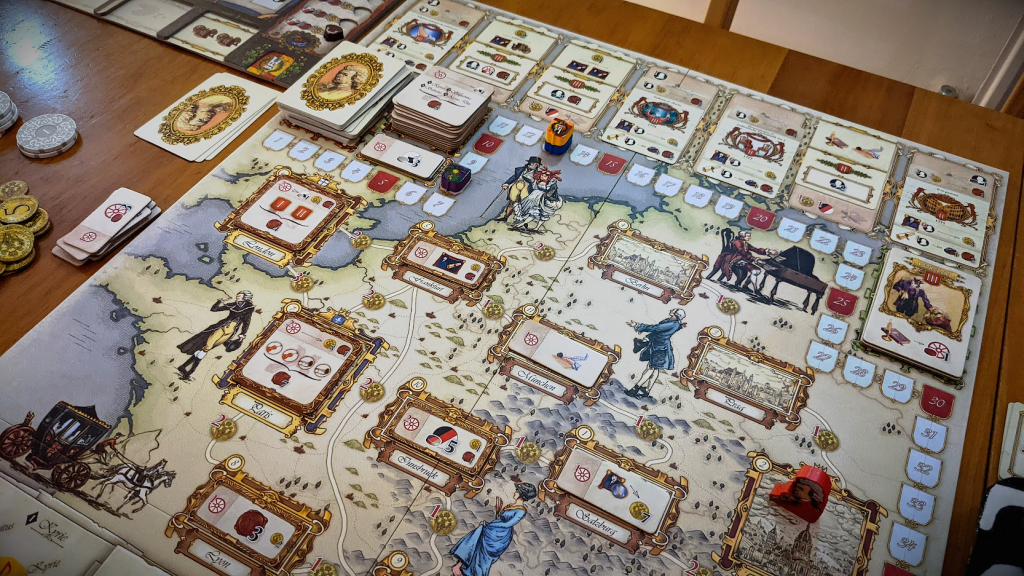