Ava: Wait a second, you’re not Quinns! You’re three interns standing on each other’s shoulders in a long jacket!

Ben: We tried that, and we still weren’t tall enough to pass as the real Quinns. As a fresh new intern I’m contractually obliged to replace Quinns where required, whether that is providing irreverent board game news commentary or tasting any food he eats to check for poison.

Ava: Well then, unQuinns, let’s get you a past sell-by-date sandwich, a mop and a big bucket of news. There’s work to be done!

Stonemaier Games is the games industry’s sultan of hype, so it’s hard not to get excited when they announce their plans. The last few days have seen a slow drip-feed of news about Tapestry, a new civilisation game from Jamey Stegmaier himself, who you might know as the designer of Scythe, Viticulture, Charterstone and more. 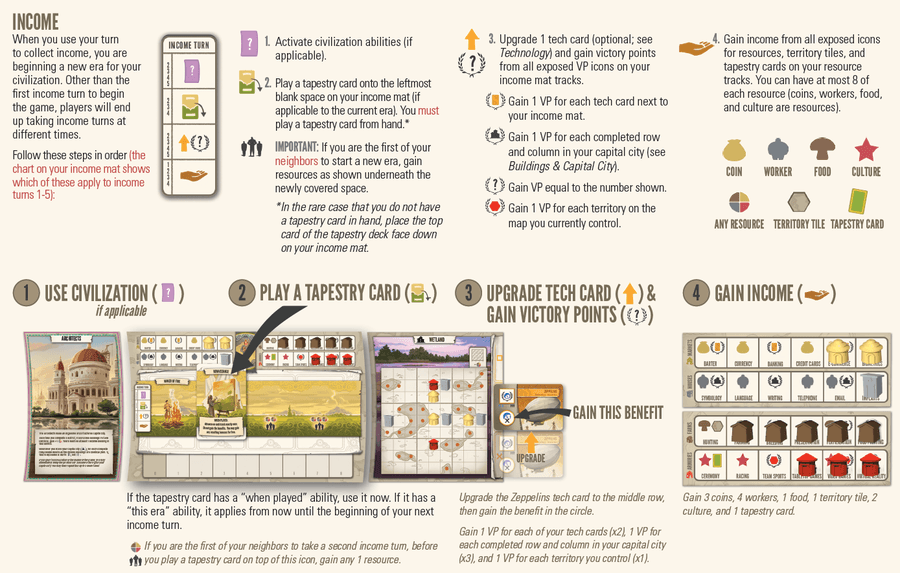 Ava: Stonemaier makes everything look like an opulent labour of love, and Tapestry is no exception. Tapestry grabs elements from pestilential misery simulator Antiquity and polyomino viking simulator A Feast For Odin, and then replaces those elements with lovely prepainted miniature buildings.

Not all the details are out yet, but so far we know you’ll be racing up civilisation tracks, placing buildings in home cities and taking income at carefully calculated moments. It looks like a lush production, and I’m intrigued by some of the ideas on show. Andrew Bosley’s art really shines, and I like that rather than using historical civilisations, you will take traits that might leave you playing as ‘craftsmen’ or ‘merry makers’. Building your own story sounds a lot more fun than inaccurately retreading historical tragedies. 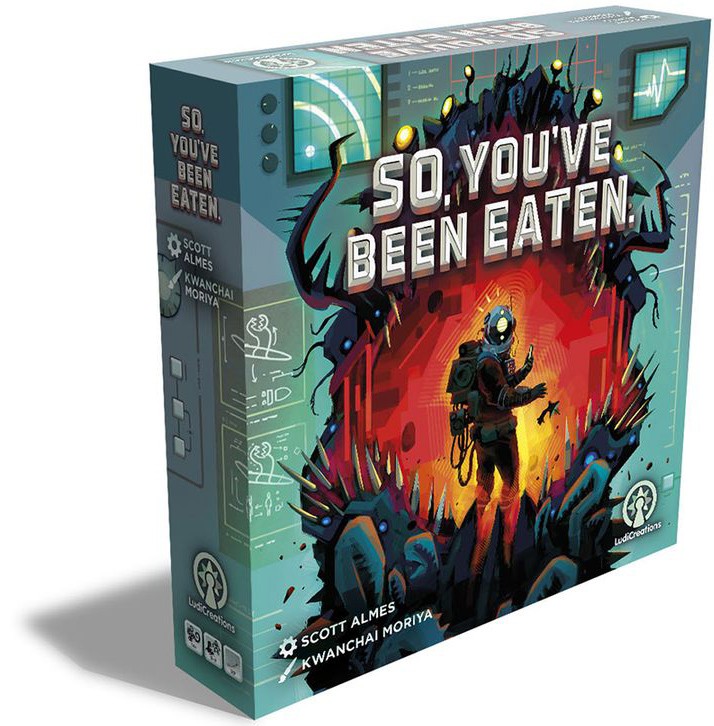 Ava: Sometimes this job is as easy as getting an email and snorting with laughter. LudiCreations apparently know just how to grab me, and that’s by telling me they’re making a game called ‘so, you’ve been eaten’.

Fantastical vore fans will be delighted to hear this is a 0-2 player game about being a space miner desperately digging for stomach crystals inside the digestive tract of an enormous beast. You’ll be racing to either mine enough crystals or digest enough miner to be declared victorious. Honestly, everything about this is ridiculous and I am here for it. The Scott Almes design can be played solo against automated miner or beast, or you can pit the two automata against each other if you just want to watch some cardboard eat itself.

Ben: Wait, so if it can be played by zero players, does that mean it is constantly being played within the box, and opening interrupts the components mid-game? I would feel rude every time I started playing it. LudiCreations and Toy Story have a lot to answer for. 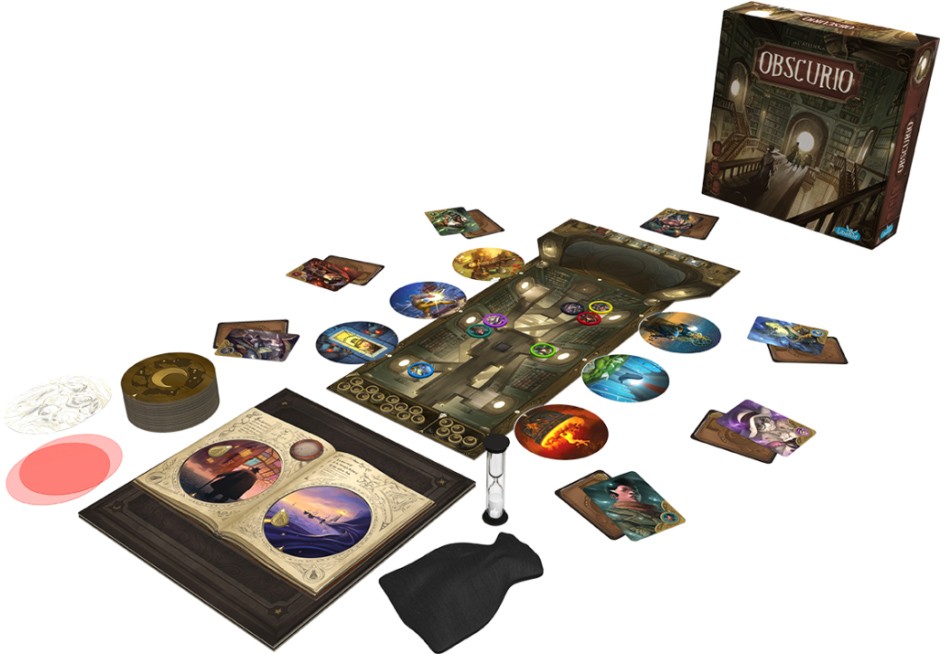 Ava: Stepping into some big, scary shoes this week is Obscurio. This is a successor to the excellent Mysterium, which mixed Dixit’s storytelling art with Cluedo’s “Let’s deduct a three part murder.”

New from Libellud, Obscurio will mash up this mashup even further. Taking Mysterium’s hypnogogic image deduction and using it to lead a gang around an infinite library of strange imagery. Obscurio’s big little wrinkle is that one of your comrades in lostness is actually trying to steer you wrong.

Getting lost in a magical library with a traitorous liar is an experience we can all relate to. (Did I ever mention I worked in a library for seven years?) There’s been a lot of these ‘guessing games with a traitor’ in the last few years, from Insider to Werewords to When I Dream. And I’ve yet to see one work perfectly, but maybe this will be the one to nail it.

Ben: I’m interested to see how they manage this in terms of difficulty. My experience of Mysterium is that it can be hard enough getting players to make the right decisions already, without the addition of a devious pseudo-wizard trying to mislead them.

Ava: I’ve already been accused of being a devious pseudo-wizard.

Ben: And in the game?

Ava (nodding sagely): And in the game. 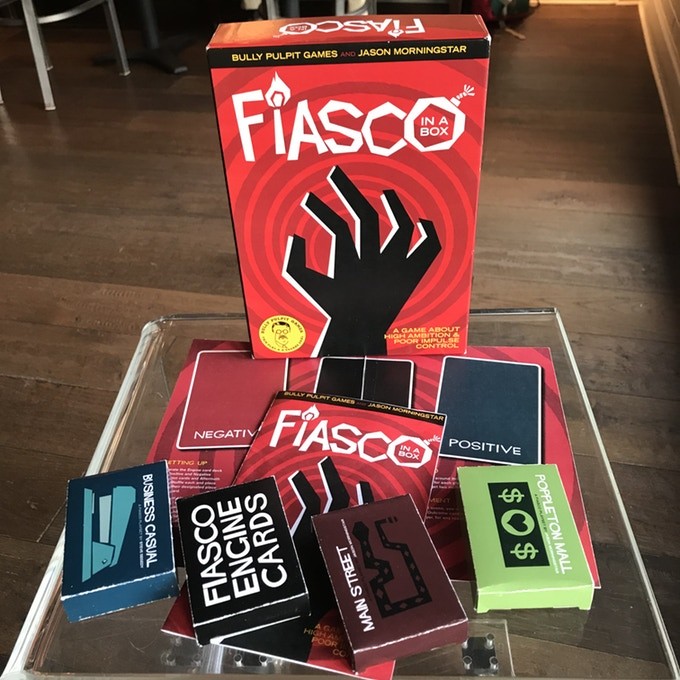 Ava: Well would you look at that? Fiasco is probably the RPG I’ve had recommended to me the most, though it’s possible that tells you more about what people think of me, than what people think of Fiasco. This Coen brothers-esque thrill-em-up is getting a beautifully shiny new boxed edition, turning a lot of the games tabular bones into lovely shuffleable cards.

I’m a little sad this will make the homebrew ‘playset’ (sets of tables that allow you to tilt the game into some very, very, very specific places) scene slightly harder to bring to the table, but I think there’s a lot of magic in shuffling a deck of cards and having them tell people what to do. Especially if the thing you’re doing is *checks notes* smuggling a trolley full of ham through a spa retreat. I’ve only played Fiasco once, and it was quite a ride.

Ben: I like how Fiasco gives players the tools to quickly build characters and relationships, which can be a big barrier to new RPG players. Most of my experience running RPGs involves grandiose plans being ruined by ridiculous behaviour, so I can see my regular Dungeons and Dragons cohort adopting Fiasco faster than a foster puppy that sneezes diamonds.

Ava: Ah. That classic macguffin, ‘the hound with the thousand-pound hayfever’ 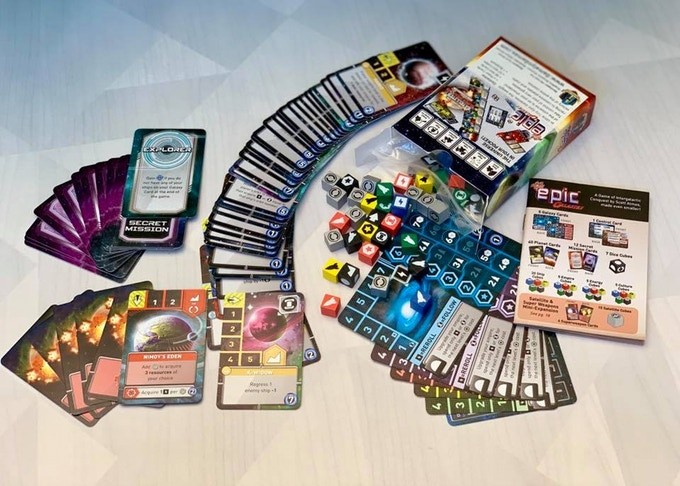 Ava: Another wafer-thin sliver of news from kickstarter this week, as Tiny Epic Galaxies gets tinier, whilst remaining precisely as epic. An already-small game is getting all of its components downsized to fit the game into your actual pocket. It’s still got enough bits and bobs floating around that it doesn’t look entirely travel-friendly, and I was only a little bit interested in the original game the one time I played it, but there’s something to be said for Scott Almes mission to shrink ever bigger experiences into ever smaller spaces. (Scott also wins the ‘double news’ award for the week, as he was the one being eaten earlier).

I’m not entirely sure who asked for this, but it’s happening.

Ben: Kudos to them for offering a free print and play version for those who haven’t played the original. The best way to know if you like a game, after all, is to play it. I look forward to when they eventually shrink Tiny Epic Galaxies into half a playing card and a 4 sided die.

Ava: The eggheads at Gamelyn won’t be happy until it won’t just fit in your pocket, but will fall through the hole in the bottom of it. Or perhaps it’ll be dense enough to create a neutron star. Either way, I’m worried about what ultra-super-tiny epic galaxies will do to my dungarees.