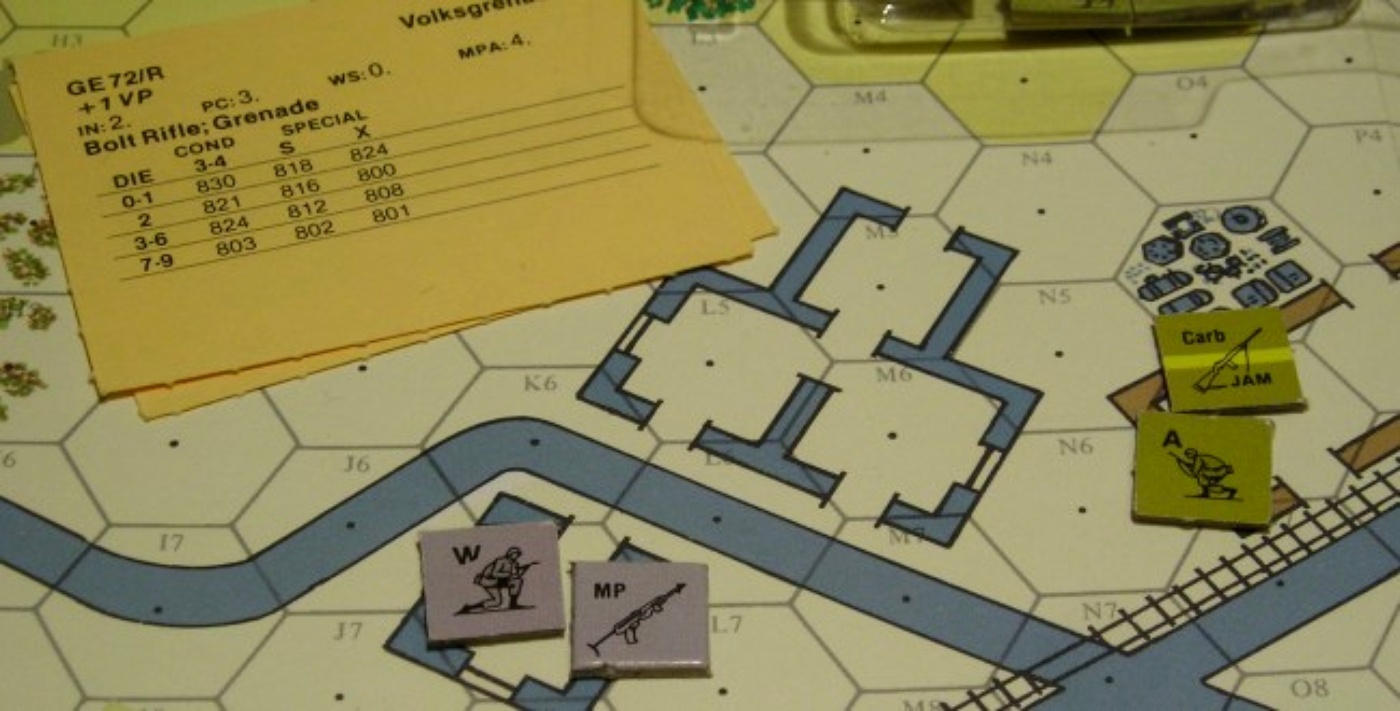 Paul: Right then, shall we look inside a box that hasn’t been opened in at least sixteen years?

You don’t get much variety in the commuter towns that sit at northernmost tip of Hampshire. They used to be villages, sometimes nothing more than pubs, but the growth of London and the reach of the automobile turned them into attractive settlements for those who worked in the capital but couldn’t afford to live there. The towns became motels writ large, nothing more than suburban bedrooms for those who drove away during the day. In time, schools were created for the children of these commuters, and those of us who grew up there experienced a life built around the motor car, a world where everything was somewhere else and all life flowed away from you down tarmac arteries.

When you’re a kid in such a lonely and lifeless corner of England, you have to kindly ask your father if he’ll drive you many miles away to towns that have things like cinemas and railways and shopping centres, so that you can wander around a shop to see if they might stock board games, to see if they might have something you want, to see if you might be able to afford it. You may as well try to find Bigfoot wandering this culturally bereft landscape.

You didn’t always come home with a hit, either, and I’m sad to say I bought a few games that I didn’t like, but Ambush! wasn’t one of them. Selected almost at random, it was one of the luckiest purchases I ever made. I don’t remember the exact age I was when I picked it up but, judging by the faded names of friends that I’ve scribbled on my squad sheets, I must’ve been thirteen or fourteen when I was first playing this. 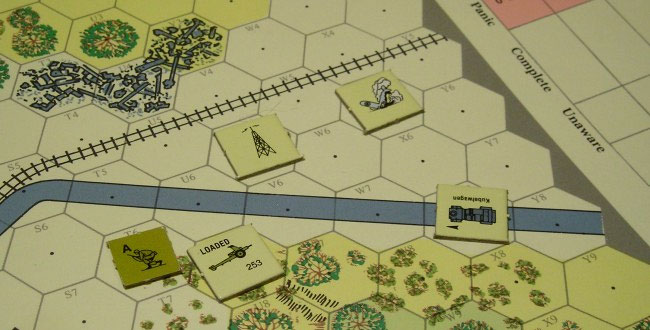 It’s a squad-based tactical wargame, which means it gives you control of individual soldiers and vehicles, even keeping track of their weapons, ammunition and grenades. It’s hex-based, it’s a game of simple counters and paper maps and it’s set in World War II. In every Ambush! mission you’ll be carefully walking your cardboard comrades around the villages of rural France as you try to flush out Nazi occupiers, capture bridges and sabotage rocket sites. Every soldier in the game, friend or foe, is extremely fragile and one unlucky roll of the die can be the end of even the most hardened veteran.

Most importantly, Ambush! is a solitaire wargame and it’s an ingenious one at that. While I could (and did) invite friends to take command of a fireteam and try to flank that machinegun position in the church, I could play this without another soul around. When you’re in your early teens and everything around you is about football and pop music and brands of clothing, that’s exactly what you need. 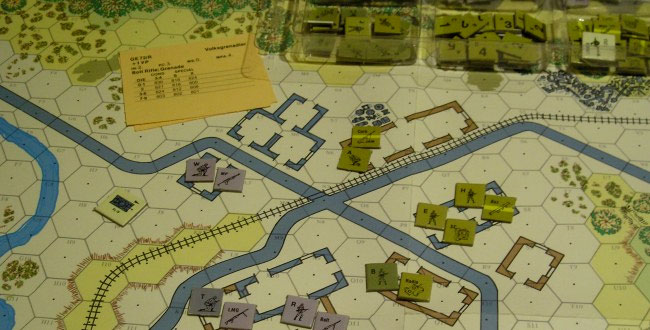 A game begins with you selecting one of the missions detailed in the manual. You then assemble your squad of eight and kit them out with weapons and equipment, bearing in mind what you think you’ll need to accomplish the task ahead. If this isn’t the first mission you’ve undertaken, then you’re likely carrying troops over from a previous outing and hopefully they’ve learned a lesson or two. You might also need to replace killed squad members and you may find that the mission briefing prevents you from taking certain equipment or gives you extra gear for free. Once all that’s sorted, you’re ready to play the game or, more accurately, ready to let the game play you. Here’s how that happens.

Ambush! is a game of creeping, creeping from hex to hex. Every hex on every map has a co-ordinate, something like C14 or R12 or H9. To find out what happens when you move someone into  hex, you need to perform a little bit of magic using two pieces of card known as a cartridge and a viewing sleeve. The process I will describe next will remind readers of a certain age of old school computer game copy protection. 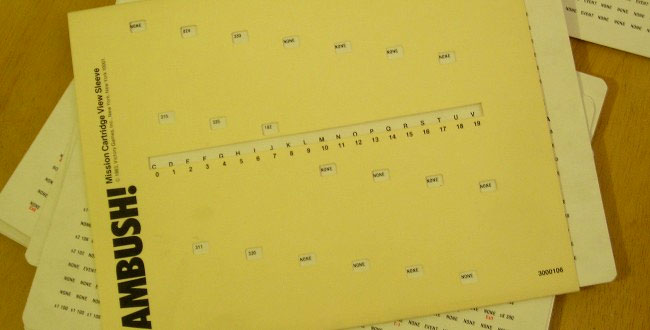 You slide the text-covered card called the cartridge into the viewing sleeve. The viewing sleeve is has a central viewing slit running through it and is peppered with lines of holes as if it has been neatly machinegunned. Matching a number on the sleeve with a letter on the cartridge to give yourself your hex co-ordinates, you find the corresponding hole that lines up with this co-ordinate and, goodness me, you see text or a number peering out at you.

Quite often, particularly at the start of a mission, the text will say NONE, meaning nothing happens and you can perform your next move. That’s great, except your next move again involves you lining up another letter and another number to see what’s revealed. You do this with every other footfall, every time a soldier steps into a new hex, and in the back of your mind you know that one of those little cardboard windows is going to show you a number. This means no more creeping. This means shit is going down.

The game comes with a booklet that has hundreds upon hundreds of numbered paragraphs and you rifle your way through this to find the number you’ve been given, as if you were playing a wartime version of a Fighting Fantasy book, and that paragraph tells you what happens on the battlefield. It might tell you that a soldier hears a sound nearby, or it might send you to another paragraph based on a particular condition (“If any US soldier can see hex K7, turn to 080.”), or it might tell you that your men have been spotted, that Nazis are about, that they’re being fired on right now and it’s time to enter COMBAT MODE. 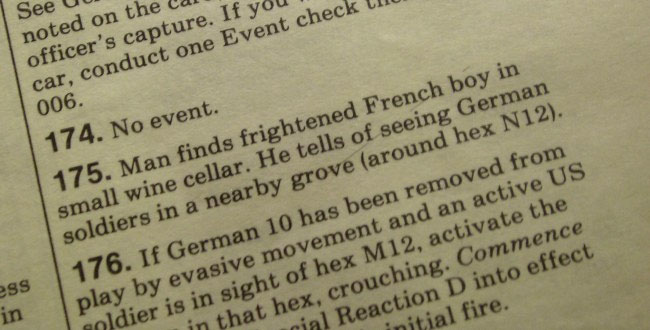 This is where Ambush! almost becomes a conventional wargame. Almost. You lay out the enemy troops according to the paragraph you’ve just read and you settle into a simple and efficient combat mechanic. There’s an initiative order that determines who acts first and the usual dice-rolling to determine who hits what, but your paragraph booklet is still in your other hand.

While you’re desperately directing your troops, each of the enemy soldiers acts according to the instructions printed on a small card, a card made just for them. Sometimes these are spelled out clearly, telling them to move to a certain hex and open fire, but most of the time these instructions are a list of paragraph numbers sorted according to die rolls and what are called condition numbers. Roll a die, cross-reference the result with a condition number and you have a paragraph that issues specific and context-sensitive instructions which may be to take cover, to open fire, to crouch, to toss a grenade. This means you don’t know what the enemy’s going to do, nor what tricks they may have up their sleeve, until you find and read that paragraph. 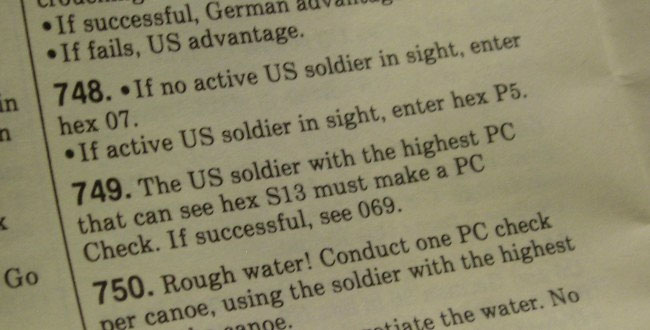 I’d better explain those condition numbers, too. You see, Ambush! doesn’t just have one cartridge per mission. You start off at condition 1, which is equivalent to Peace and Quiet and Happiness, your soldiers inching their way across the map as you’re carefully referencing those co-ordinates, but as soon as the bullets start flying you can bet that you’re going to swap out that first card as things jump up to condition 2, 3 or even 4, where even more shit will be going down. These new cartridge cards inevitably produce more frequent and more dangerous paragraph references and this is the game’s way of reflecting how the situation, uh, intensifies as Nazis come running, their ears pricked by the melodies of war.

It’s hardly ideal, because you were already running out of ammo and now you can’t make that dash across open ground to snatch a weapon from the enemy. Do you risk hand-to-hand combat? Can you pitch a grenade through that window? Is that a Panzer growling its way around the corner?

And even in combat, you’re still using that card and that viewing sleeve, checking whether stepping into a new hex might bring you in range of more enemies, might trigger a new event, might trip a booby trap. Every new step brings with it the possibility of further danger. 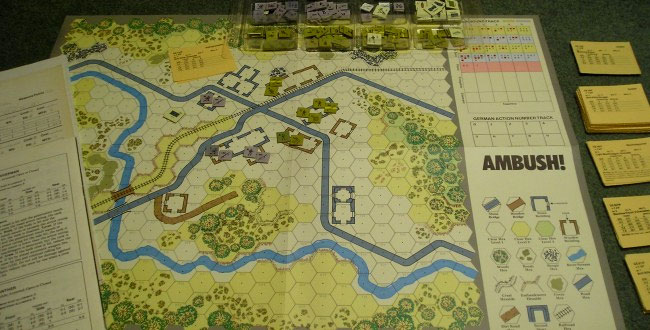 Ambush! truly is a game that plays you, a game that somehow manages to hide hundreds of deadly secrets amongst all those paragraphs and between those two pieces of card. It’s aptly named, frequently playing terrible tricks on you and throwing you head-first into danger. If you’re a savvy tactician then you’ll hopefully be able to guide your men through the many firefights they’ll fall into, odds permitting, and your reward will be watching their skills improve between missions.

It’s also a game that, I’m sad to say, has been out of print for a very long time, a fate undeserved for something so inventive. Sure, Ambush! did have limited replay value, as once you’d played a scenario you had at least some idea of what to expect second time around, but it had enough random events to keep things interesting and three expansions added not only more missions, but also new mechanics, stretching the game as far as they could. 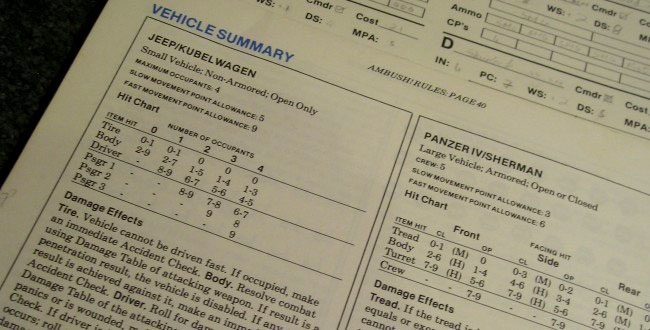 Although my memories have faded almost as much as the writing on my squad sheets, Ambush! is still an anchor to my past and as opened it up I found the air inside heavy with memories, the corners of the box still holding the echoes of imagined gunfire. Right now, I realise I could sit you down and tell you of my adventures in the Italian expansion, trying to escort a convoy through a perilous mountain pass, or my desperate attempt to dislodge a single German soldier from atop a hill as he pinned down four of my paratroopers from his position.

Ambush! was a delight. It still is. Any solitaire game’s first concern is with mechanics, with making a game that provides a credible challenge, but sometimes Ambush! went beyond this by not only introducing the genuine element of surprise, but also with the subtle embellishments that are buried between its paragraphs of narrative and instruction. Each game isn’t merely a series of random events, it’s a vignette, a coherent story that you step into one hex at a time. 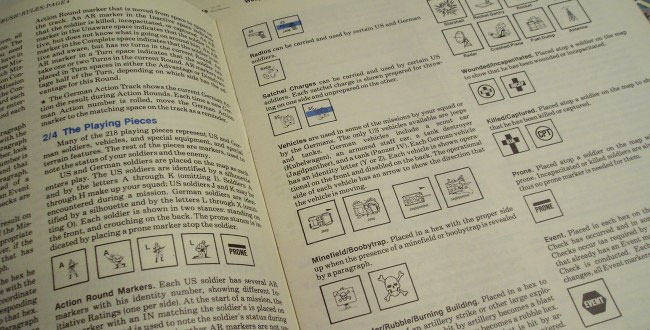 When I opened the box to begin this piece I’d long forgotten how much was inside. There are my own handwritten notes and charts for modifications of the game, where I’d experimented with introducing new weapons, new scenarios and even different theatres of conflict. Then there’s the squad roster, which I’ve split in two, because my initial squad had become too powerful, unbalancing some of the scenarios. The two squad commanders now lead their own units, which are a mix of veterans and new recruits. I’ve noted down how many times the older guys have been wounded in action. 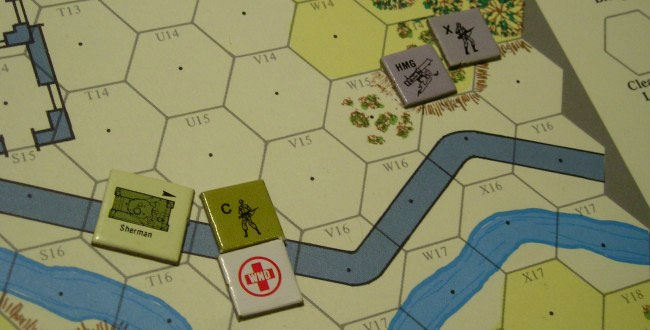 I’d also forgotten how big the manual was. It’s forty pages and, though it’s pretty straightforward, I guess I must’ve been a capable gamer back then. I think that’s a pretty good reason to be impressed with my younger self, too, because in spite of all that was happening back then, all the complications that entangle us when we’re that age, I still found time to play board games.

Looks like I was pretty good at them, too.