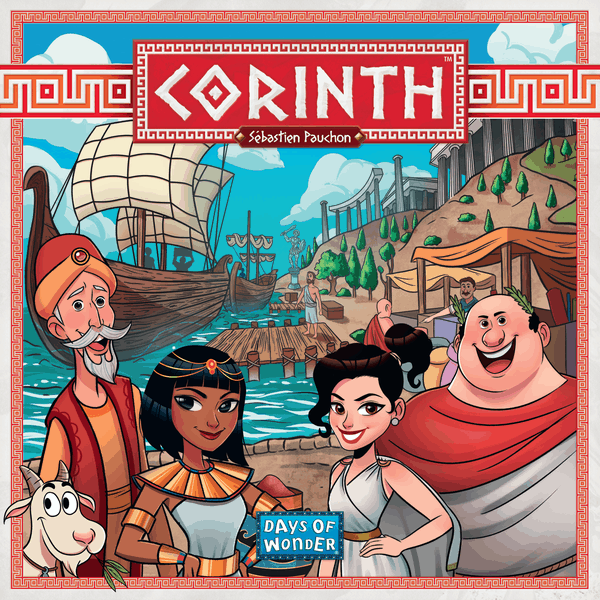 Under a blazing sun in 4th century BCE, traders come from all corners of the Mediterranean Sea to Corinth to sell their goods; Persian carpets, Cretan olive oil, Roman grapes, and Egyptian spices are highly prized by traders. Players have a few weeks to secure their place in Corinthian lore as its most savvy trader!

Corinth is a roll-and-write game akin to a dice-only version of the board game Yspahan. At the start of a turn, the active player rolls nine dice, then places all the dice with the highest value on the gold space at the top of the chart, then starts placing dice from the bottom of the chart up, with each value of dice being on a separate level.

The active player takes all the dice on one level, then the action associated with that level. The top level gives the player as many gold as the number of dice they took; the bottom level gives goats instead of gold; and the middle levels allow a player to deliver goods to a number of market stalls on their personal player sheet equal to the dice claimed. (You have four colors of market stalls, and once you start marking off, say, rugs in one of the blue areas, you have to finish marking off all the rugs in that area before you can start marking off another blue area.)

The active player can spend gold to roll up to three extra yellow dice and thereby increase the odds of getting to take a desired level; if the active player doesn’t take any of these yellow dice, they are removed from play, preventing others from benefitting at that player’s expense.

Instead of marking off gold, goats, or goods, you can use the value of the die or dice claimed (1-6) to move the steward on your personal score sheet. The steward starts in the middle of a 5×5 grid on your sheet, and you must move it as many spaces as the number of pips on the die value claimed, not crossing over any line you’ve drawn previously. You can pay 1 gold to move the steward one more or one fewer space, and you can pay as much gold as you want to do this. You can receive gold, goats, or goods from where the steward stops, but beyond that, you can earn points. When the steward stops on a corner space of this grid, you count the number of spaces circled to this point, with some spaces counting twice, then you write down that number, scoring that many points at game’s end. If you stop in another corner later, you do the same thing again, which compounds the value of all your previous movement.

You can spend gold or goats to construct buildings that give you bonus powers, such as collecting two additional gold whenever you collect any gold or moving the steward up to two spaces more or less without paying.

After 16 turns (with four players) or 18 turns (with two or three players), the game ends and you tally points for goods delivered, spaces visited by the steward, buildings constructed, and goats and gold still on hand.