Tom: Hello Ava! How is your day so far? I indulged in having a rare THREE slices of toast this morning, 33% more than my usual breakfast.

Ava: Oh dear. Returning to the homestead has lowered your standards for excitement?

Tom: I’m gearing up to film a review in a garage, Ava. It’s all downhill from here.

Ava: I got a bit dazzled last Monday when I found myself accidentally watching Reiner Knizia wearing a hard hat and matching bow tie. He was there to not win the biggest award in board games, the Spiel Des Jahres. I’m a bit sad he dressed up for nothing, but he also looked like he was having a whale of a time.

Tom: He also looks like a rogue trader pretending to be a magician.

Ava: The winners were in fact Daniela and Christian Stöhr designers of Pictures, a game of drawing things without pens. Instead you’re recreating photos using building blocks, pixelated cubes and bits of shoelace. I’ve not found myself particularly intrigued, if I’m honest, but often the details are what makes a party game sing and I’d like to give it a pop. 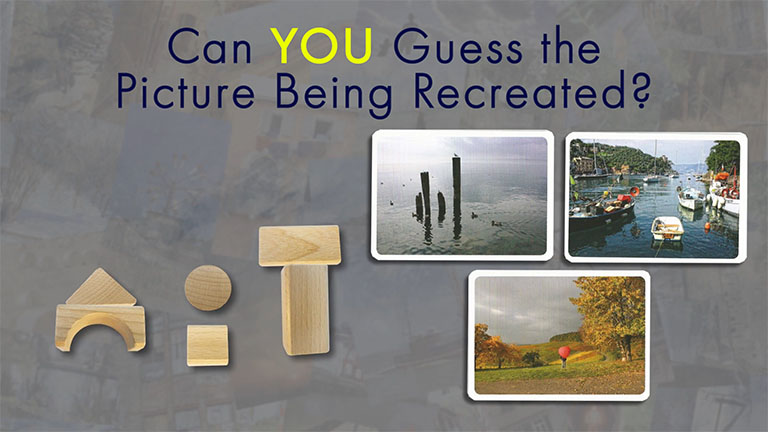 Ava: The slightly fancier Kennerspiel award was deservedly won by Thomas Sing’s The Crew, a delightfully tough co-operative trick taking game of going to space by making sure the right people win the right cards in the right order. I’m just now realising it should have been called The Right Stuff.

Ava:The thing that entranced me as much as Kniz’s bowtie was the winner of the children’s Kinderspiel award ‘Speedy Roll’. Also known as Hedgehog Roll, this winner offered a delightful video of some very serious germans talking about rolling a furry hedgehog ball into a field of paper mushrooms to make a fox chase a different wooden hedgehog. 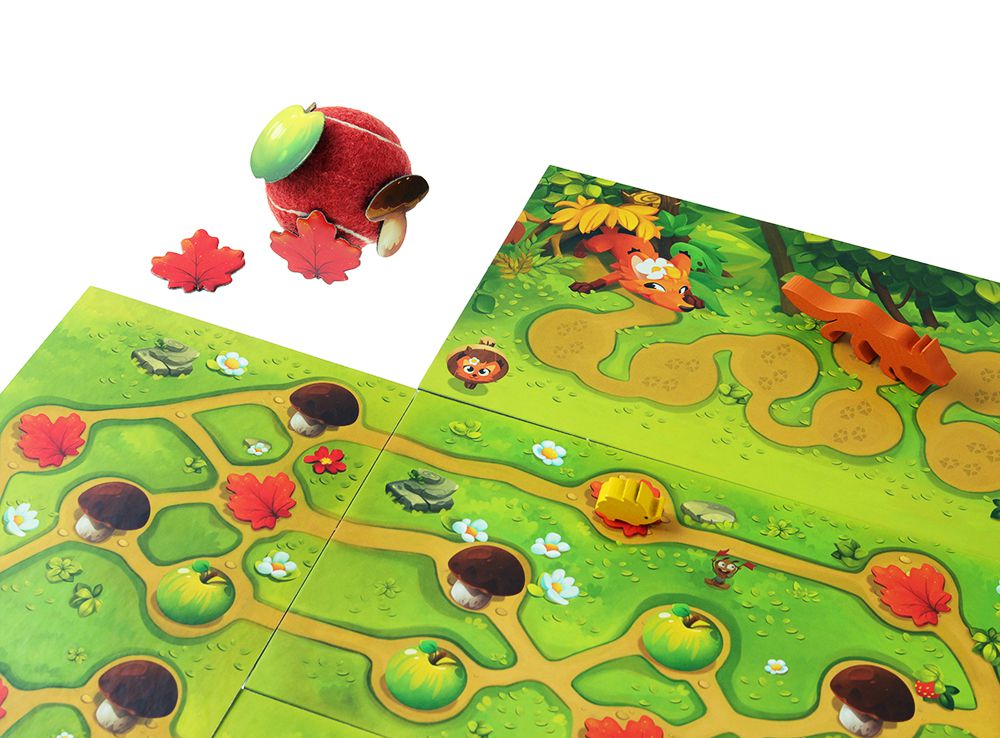 Matt: Sorry to bust into the news-shack wielding two hammers, but this is a game where you roll a TENNIS BALL around in the hope that things will stick to it? I’m unsure I’ve ever been this sold this fast. Oh to be at a games convention, scrambling underneath neighbouring tables in the hope of retrieving a missing hedgehog… 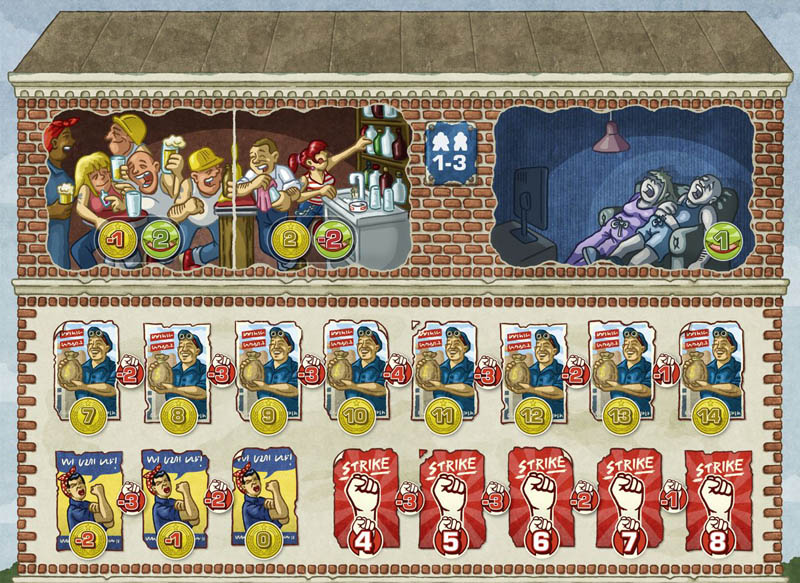 Ava: Friedmann Friese’s 2F games are finding themselves without a convention to launch their latest green box, so are self publishing a small print run of Finishing Time, a game that sounds remarkably depressing.

In Finishing Time players take the role of a group of workers, who are looking to acquire the maximum amount of leisure time, but forced to balance the fun with doing extra jobs to be able to afford holidays later, but only if you spend some other time unionising and lobbying for holiday time. 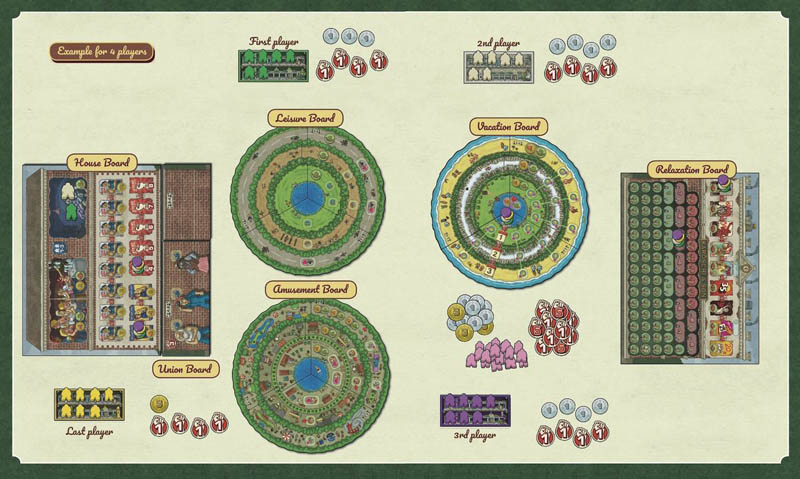 Tom: ‘After all your workers have been placed and taken their after-work actions, they are forced to return to work. You place them all in your factory where they then suffer stress, earn income, and gain strike tokens from the union, depending on the current working conditions.’ Good to see boardgames continuing to offer much needed forms of escapism.

In all seriousness though, Friese seems fairly keyed into this game being ferociously solo-able – and of course all the miserable theming is in service of what’s shaping up to be a neatly satirical little box, and one of those euros with licks of depressing realism to make those worker-placements feel extra-grounded-in-the-harsh-realities-of-the-world-at-large.

Matt: There’s a fiendish streak within a lot of their work, so it’s fun to see more bite bubbling to the surface. I still clearly recall an evening I spent playing Fast Forward: Flee in a pub with Quinns – I don’t think I’ve ever felt so aggressively, purposefully trolled by a game? 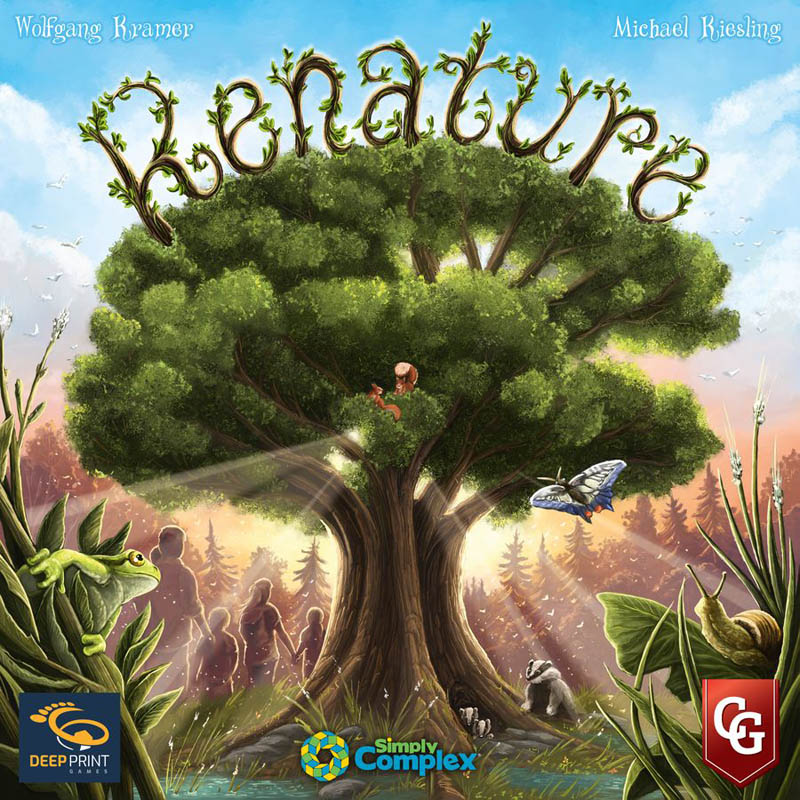 Ava: The most prolific game design duo of all has got another thing coming soon, and it sounds a little reminiscent of some of their finest work.

Kramer and Kiesling’s Renature is a domino game of area control and mischief. Each turn you have to place dominos with matching animal symbols, and then place plants next to those dominos. Whenever an area gets fenced off points are awarded for whoever has the most plants there, with ties being completely ignored. Crucially, players can place neutral plants to force a tie – leaving everyone’s work seeming wonderfully pointless.

To me, that doesn’t sound entirely dissimilar to their canal-building masterpiece, Mexica, but with fewer friendly ties and more focus on border building. It sounds like a pettily ruthless thing: nasty, brutish and beige. 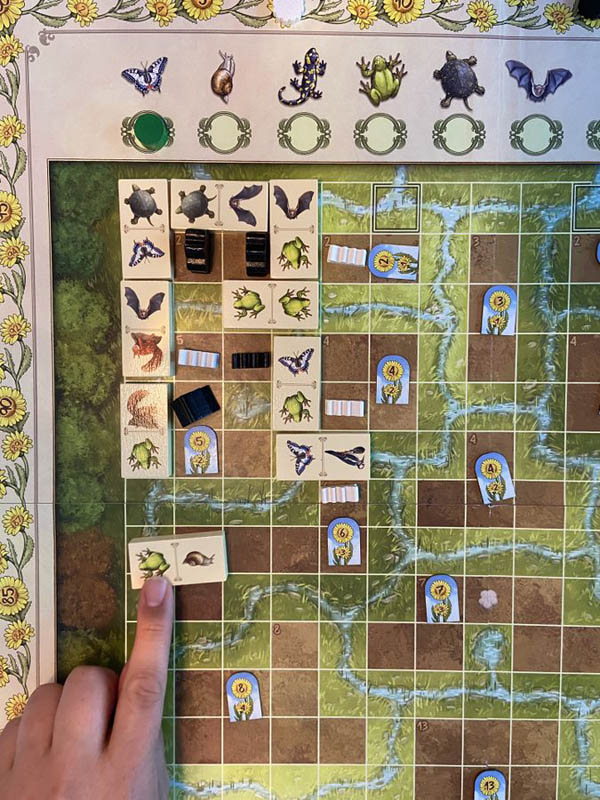 Ava: With some suitable disclaimers about the fact that we’ve worked with Alex Hague on Monikers expansions (actually one of my first jobs with Shut Up & Sit Down was helping write some card descriptions for our second box of tricks), it’s hard to ignore a new party game from the makers of two of the last decade’s best party games. This is their second collaboration with Wolfgang Warsch after Wavelength, but I struggle to see what role ‘the big WW’ actually had in a fairly simple game of stacking fuzzy things.

Tom: He gives each one a little kiss before it gets sent off to backers. 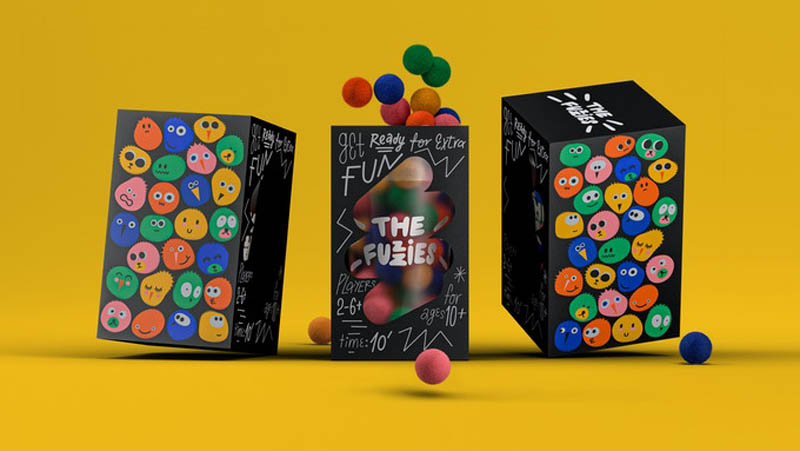 Ava: The Fuzzies is essentially tribble jenga, with tiny round furry things that inexplicably stick together in a tower precisely until they don’t. It comes in a little cup that means you’re set up in seconds and it’s bright and colourful and silly and I dread what happens when one of those fuzzy things drops into a puddle of beer at the pub.

Tom: The gif of this thing being set up and promptly collapsing is an absolute joy, and sells exactly why this thing might be a slice wonderful (even if it’s not exactly the party-game powerhouses that are Monikers and Wavelength). You just whack it onto the table and… it’s set up? And then you scoop it all up and it’s… packed away??? Gosh darn it Mr Monikers you’ve done it again.

Ava: There’s some nice touches here, like a punishment for just knocking a few of the fuzzies down, but not collapsing the stack. But I’m not really finding enough here to tug on my excitement whiskers, although it does appear to be very, very cheap. 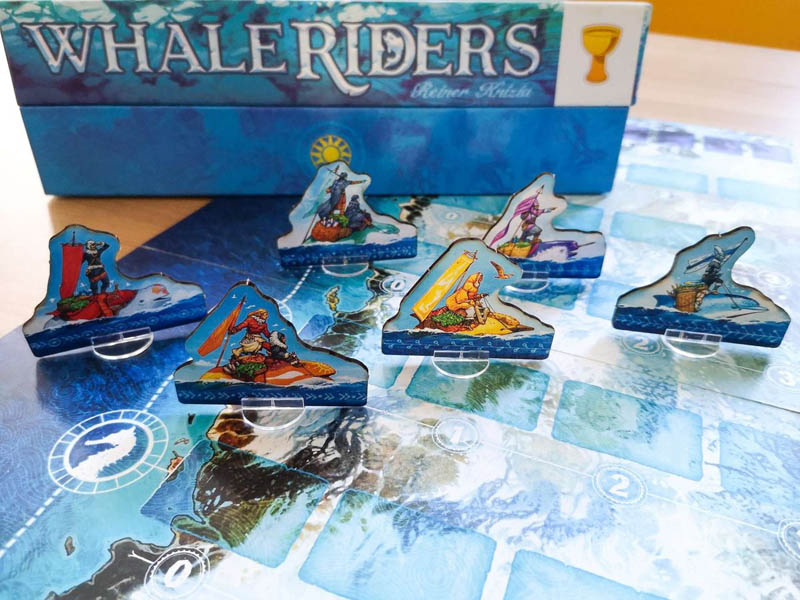 Ava:Anybody who’s spent more than three hours with me will know that I’m incapable of letting a three syllable phrase get by without singing it to the tune of Sledgehammer by Peter Gabriel. It’s great because if you do the fanfare and pause, people can actually join in. It is with heavy heart that I spot that we nearly let Whale Riders slip off kickstarter before I’ve had a chance to go: “Duh daaaah …… Whale Riders.”

Tom: Pack up the games news and bring me a Peter Gabriel, we’re going on tour.

Ava: Whale Riders is the latest collaboration between Reiner Knizia, Vincent Dutrait, and Grail games, who’ve been publishing pretty new editions of the Kniz’s biggest auction games for a while now. Whale Riders is something new, but with that classic Kniz glitz (or anti-glitz, depending on how you feel about careful calculation of value). Players will race up and down the coast, buying things from each port to fulfil contracts, initially to earn money for the buying of stuff, and later to acquire pearls, which is what wins you the game. It sounds like an interesting balance of racing, jostling, shifting markets and careful timing. 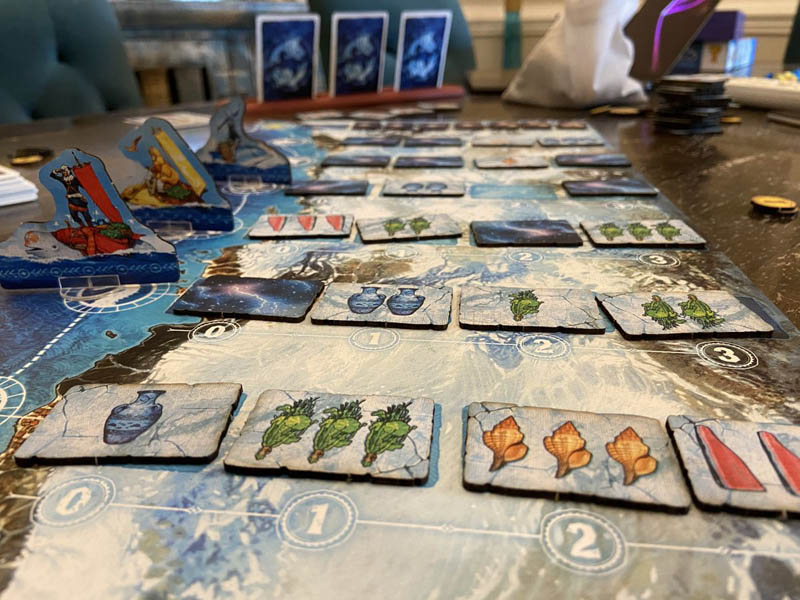 Ava: Also available only through the kickstarter, is a card game version of Whale Riders, that’s actually a reimplementation of an older Knizia design called Trendy. I don’t know anything about it, but I’m instinctively much more hype for a game called Trendy, because I love calling people trendy when they’re wearing some nice clothes, because it makes me sound like my mum.

Tom: My mum is continually amazed at how often I say ‘natty’, a word that has seemingly slingshotted itself in and out of the orbit of acceptable adjectives within her lifetime. ‘Natty’ is a great word and I stand by my use of it. I hope she reads this.

Tom’s Mum: Very natty work Thomas. WAIT HOW DID I GET HERE WHAT IS THIS PLACE I WAS MAKING LUNCH. 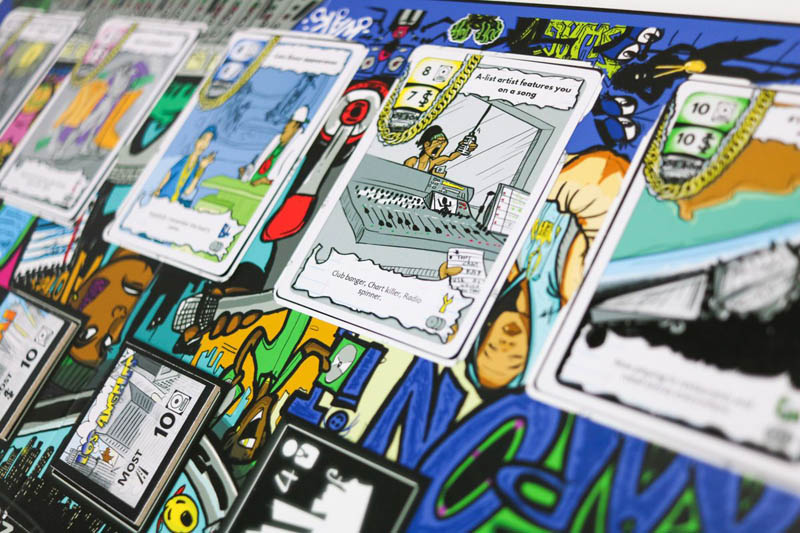 Ava: Omari Akil has a cracking opinion piece over on Dicebreaker, providing concrete examples of ways that a more diverse (and specifically, more Black) games industry would make tabletop gaming better for everybody. I still want to try his first game Rap Gods, and I firmly agree that it would be great to hear more Black stories in the games we’re making. He offers some very specific examples of things he’d like to see, and I hope we get some of them.

Matt: And that’s the wrap on the news for this week! Finally though, a quick update on this week’s Twitch streams. Tomorrow myself and Tom will play Hanamikoji, while on Thursday we’ll be joined by Ava for some fun with Consulting Detective: The Baker Street Irregulars! (we’ll be playing the free demo, so no worries about spoilers.) See you there! 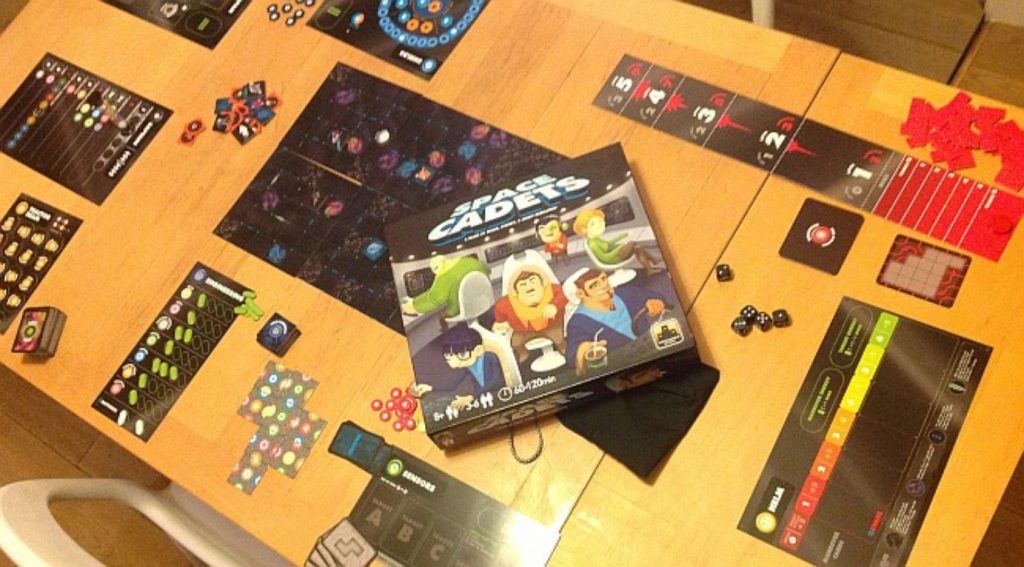