Ava: Tom, Tom, bring me a mug of hot lemon and ginger, a feather boa and five microphones.

Ava: When you flick at a fox and you write in a box

Ava: Sonora is new from Pandasaurus and does mark itself out from the crowd, promising an unholy mix of crokinole and a roll and write. With gorgeous desert theming and a ‘flick and write’ structure, I’m excitedly baffled. You’ll be flicking pieces onto a central board, and where your piece lands decides which quadrant of your own little sheet of options you’ll be scribbling something in. Each quarter-page of the write-y bit is named after a different desert animal, and promises its own little lump of game: we’ve got something looking a bit like a crossword, a route builder, and two different flavours of numberwang? 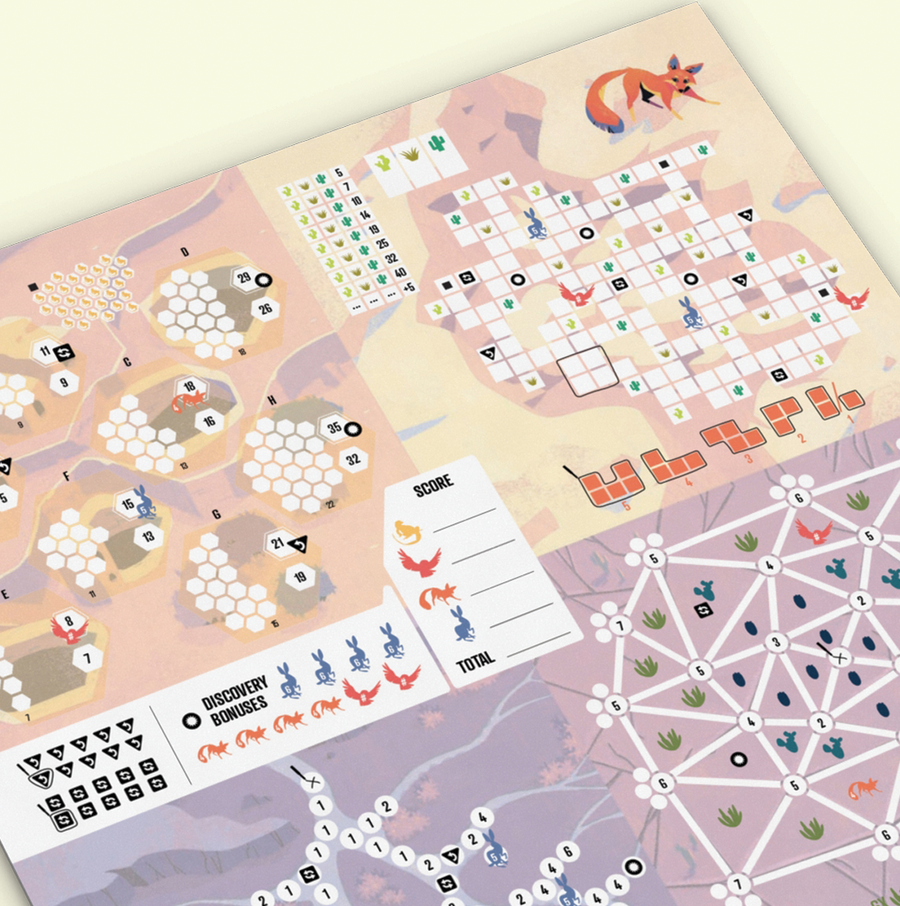 Tom: Having the numbers printed on the discs you’re flicking is a fun way of tempering the randomness that can put some people off these games – if you’re good enough at the flicking minigame, you could provide yourself perfect ‘rolls’ for the writing bit. Well, until your friend pings your nice discs into other sections of the board, leaving you stuck playing owl bingo instead of sweet, sweet lizard tetris. Ugh. I hate nature.

Ava: Roll and writes tend to be pretty inscrutable at a distance, so it’s really hard to say whether this one will sing, but it does promise something unique. I’ll be keeping an eye to see if that’s ‘uniquely great’ or ‘uniquely rubbish’. 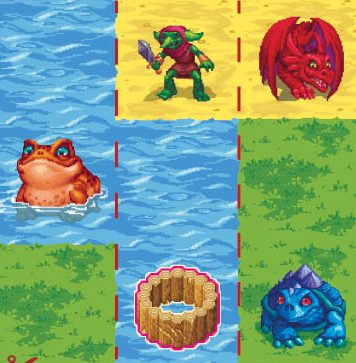 Ava: Cut my cards into pieces.
This is my last game board.

Cutterland’s press release really labours the pun of its ‘cutting edge mechanics’. I recognise I should be here for that sort of funny business, but ouch. It’s not even the first game we’ve covered about slicing up paper and divvying them up amongst the players. That’s what’s on offer here, with the cards themselves being chopped up and distributed, whilst everyone tries to build their own 8 bit inspired landscape.

Tom: It’s the Kingdomino: Legacy that no-one asked for! Except the Legacy element isn’t a legacy element at all – it’s just pure, untempered destruction.

Matt: I don’t plan on leaving behind a legacy that stretches much further beyond untempered destruction? I mean, if you’re lucky I might also leave behind a really quite high quality non-stick pan?

Tom: Going back to the game – I like the way that the drafting mechanic of the snipped-up pieces reminds me of the way I share things with siblings; I’ll divide – you choose.  Although it’s pretty worrying to see the rough rules explanation wrongly asserts that ‘nobody likes frogs’.

Matt: I literally only chipped in to this bit to pop up and say how much I like the smug ‘n’ cheeky frog. 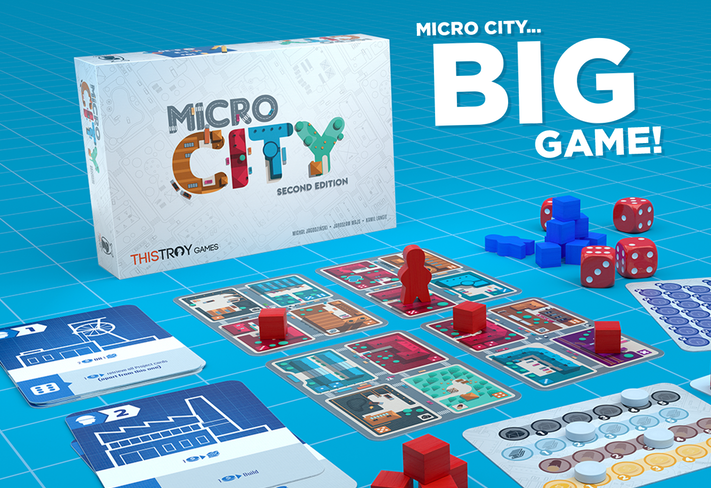 Matt: I feel I should step in at this point at make it clear that a lot of these don’t scan terribly well, and are arguably “A Crime Against Music”. I won’t be taking action at this point, but the Bassoon of Damocles is hanging above the pair of you.

Tom: Micro City looks cheap and cute as all cut-price heck. A new edition of the original 2018 title, players take the role of architects building a miniature metropolis out of cards, dice, and one trusty engineer – with the twist that they can play this game in whatever small space they deem suitable. Airplane tray table? Sorted. In the cupboard under the stairs? Sure thing. Amongst a half-eaten breakfast burrito, three crushed cans of special brew, and a small pile of board game manuals? I really ought to clean my desk, but we can make it work, darling.

There’s a print and play version for just £2 if you want to dip your micro feet into the tiny waters before going all in. Mint Works feels like the microgame for me after playing it a tonne on a holiday a few years ago. I’m curious to see if this fresh challenger can take the throne.

The game is so small that the higher Kickstarter reward tiers are just… more copies of the game? The top tier is 20 copies of Micro City – which you could distribute to your friends, family and foes like business cards, or perhaps throw them from the top of a bus like a cardboard philanthropist. It’s your cardboard, baby, make it rain.

Ava: Shut Up & Sit Down does not endorse the hurling of microgames from heights into crowds.

Tom: I am the mayor of this [micro]city, I do as I please!

Matt: The last mayor of microcity went to jail for 12 years. 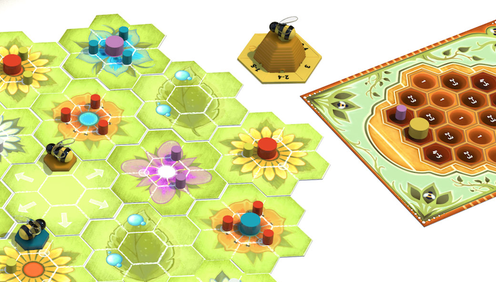 Ava: Cash rules everything around me. BEEZ! Get the honey. Stripey stripey bee y’all.

Tom: You know you could have done ‘Wu-Tang killer beez, we are the swarm’ there, right?

Ava: I don’t know what you’re talking about.

Beez is new from Next Move games, publisher of the superlative Azul. You’ll play as the titular bees, finding routes to bounce from flower to flower and storing nectar in your hive. Details are scarce, but art from Chris Quilliams is a good sign, and the flight of the bumblebee is a pretty adequate soundtrack.

Tom: Ava, we know so little about this game that W Eric Martin referencing the designer saying ‘your movement dial also controls how you store nectar and affects how you score points’ is actually the most detailed information available.

Ava: I know Tom, but from now on every time I hear one of my favourite raps my brain is going to shout bees. I think spreading that particular neurosis is worth a little vagueness.

Matt: Cutting through your vagueness like a hot spoon through honey, I actually played a prototype of this game in Denmark last year – it’s a nice and sweet little thing. For the record, this is also the only time within 2020 that I will tolerate the usage of a Z in a place where an S should be, thanks.

Ava: It’s genuinely painful how heavily you have to stress that en to make it work.

Tom: Always happy to make you suffer for my art.

Matt: I’m not sure why you’re acting as if you won’t be both be facing the consequences for all of this? 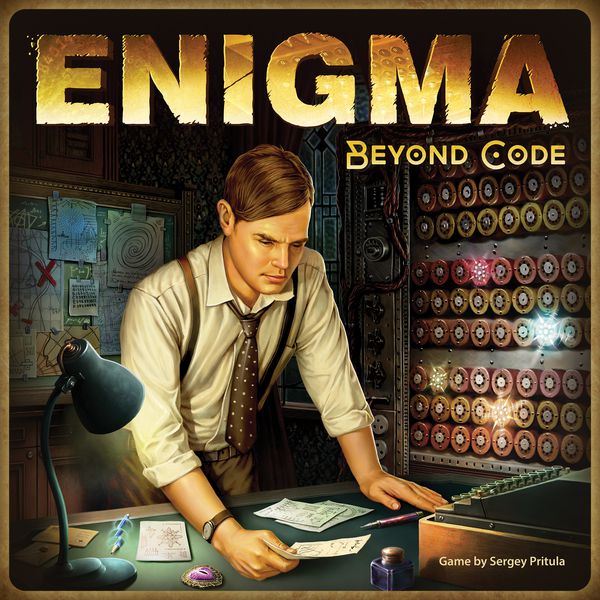 Ava: Enigma: Beyond Code wins some kind of prize for most elaborately misrepresenting the goings on of Bletchley Park during World War Two. One player will be trying to break the Enigma code while everyone else is just pretending. Oh, and it’s all haunted and monsters and stuff.

I’m intrigued by the promise of 5-10 minute games of deduction, bluffing and puzzling, so long as it squeezes some depth into that short play time. Players will explore the mansion and reveal details of the items held in the room they draw from a random deck of rooms, except they might be lying to hinder you, while they attempt their own secret objective.

Tom: The description seems to have nothing to do with cryptology or codebreaking – just a bunch of dudes stumbling around a mansion whilst trying to put a stop to ‘a non-measurable force lurking beyond the boundaries of our world and eager to consume all its flesh’. Perhaps the “yes, and…” impulse ran unchecked with this one, or maybe a creative hijacking similar to that sketch from ‘I Think You Should Leave’?

Matt: I was utterly bamboozled by everything about this, right up until the point I started taking a good look at the box art for the game? Now I’m 100% sure that what we’re looking is literally just a dream someone had that’s been sucked into reality because of bad, weird magic.

Ava: I’d be interested to see if this game can avoid just being roundly frustrating, because ‘one person trying to take their job seriously while everyone else just mucks about trying to look busy’ is a pretty accurate description of every office environment I’ve ever worked in.

Tom: Were you ever the one taking the job seriously? 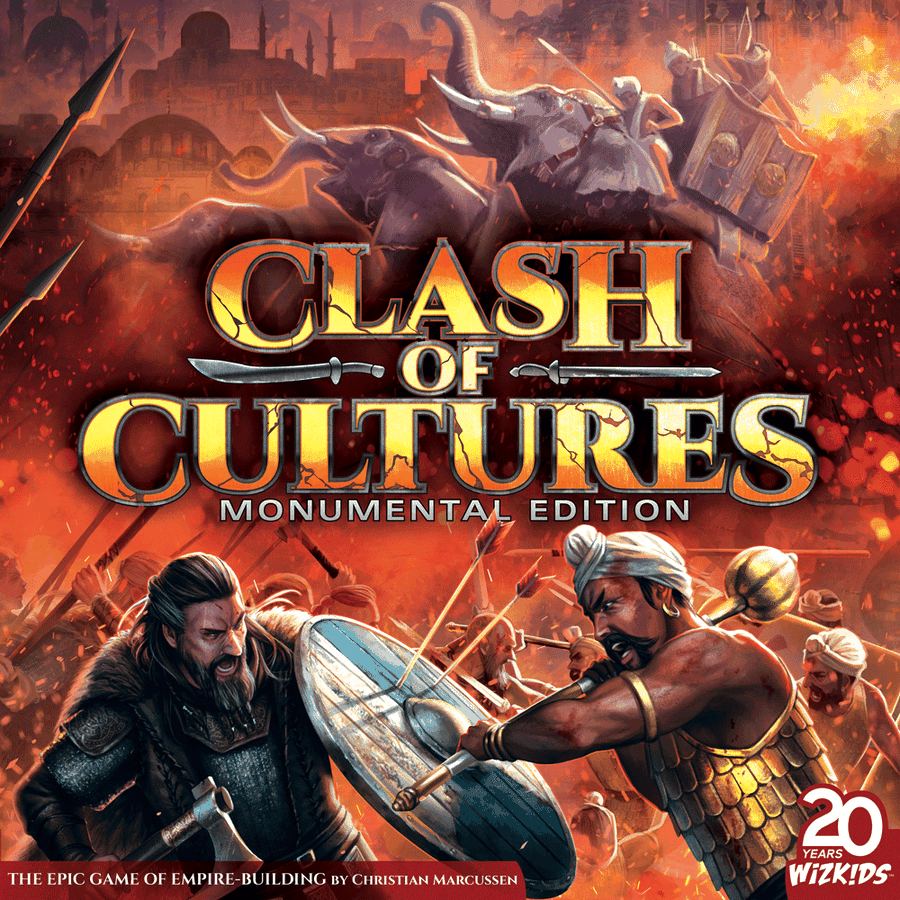 Ava: That’s a double one, because it’s by the Clash, see.

Matt: Ava, I’m going to need your badge and your pun.

Ava: Clash of Cultures is a game I played once a very long time ago and can’t remember what I thought about it, sorry. Somebody must have liked it, as it’s getting a new ‘monumental edition’ from WizKids, with the core game and all the expansions wrapped up in a monolithic box. It’s a fancy civ game with some pleasing streamlining and quite a lot of interaction, although I remember it suffering from being a bit of a ‘how well have you grokked the tech tree’ take on the civ genre, rather than one where you feel like you’re ruling an actual civilisation. That said, I do love hunting for combos.

Tom: The BoardGameGeek description of this game literally made me fall asleep in my chair.

Ava: But Tom, you can ‘Grow your civilization, advance your culture and tech, and leave your mark by building wonders!’ It’s what board games are made for. I’m going to leave Vice’s recent criticism of the civilisation video game genre’s approach to history right here. Not because it’s necessarily relevant to Clash of Cultures, but because I’ve been looking for an excuse to link to it for weeks. It works as our ‘and finally’ link to something that isn’t just a game being announced.

Tom: Well, thank goodness that’s the end of board games karaoke. I feel a deep seated embarrassment about my performance and it’s only Monday. Next week I get to choose where we go for the games news, okay?

Ava: Oh no. Why have you got a mallet? 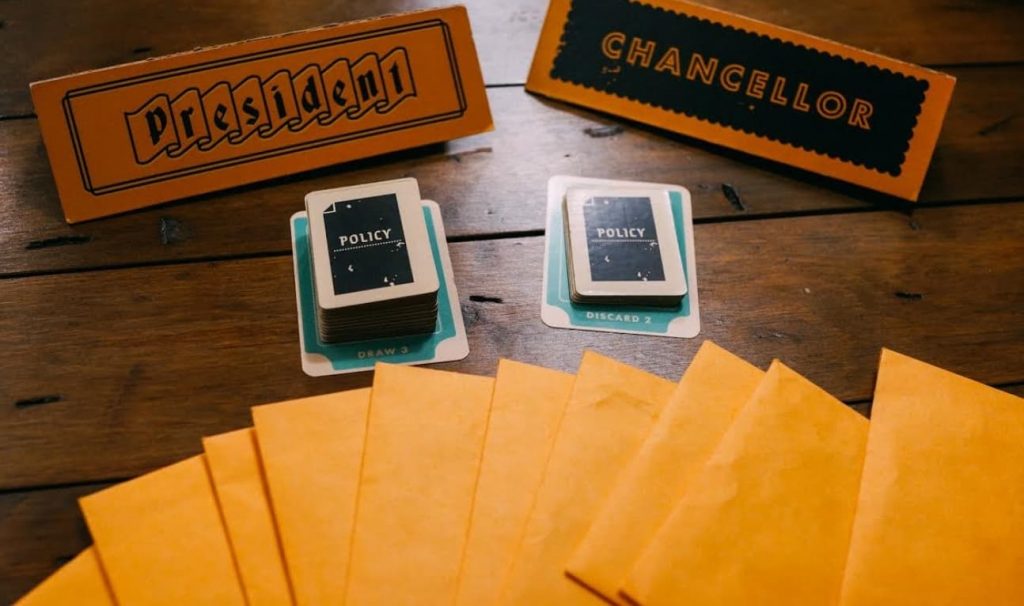