Ava: Turns out the first line of that song is ‘do you remember the twenty first night of september’, but we already used that joke already earlier this month even though we were due to do the games news on the actual 21st of September. We wasted the joke! It wasn’t the right time!

Tom: At least you aren’t calling me Ronald, like last week.

Ava: Go back to bed Ronald. It’s time for a games news disco. 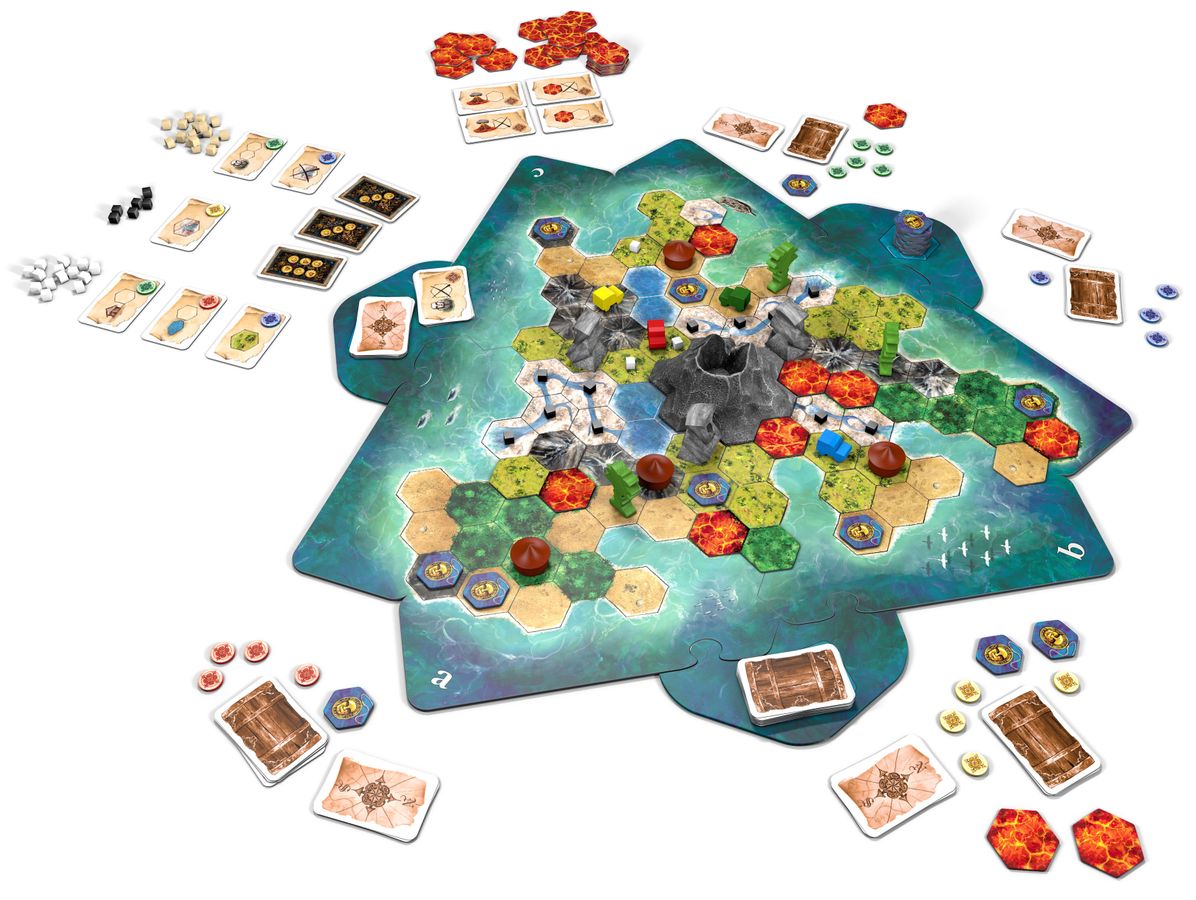 In case that wasn’t one hundred percent clear, Tobago, a game made a million years ago in 2009, is getting a volcanic expansion.

Tobago is a game of searching an island littered with stone statues looking for treasures. Players take turns driving adorable little jeeps across the island and playing cards that slowly round down the number of possible places the treasure might be in. Both of these elements create a race to get to the right space, at the right time: once it is the only place the treasure could be. The expansion adds a volcano to the treasure hunting deductathon, which means there’s hot new ways of getting in each other’s way. 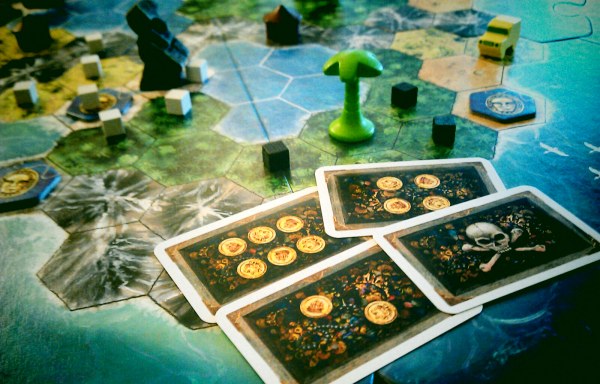 Why do I bother mentioning an expansion for the ancient game of Tobago? Well, it’s because I have beef with Quinns for his pre-Shut-Up-&-Sit-Down-historical recommendation of the damn thing on Rock Paper Shotgun. That review meant Tobago was literally the second board game I bought as an adult, and I think it’s rubbish. Damn you past-Quinns!

Quinns: Let’s give Tobago credit where it’s due, though.

Quinns: Even today the… it… the board is a really interesting shape.

Tom: To put a pause on this beef for a rare minute, we should probably talk about what this expansion is actually bringing to bago. Spoilers; it’s mostly to do with lava. In this expansion, players will have their treasure hunting periodically interrupted by spicy water, which will shunt treasures around by changing the very clues that you’re using to deduce the location of said treasure.

For example – a clue might be that the treasure is ‘in the largest forest’ – but after a cascade of the Good Hot Juice, that forest could be naught but cinders, teleporting the træsures somewhere else entirely.

Ava: It’s exactly that sort of treasure-teleporting nonsense that makes me freak out. GRUMP. 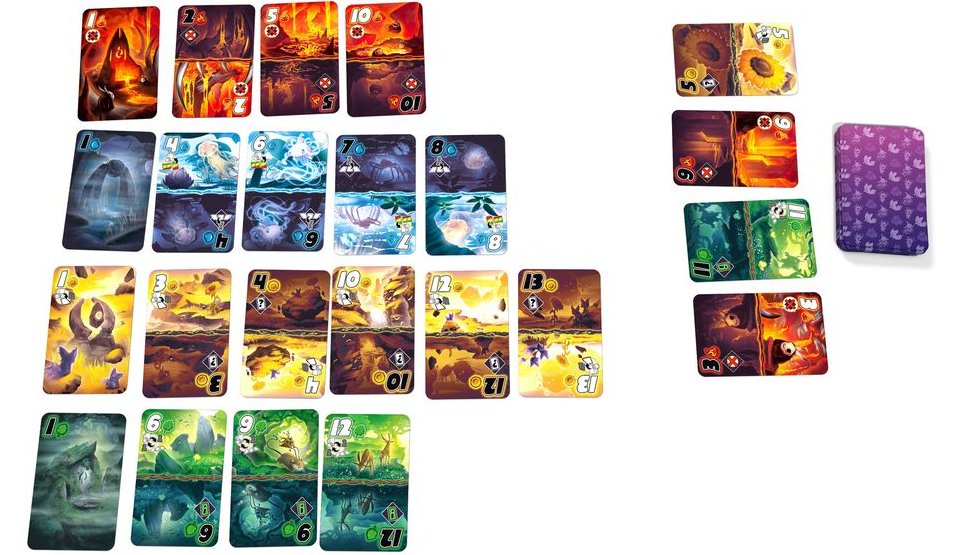 Tom: Silencio is a new co-operative game of not talking and trying to figure out exactly where to put cards, in the vein of The Mind and The Crew. The Silencio, however, asks you to put some cards in order…. But not too in order?

The game dishes out penalties for getting your numbers too close, and bonuses for risking slightly higher cards that might prevent a teammate from being able to place theirs. There are also some shrines that’ll give you one-off benefits, and a couple systems for making the game easier or harder based on how your group is scoring.

It sounds a bit more deductive than The Mind, and a slice more faffy than The Crew – but on the other hand, I could yell ‘SILENCIO’ at the beginning of each game. 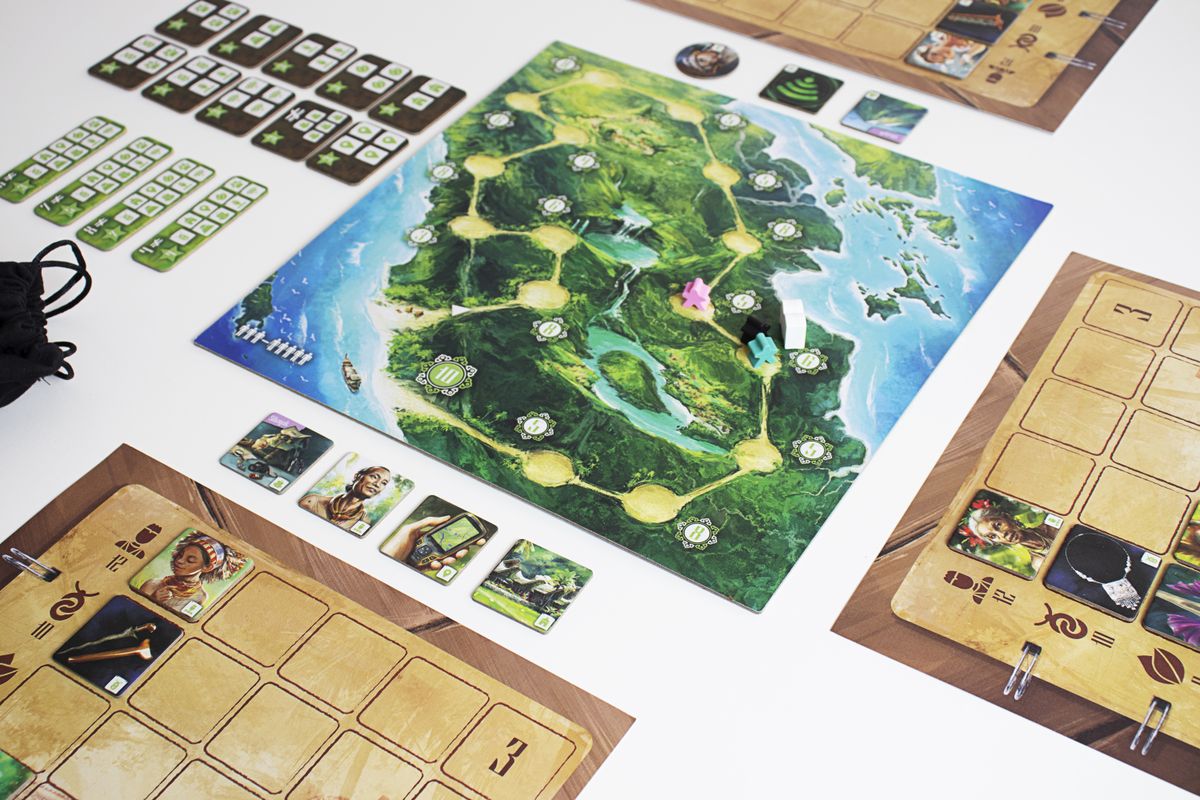 Okay, it’ll be released this coming Friday, but the next Podcast includes an absolutely storming bundle of big beef relating to fabled board game designer Reiner Knizia, and as such I’m feeling pretty positively disposed to the Good Doctor.

Sumatra is the latest Knizia joint, and as with many of his games, it’s hard to parse at a distance, but could be interesting. We’ll never know (unless we play it, I guess). It’s a game of trying to make sure you’re well prepared enough to handle a volcano, or have enough GPSes to find a particular village.

The fun weirdness comes from an exploration puzzle where you appear to be…chasing after a sentient notebook? Depending where your character is in relation to that notebook, you’ll be able to move forward, shuffle tiles or just run to catch up. However you’re moving around the board, you’ll get the opportunity to add information tiles to your own little notebook of a player board, where you’re trying to arrange the information into something that will actually help you.

It sounds like an odd mix of set collecting, with careful placement of those sets and all the notebook chasing nonsense I don’t entirely understand.

Tom: I really love that as well as collecting research on local flora and fauna, you’re also set-collecting as much (what looks like) WiFi as possible. 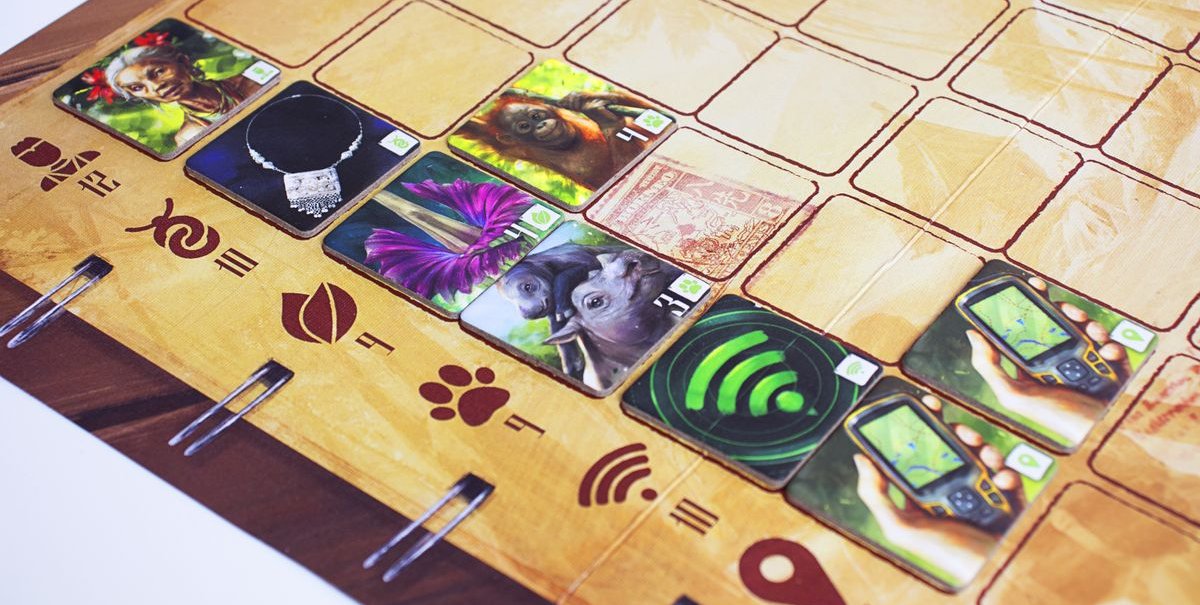 It’s like being in my house right now – there are far too many of us, and the internet is a precious commodity; hoarded by the greedy few and fought over by the hungry many. I’m the greedy few. I’m playing the game already. And I’m winning. 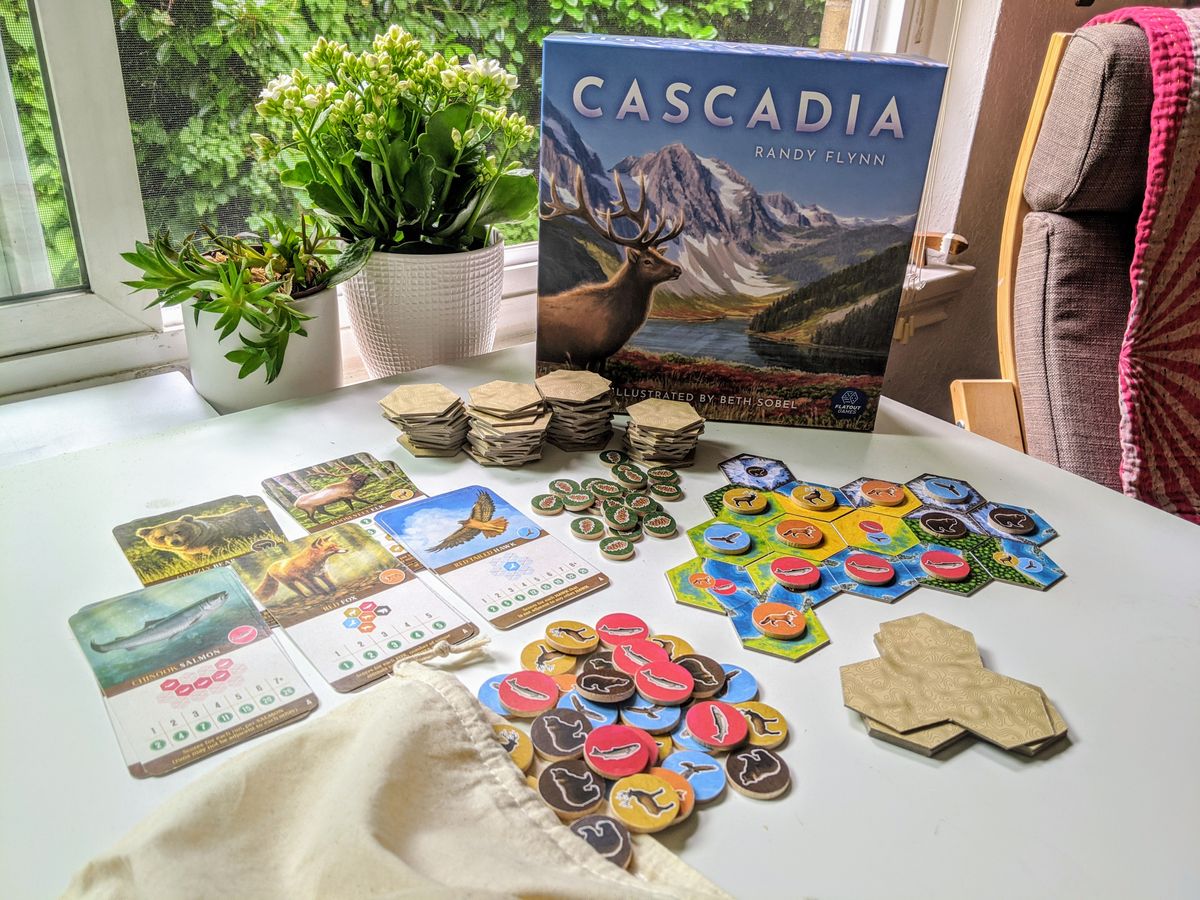 Cascadia is the latest from Flatout Games, who brought you Calico, which is a legitimate reason to prick up your ears. Even more heartening, there’s a little web app version of the game that means you can try the solo version right now! It was simple enough that I figured out two thirds of the rules just by opening it up and messing around! I then got a terrible score because of the other third that was actually important.

Cascadia promises a two-layer tile-laying puzzle, with each adorable hexagon representing different habitats and biomes. Each tile can house a small range of species, but only one per tile. Each of those animals scores differently according to how you arrange them. When you take a tile, you also take the animal that was placed beside it, and can place it on a valid tile that doesn’t have another animal already.

BUT THAT’S NOT ALL. Underneath all the animal shenanigans, you’re also trying to score points by creating the largest possible corridor of the same-coloured landscape. It’s cute, straightforward and I’ve literally just taught you the whole game (I think), so I’ll be honest, I think this is ace.

In other news, it always surprises me that I’m actually a sucker for anthropomorphised fantasy animals.

Untamed Feral Factions Spirit Strike Edition has too many words, but the correct amount of fantasy animals, according to my increasingly convoluted yardstick. It’s a card battling beat-em-up so you’ll be facing foes and flinging feral fighters in the form of cards on the table. The bit that grabs my eye is the ‘pick three faction decks and shuffle them’ bit, so you could be sending chameleons, deer and bears to mess up snakes, rhinos and raccoons.

It’s quite possible I’m just missing Champion of the Wild, now I’ve said that out loud.

Tom: You know, it sounds a bit (a lot) like Smash Up? A game I bought when I was but a board game boy – and as such I have no idea if it holds up at all .

What does hold up is the art for Untamed: Words Words – Words Words Words. Judging by some of the cards they’ve got on show, the factions have distinct personalities with neat variations between each card – and the more unusual animals (Chameleons! Snakes!) are extra exciting. This could be nice, if goading animals into hand-to-hand combat is your thing, you monster.

Ava: I didn’t know you used to be a Nintendo GameBoy™

(Ava prods Tom’s A and B buttons, hoping to play the music from the second level of Super Mario Land on loop.) 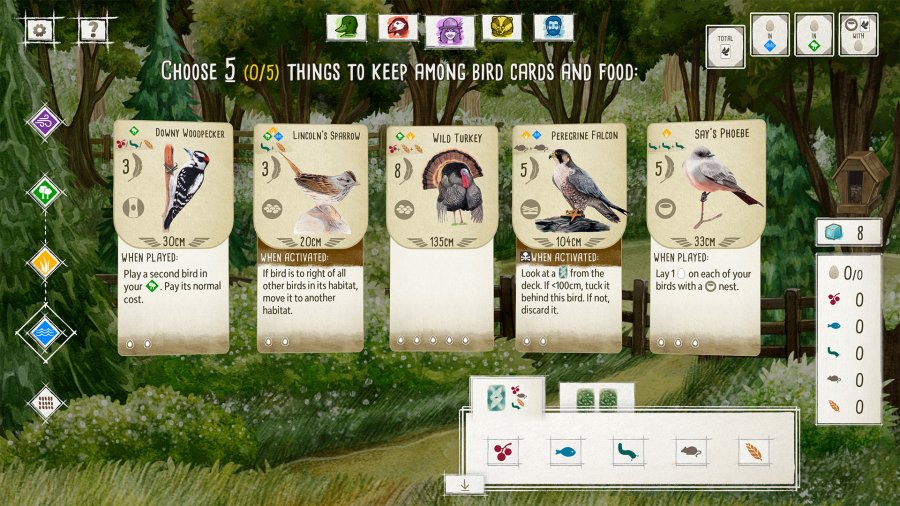 Ava: Just a little digital news nugget for you here. We don’t often cover so-called ‘video games’, but we thought it was worth a mention that the Wingspan app has now been launched, and you can take a peek at an earlier build at the beginning of our lovely Let’s Play of Wingspan with designer Elizabeth Hargrave. So I’m plugging the app as an excuse to plug one of our own videos. What a plug-fiend I’ve become.

Tom: In other app news, Root is coming to YR PHONE (be it a ‘pple or an droid) on the 24th! That’s… three days! This isn’t really news, it’s just me being an excitable child who wants more Root.

Ava: I also got an email today saying that there’s now multiplayer online co-op in the Gloomhaven digi-version, a feature I would’ve assumed it already had. That’s alongside new apps for Game of Thrones and Blood Rage. Everything’s gone very digital, is what we’re saying. Even these words are actually, secretly, digits.

Ava: Whatever you do, don’t look at your fingers. 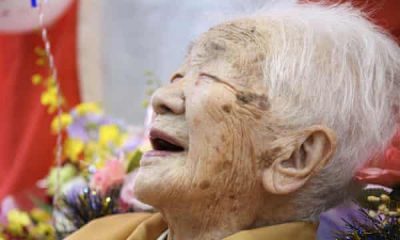 Is this board game news? Only barely. Tanaka Kane is 117 and still playing board games with her pals, along with a tastily non-specific cola beverage. I can only assume she spent her birthday absolutely wrecking a 112 year old’s plan to take King’s Landing with a more nuanced understanding of the rules for ports in the Game of Thrones board game. 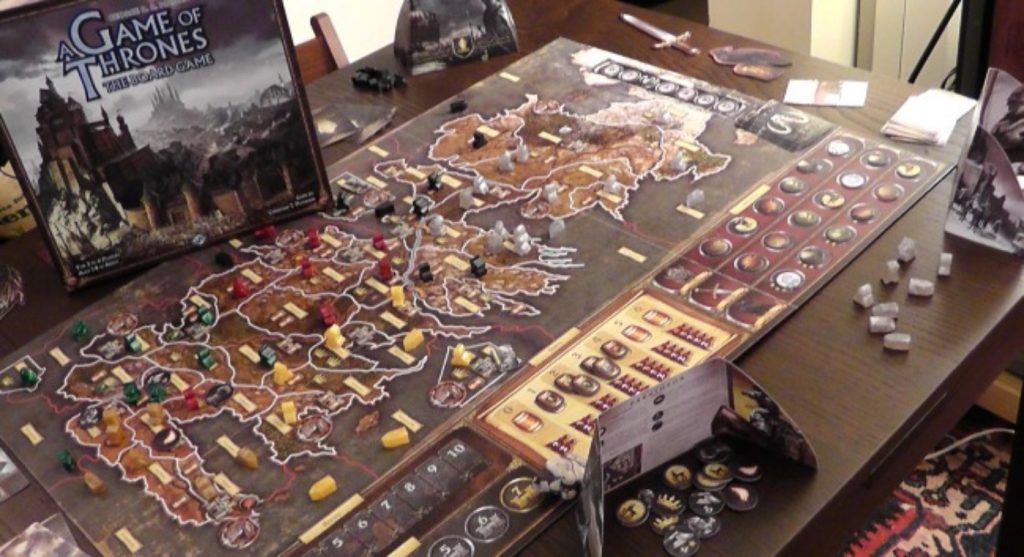 Review – Game of Thrones: The Board Game 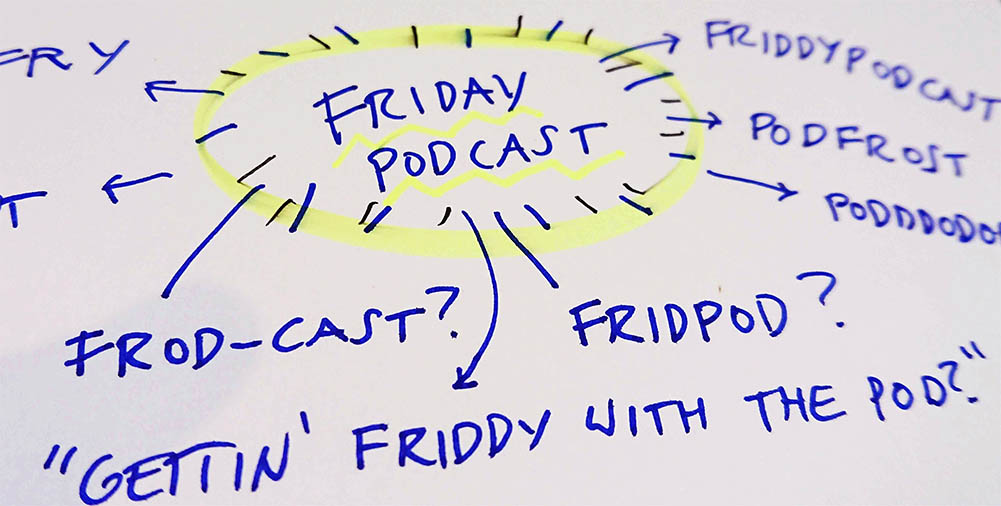