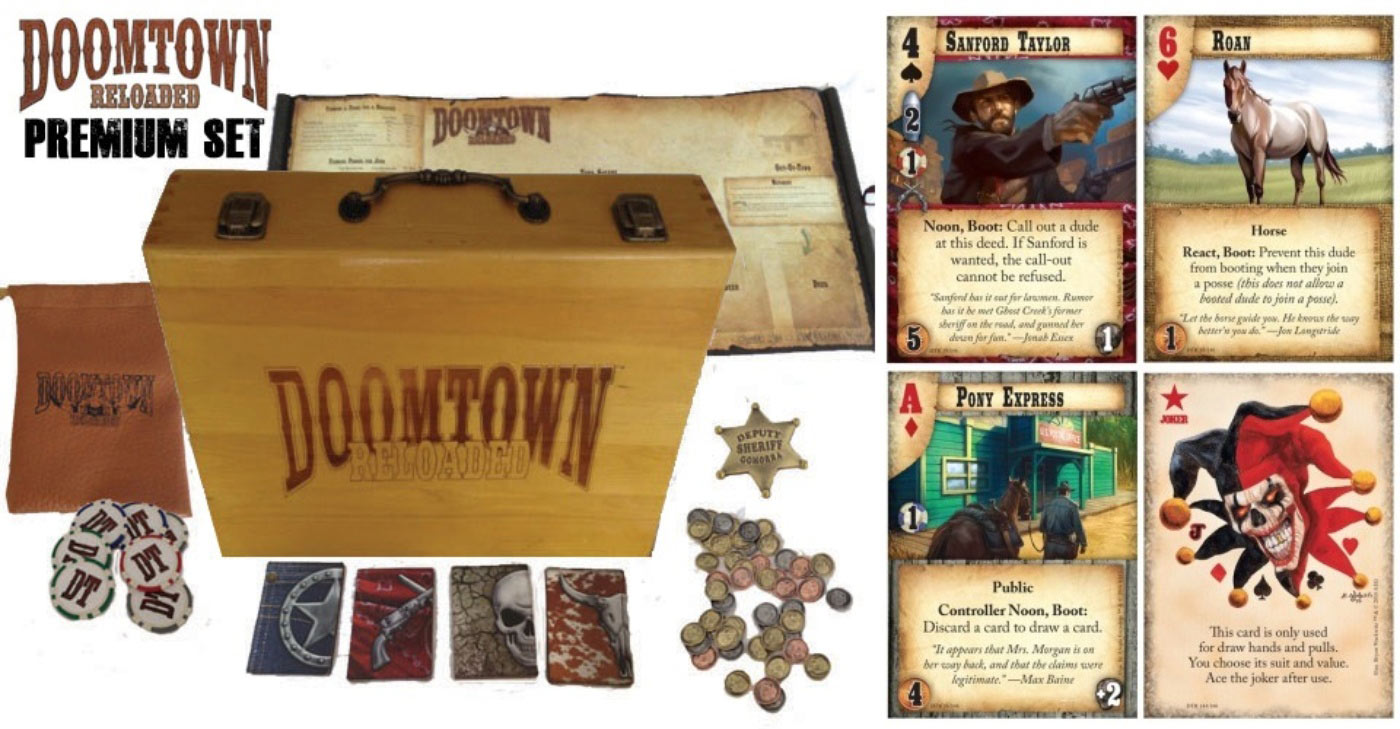 I never played Doomtown, but I did once run a campaign of Deadlands, the roleplaying game on which it’s based. It had a gorgeous rule system that used poker chips and an ordinary 54 card deck. Paul’s character once jumped through a window and got a bit of glass right in his nipple. You can’t make this stuff up. 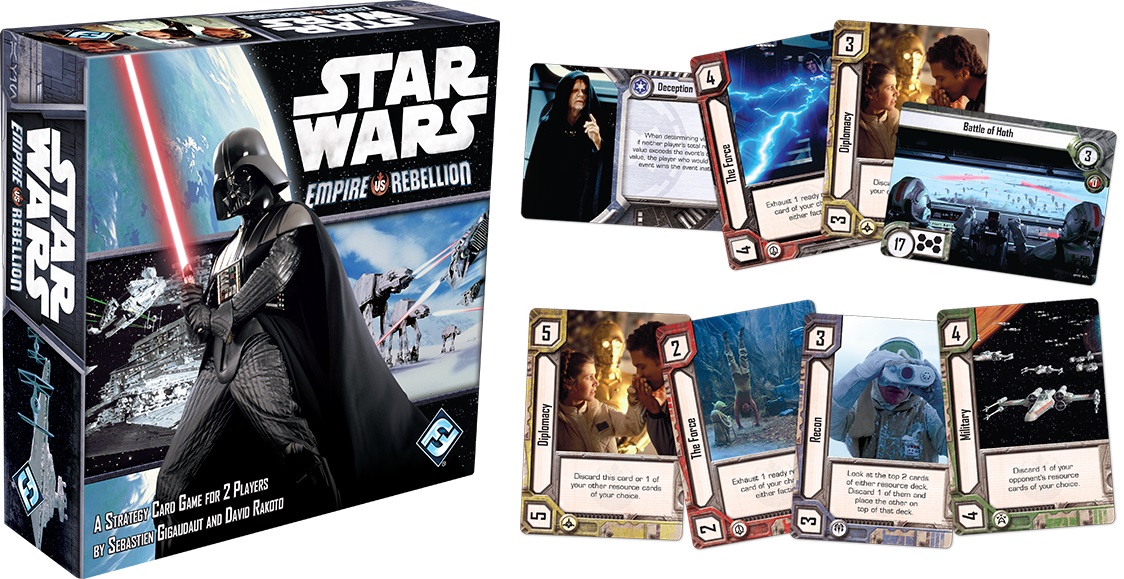 In other card game news, Fantasy Flight are continuing to wring every last midi-chlorian from the Star Wars license with the announcement of Star Wars: Empire Vs. Rebellion! A standalone, fairly accessible new design featuring actual stills from the actual real-life films of actors pretending they’re in an imaginary galaxy. A bit like how Fantasy Flight also started selling a simpler variant of their Game of Thrones Living Card Game illustrated by stills of the HBO TV series.

Empire Vs. Rebellion sounds fairly interesting. Each turn an event card is revealed that the Rebel and Empire players are fighting over, and players have to try and play “support” cards into that event, bringing your side as close as possible to the value of the objective without going over, like…. blackjack.

…OK. I’ve just read the description of this thing twice over while saying “Hang on” into my coffee every few seconds. This sounds identical to CIA Vs. KGB, which Fantasy Flight bought the rights to a few years ago. This is just a re-skin of another game they sell! You’d think that’s the kind of thing that would either be in this announcement or the game’s own page, no?!

Hang on a second. Fantasy Flight are running away to a small moon over there.

You’re right, Obi-Wan! It’s an enormous cheek! Because this is a very cheeky thing to do. Do you see. 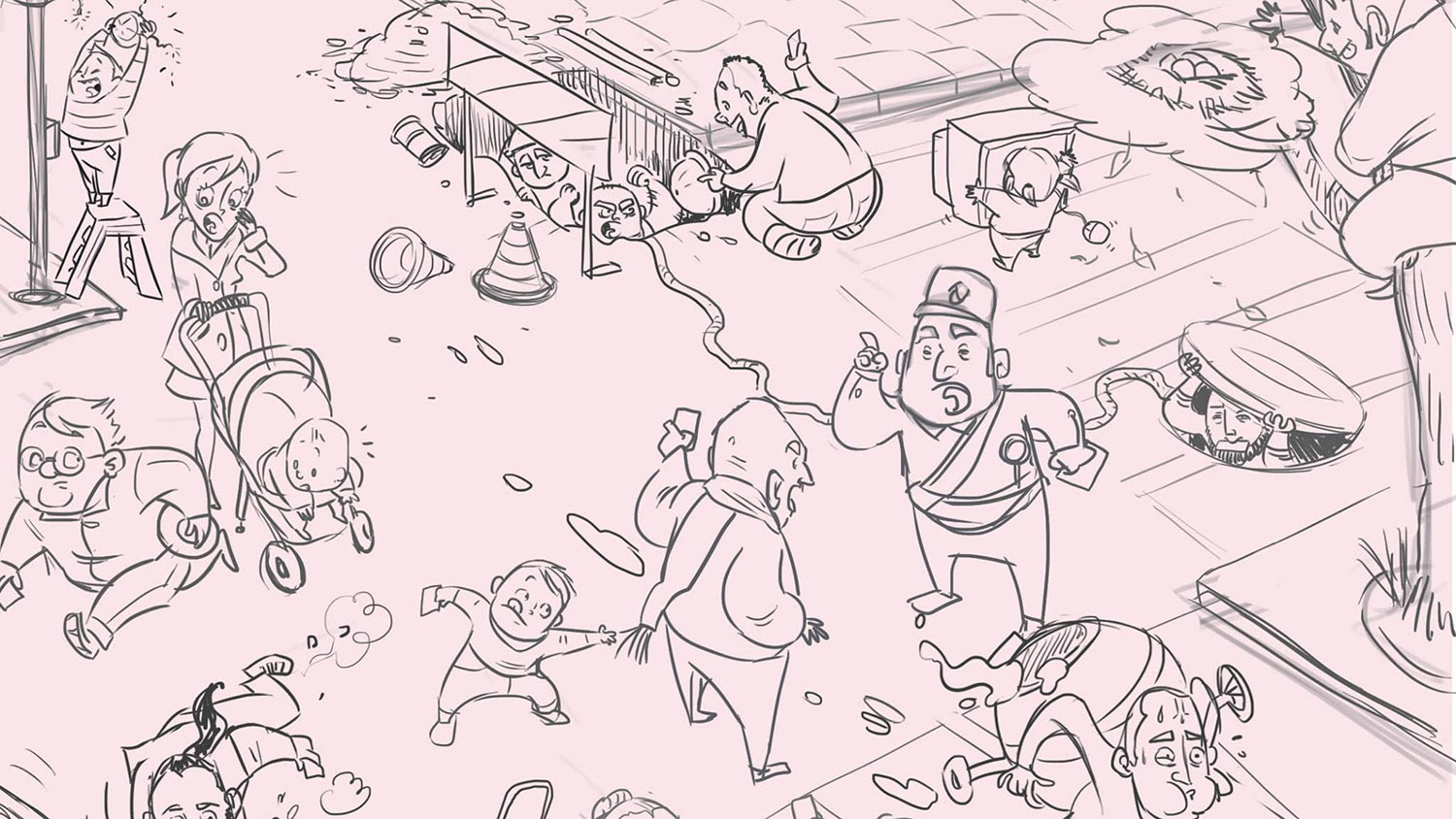 Players simultaneously roll a die, then might have to roll again, or take a card, swap a card, and so on. But these cards all have tasks and challenges that take place around the house.

There aren’t even any examples yet, but my optimism gland is already a-flowing. Imagine it! You run into the bathroom to find a toothbrush and see two players balancing on one leg. Or even something simpler- you all roll your dice, everything’s very calm, and suddenly one player runs off, swearing, to find a spoon. 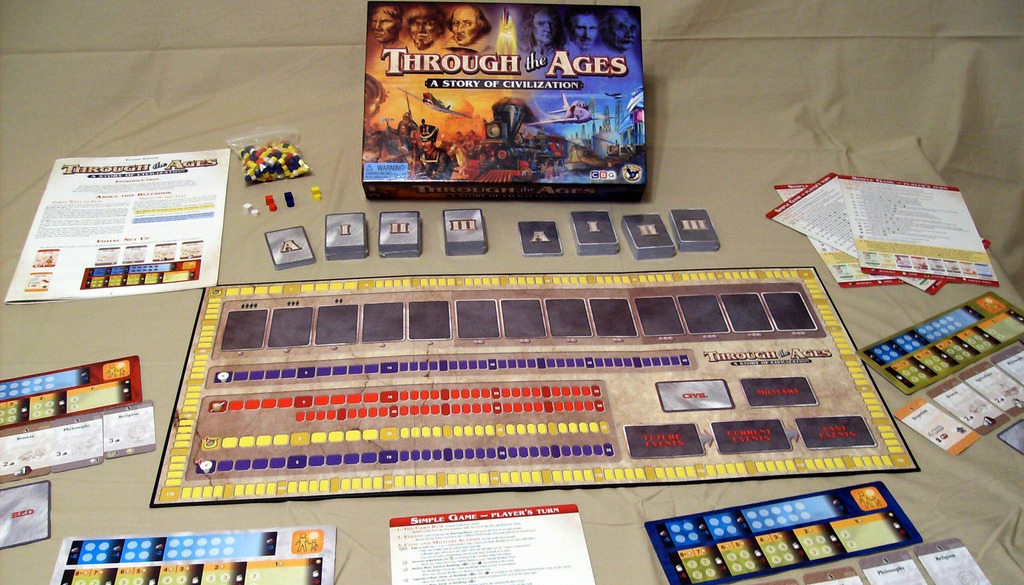 And now we approach Kickstarter Korner! I don’t mean that literally. Kickstarter Korner is only evocative nomenclature and as such the technology required to “approach” it does not exist. And I should know! We got *?~% half-way towards approaching the corner using microwaves and now whenever you type his name you get a unicode error.

Venerable 2006 board game Through The Ages returns as our first Kickstarter, with Eagle Games using Kickstarter to fund a reprint. This one shot past its goal in just a few days, and that’s no surprise. Through the Ages is both the “All-Time #1 Ranked multi-player (3+ players) board game on Board Game Geek” and the most famous game from our favourite designer, Vlaada Chvátil, that we’ve yet to play.

…Perhaps unsurprisingly. Let’s not mince words. Let’s take our words out, whole and wet with spit, and pop them onto the internet with a slapping sound. This game is ugly. And it’s long. And I can tell you from Paul and my experience playing Dominant Species that no amount of critical acclaim will repair the inescapable sadness that comes from staring at crap components for that long. That’s like going on a date with a stretch of peeling wallpaper. And having to pay the bill. Except paying the bill is annoying because the peeling wallpaper orders some expensive food. Though the wallpaper is still kinda fun to talk to? Let’s stop this analogy 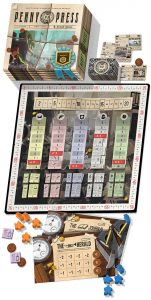 Penny Press is a much more appealing proposition. The joint-winner of the Cards Against Humanity people’s Tabletop Deathmatch YouTube reality show thingie (together with the excellently-named Discount Salmon), Penny Press pitches players as 19th century tabloid newspaper editors. It’s up to you to physically assemble each day’s front page, dispatch reporters, sell adverts and manage your circulation.

It’s a great idea, it looks gorgeous, the Kickstarter has a link to the full manual, and the box looks like a tied-up stack of papers! Yes, yes, yes, yes. Still might be crap! But if you’re going to take a punt on a Kickstarter, I like those odds.

AND FINALLY! Do you own Ghost Stories, Mascarade or City of Horror? I hope so. They’re all fantastic games, as pretty as they are innovative.

It’s only that publishers Repos Productions have now made promos for each one available for sale, including new Mascarade roles, a suite of new ghosts and a new village tile for Ghost Stories, and even a half dozen new action cards for City of Horror. At just one or two euros for each, that makes them better value than most expansion boxes.

Anything else? Oh, yes. 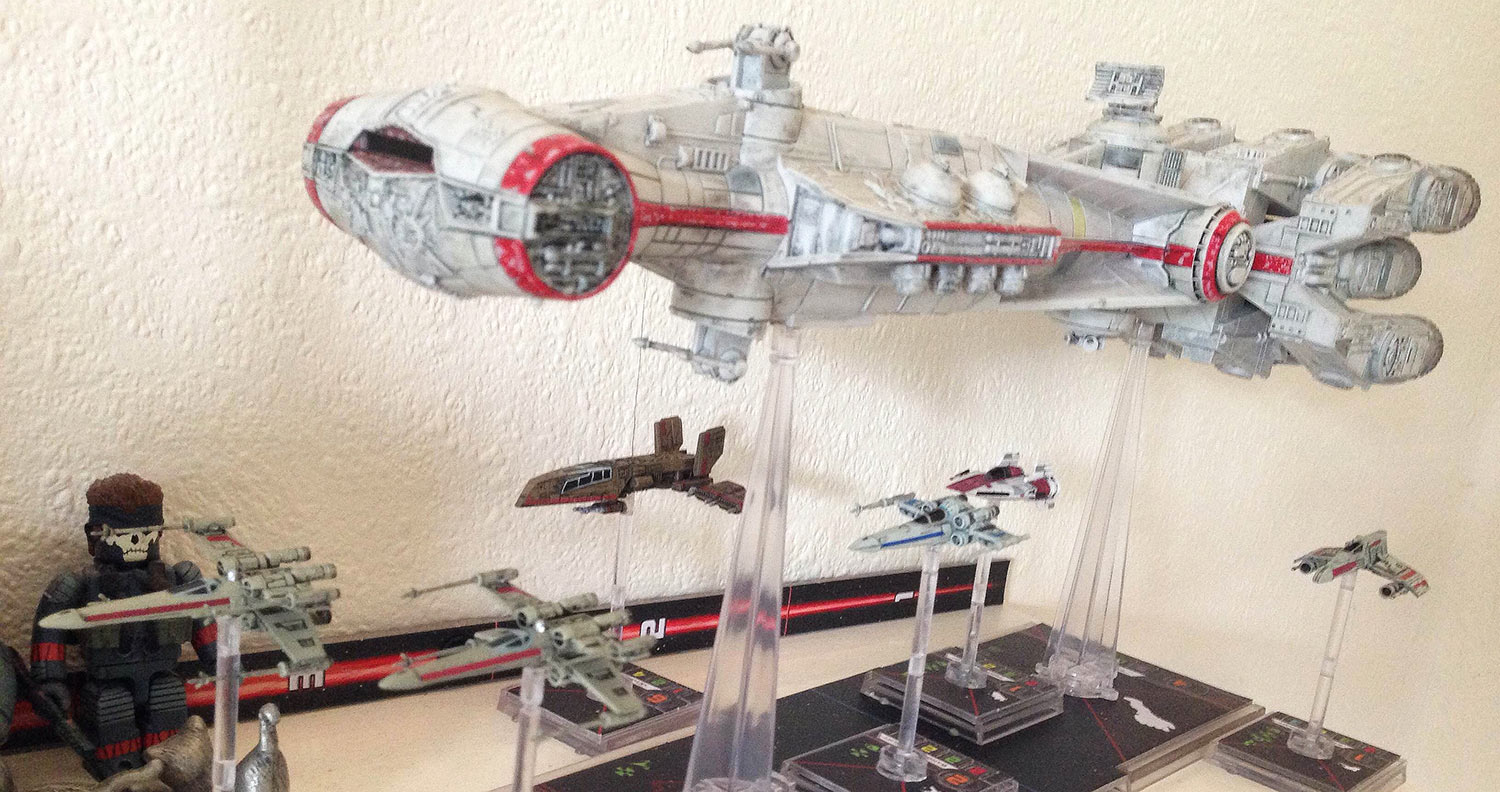 I may have a new obsession. Video review coming very, very soon. 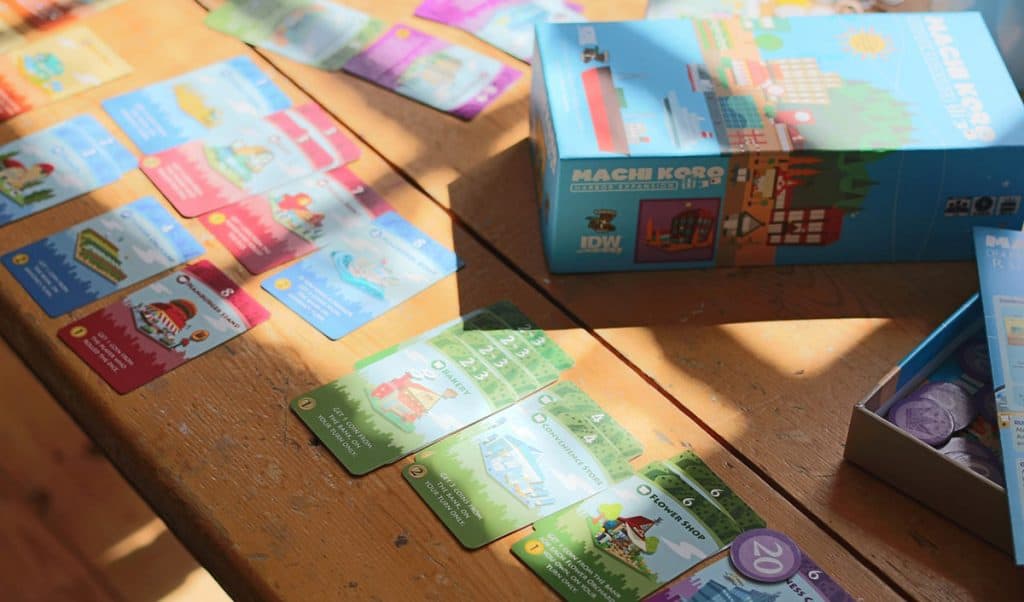 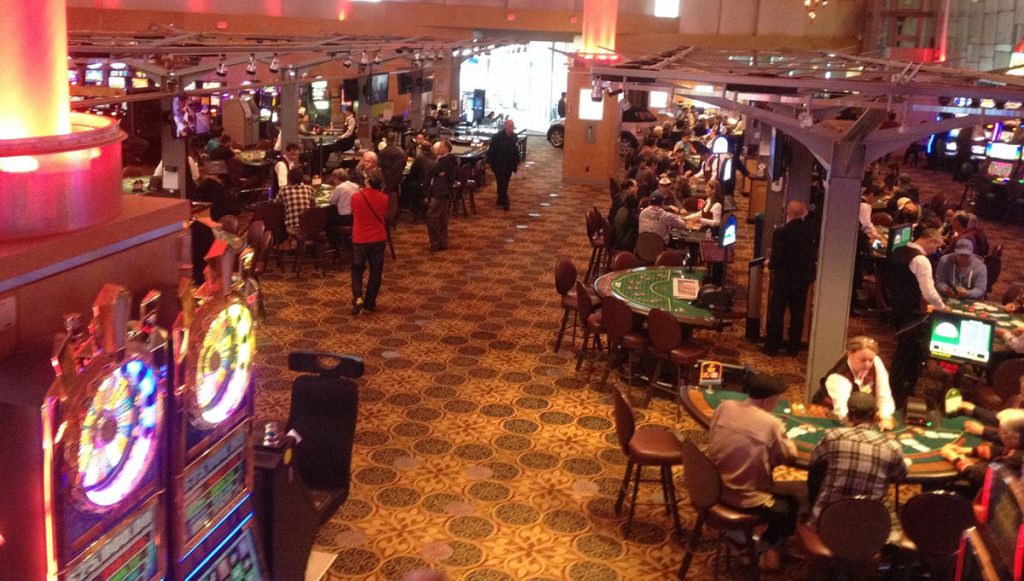 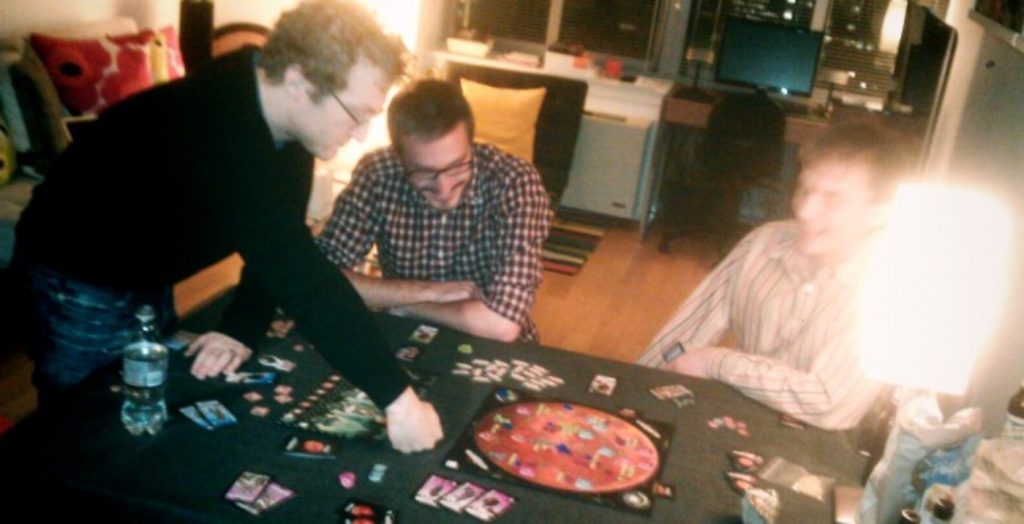