Paul: Games News is storm front that rolls forever toward us, each new band of rain drenching us with fresh updates and moist headlines. It’s all we can do to stay afloat amongst this unrelenting deluge, so perhaps we should welcome the watertight safety of UBOOT.

So let’s dive in! Secure that hatch and join me taking a look at one of the year’s most fascinating announcements… 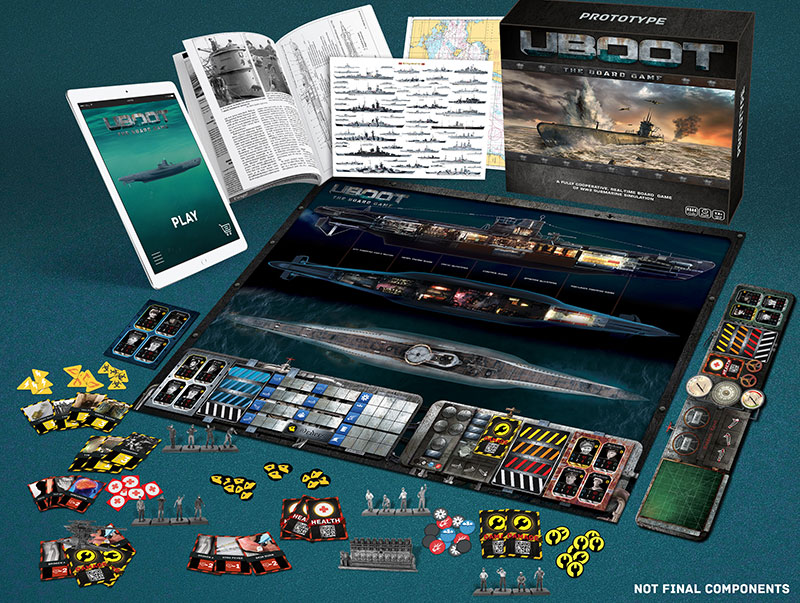 If you’ve ever wanted to drag your friends below the waves and then exhaust them by playing a stressful game of cat-and-mouse with the Royal Navy (and who hasn’t?), this could be just what you’ve been waiting for. UBOOT is a co-operative game of submarine command, where you and up to three other players take roles such as captain, navigator and engineer. You’ll be rotating shifts of injured and war-weary crew members, chasing convoys and frantically fixing your fragile vessel.

Among so many other titles on show at Spiel ‘17, UBOOT didn’t seem to get all that much coverage, perhaps because it’s not likely to see release for another year, but oh my goodness, this is an extraordinarily ambitious debut from new designers Bartosz Pluta and Artur Salwarowski. It’s complimented by an app, which handles some of the game’s AI and hidden information (including, it seems the periscope), and is going to hunt cash via crowdfunding soon. There’s no guarantee yet, but the designers are seeing if they can fit the full Spiel 3D sub model in the box and I have to say that I’m thrilled by the idea of watching my crew scuttle about this prop as if it were undersea ant farm. Since first stumbling across it last week, UBOOT has shot to the top of my “must try” list. 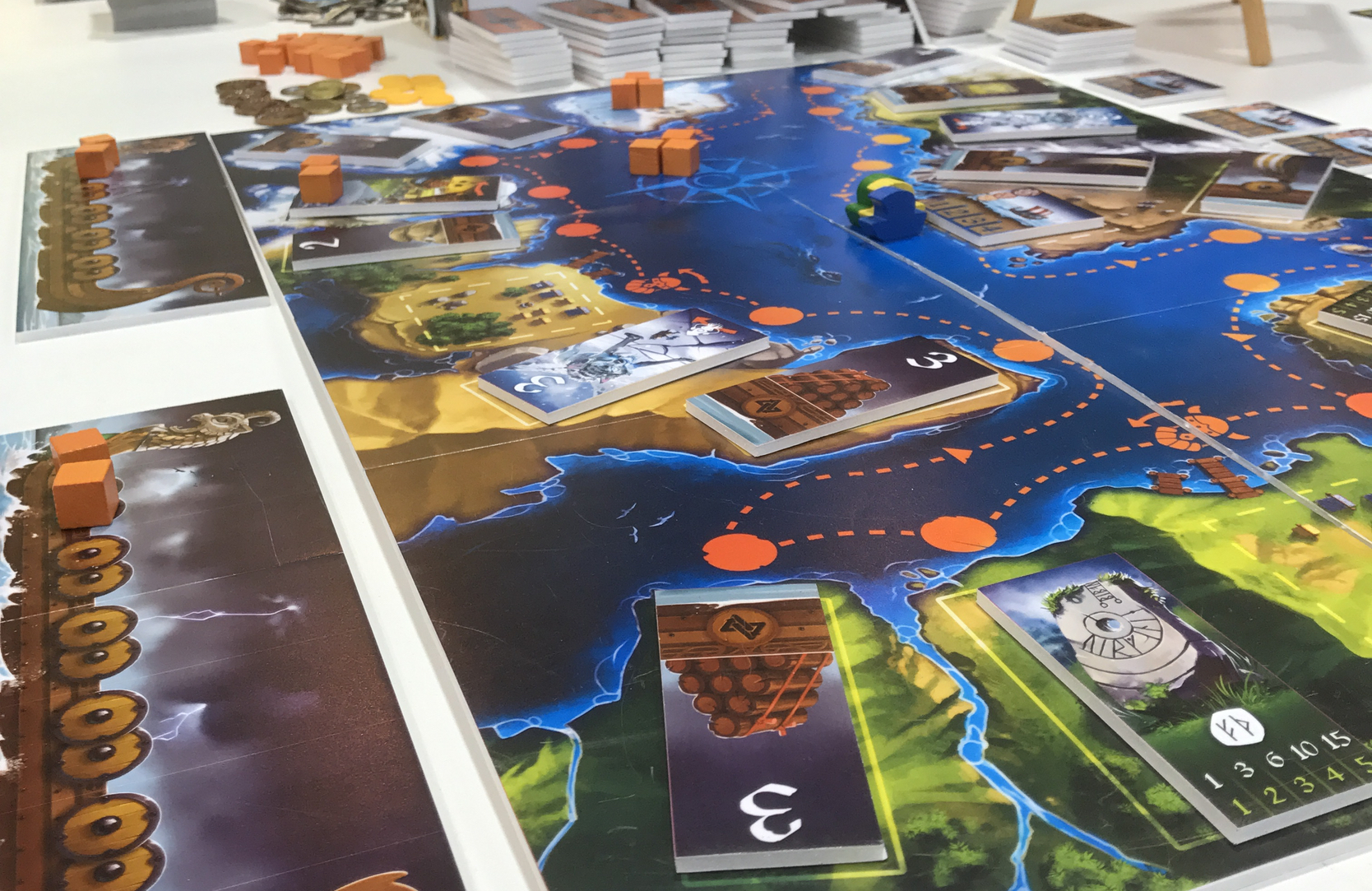 Also catching my eye this week is Raids (special credit to BoardGameGeek for the photo, as they’ve got images of the game before its own publisher!). It’s an ostensibly straightforward game of viking violence, with players sailing their Scandinavian ships around an archipelago, collecting loot and weapons as they go. They can either snatch items from empty spot or meet and do battle, engaging in a costly one-upmanship with one another and spending increasing numbers of warriors until one side backs down.

Mechanically, it sounds very simple, but with everyone competing to collect sets of items and choosing their fights very carefully, Raids sounds like a game that could get extremely tight. Probably the most important lesson that games have taught me over the years is how you don’t need complex mechanics to force players to make gut-twistingly tough decisions. Over and over. 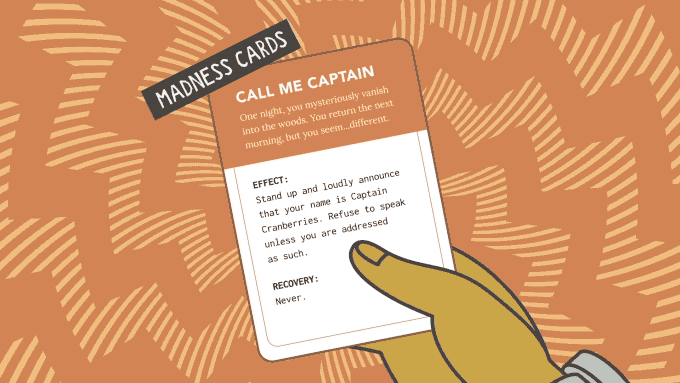 Over on Kickstarter, there’s a trio of projects trampolining for our attention, each one larger than the last. The first is the semi-cooperative survival card game Ravine, which has players foraging for food and supplies after a plane crash in the wilderness. As well as trying to find things to eat, everyone is also trying to avoid being eaten, as well as not going mad. The result of the latter has you taking a madness card and acting out whatever’s on that. 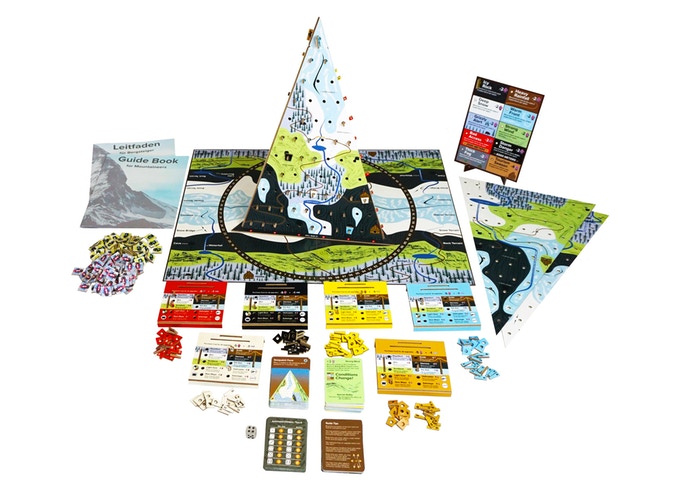 Next up is Mountaineers, the challenge of mountain climbing with an actual 3D mountain you assemble (ooo, I’m enjoying 3D things this week), which can be reconfigured each time you play. However, your challenge isn’t simply to get to the top, but to take particular climbing routes, crossing mountain faces or reaching specific landmarks. You’ll have to manage your supplies, deal with changing weather conditions and watch out for nature’s friendliest animal, the bear.

Finally, I couldn’t possible go without mentioning The Enigma Box, a curious chest of riddles and puzzles that almost reminds me of those conundrumy (is that a word?) app games like The Room. The Enigma box is a huge (and expensive) collection of props, tools, maps and booklets that combine together to make what it claims is a mystery-cum-adventure like no other. That’s probably true, as The Enigma Box is certainly a unique and very artisanal experience, but £152 is a lot to pay for something that it’s difficult to judge the quality of from here.

Are these challenges hard? Are they smart? What’s the ratio of props to puzzles? Is everybody going to get stuck on the sem bit because the directions were just slightly too vague? I’m curious, but I’m cautious.

“Meanwhile, in Bristol,” is not something I often find myself typing, but I’d like to point you toward the West Country and to City of Games, a forthcoming convention organised by Frank West and Sara Jorge. City of Games is happening whether it gains crowdfunding support or not, but the extra cash from its Kickstarter campaign will go to broadening the convention and there’s already an impressive selection of events in the works. As well as a megagame, local escape rooms are participating and there’s a board game jam for anyone who wants to exercise their design skills.

It’s all taking place between the 9th and the 11th of February (just in time for my birthday!), so you still have time to plan your travel. Bristol is, for my money, one of England’s best cities, and let’s not forget that it was the location of the first modern bungee jump. Now that’s culture.

Just before I climb into my exfoliating chamber, you might like to know I was recently interviewed by the charming gentlemen of Boards Alive, who asked about what it was like for us to put together SHUX and whose rapid-fire questions I subverted in my typically rambling, ragged way. My huge thanks to Aaron and Quinten for being such lovely hosts.

I’ve been interviewed three times about SHUX in the last couple of weeks and only now do I realise I’ve grown into that sort of warbling old man who you should never start a conversation with at a bus stop. This is the first of those interviews to go live and I’ll try and remember to link to others when they’re available. I have to admit that, as well a living a life of endless segues, I’m terrible for remembering to link to Other Things I do here. I’m an interesting person, though, and well-rounded. I promise.

And don’t forget to say hello to Matt and Quinns at PAX Unplugged later this week! Sadly, life events mean I can’t make it, something that’s a bit of a downer as I always like conventions and travelling somewhere new, but I hope to be back on the road again next year. If you make it out to Philadelphia, why not share with us some of your finest photos of this historic city?