Quinns: Hello everybody! So glad you could meet me here, at the Games News pub. It’s my round! Who’s for a pint of news? [points at you] News and soda, was it?

It’s happy hour, so we’re going to start out with a double news on the rocks. The nonsense-mongers at Hasbro have just unveiled two new games. Speak Out: Kids vs Parents is a familial evolution of their game Speak Out, both of which feature your team trying to work out what the hell you’re saying while you wear a dentist’s cheek retractor.

Doesn’t that sound like a game we’d make up as part of a skit? I can only approve that Hasbro has made it a reality.

The press image for it (above) is freaking me out, though. The combination of Habro’s clean-cut toy photography (which has always looked a little “uncanny valley” to me) with rictus grins is absolutely terrifying. Imagine coming downstairs and finding them in your living room. “WOULD YOU LIKE TO PLAY A GAME,” bleats the mother, spraying spit across the room. 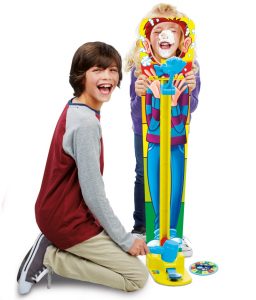 This is the other game that Hasbro will be releasing soon. You’re looking at Pie Face: Sky High, an extension of the Pie Face brand which made an inexplicable return last year.

I am not 100% sure why I’m putting this in the games news, but let’s stay the course. The difference this time is that instead of cranking the handle yourself and maybe getting hit with a pie, one of your “friends” hammers the base of the toy a certain number of times and maybe you get hit with a pie.

Which seems… less funny to me? For me the joy inherent in the grand old game of Pie Face was self-inflicted pie strikes. But I can also imagine awful children wanting to be the initiator of this creamy incident.

LET’S MOVE ON TO SOME PROPER GAMES oh my god

Did you guys know that @CMONGames is reprinting Knizia's Impossible to Find Modern Art!? I'm so excited! I love this classic game!!!! pic.twitter.com/ohPCkFgako

My week was thoroughly improved by the above Tweet. Reiner Knizia’s Modern Art is a classic card game that I’ve always wanted to play, and it looks like a shiny new edition will soon be upon us!

Like this site’s favourite Knizia games (Ra and Samurai), the concept couldn’t be simpler. Players are all art brokers trying to make the most cash. On each turn you choose a painting from your hand of cards and put it up for auction among your friends, and they might bicker over it or perhaps leave you to buy it yourself. The twist, however, is that this art is inherently worthless, but artists become more valuable with each painting of theirs that gets sold.

So it’s at once a supremely tricky auction game (what do you sell? what do you buy? how much is it worth?!) and a statement on modern art. What a wonderfully different, classy theme for a game. 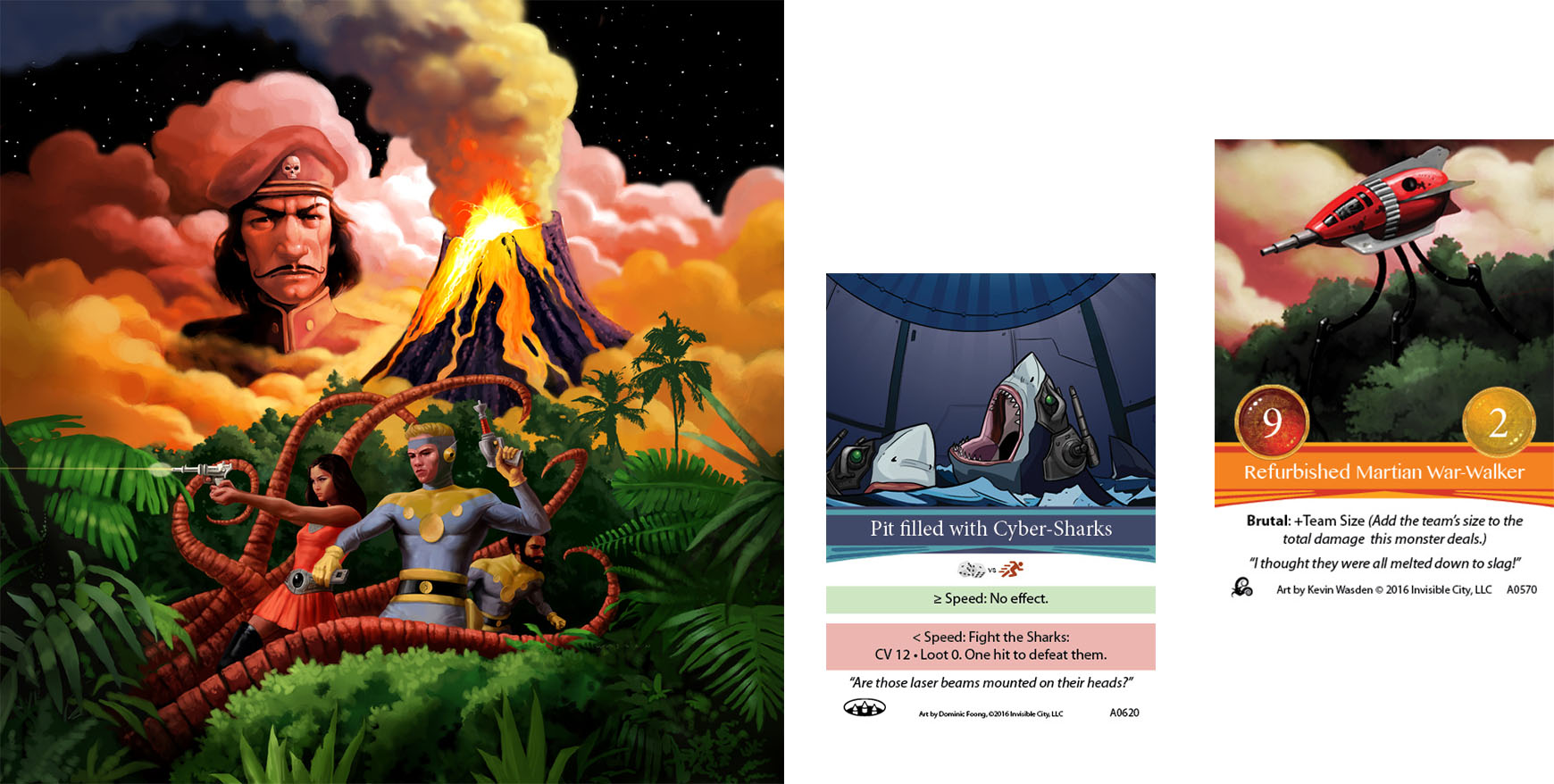 In further news of cool reprints, a second edition of The Isle of Doctor Necreaux is on its way!

The proud winner of “The Shut Up & Sit Down Review That Everyone’s The Most Likely to Forget We Did”, we reviewed this pulp co-operative card game at the 17 minute mark of this old episode. It’s possibly worth watching for our insane ambition- it’s a review filmed in one take with us climbing a 200 step staircase out of one of London’s deepest tube stations. Spare a thought for our cameraman Dom, who had to walk backwards up the stairs while trying to keep us in frame. And we filmed this twice.

Moving onto Cool Collectible Card Game News (CCCGN), a lot of you might remember that Paul was a pretty big fan of Ashes: Rise of the Phoenixborn.

Plaid Hat Games has released four expansion decks since then (including the superbly-named “The Duchess of Deception” and “The Roaring Rose”), but now they’re bringing out the big guns. The next two expansions are the above enormous boxes titled The Laws of Lions and The Song of Soaksend, each introducing a wad of new cards and ten new dice to the game, and they’ll each function as a groovy little deck box.

But wait! There’s more! Plaid Hat has teased still more expansions at the end of this news post: The Masters of Gravity and The Path of Assassins.

“Gravity” sounds about right. This many beautiful expansions being announced at once attracts me towards Ashes with unknowable, magical force.

In further news of Cool Collectible Card Games returning from the grave, Doomtown Reloaded (which I quite liked!) was discontinued by Alderac last Summer, but now it’s BACK FROM THE DEAD! Which is to say, it will be back from the dead (again) at some point in the near future (probably).

It’s all thanks to the newly-founded Pine Box Entertainment, which has arisen from the game’s community and will be posting more news shortly.

If anyone reading this felt like picking up a collectible, competitive card game with their friends I’d probably steer them closer to Ashes than to Doomtown at this point (the buy-in cost of Netrunner has become pretty insane, I personally think they should be cycling old expansions out a little more aggressively), but it’s a fun choice to get to make. When SU&SD started there wasn’t a collectable card game that we could recommend. Now there are three! Four if you include the co-operative Arkham Living Card Game.

Fantasy Flight release so many expansions that we only cover them in the Games News when they come as a surprise. First off is The Wars to Come expansion for The Iron Throne, which is their re-imagining of Cosmic Encounter in the Game of Thrones universe. The box will add House Greyjoy and House Martell to the proceedings, and bump up the 3-5 player count to 3-6.

For anyone waiting for the SU&SD review, though, let me just state that we probably won’t be doing one. SU&SD represents an increasingly careful curation of the very best new designs in the industry, so even though The Iron Throne looks fairly different from Cosmic Encounter, it’s unlikely to knock a totally new design off of our review schedule. 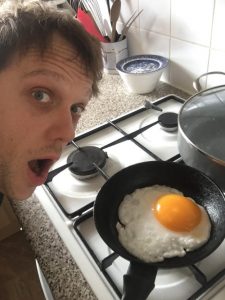 In Quinns news, our top story is that this morning I cooked a goose egg and it was MASSIVE. You can click on that image to enlarge it. It had the yolk of approximately four ordinary eggs and that felt like too much yolk but after I ate it I had an unbelievable surge of energy. Big thanks to the goose in question for helping to make this happen for me. 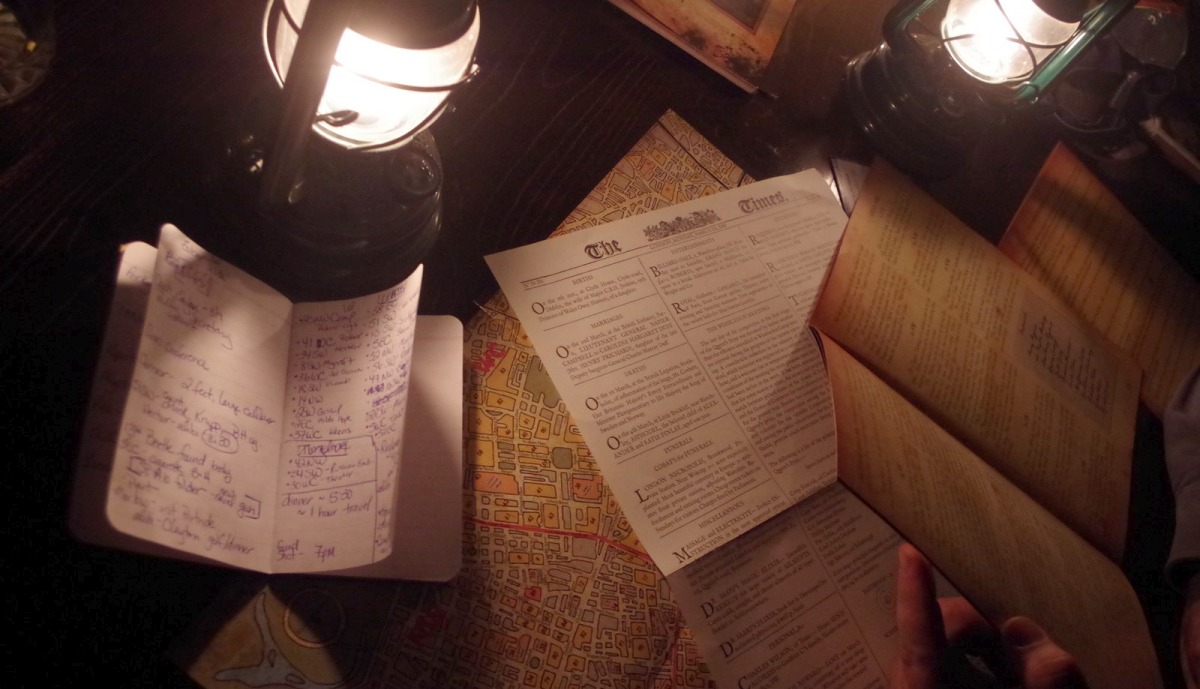 Thanks also goes to JoAnna Moskal for sending in the above image for our reader gallery! She writes:

Hello Shut Up and Sit Down!

I’ve really been enjoying the art and photos from the community. So much talent!

Attached is a photo from our first game of Sherlock Holmes Consulting Detective, which we played by lamplight. We solved the case and scored a whopping -55 points because we are apparently very cautious people (despite the close proximity of paper and fire, as shown below).

During the week of American Thanksgiving, we do an annual digital detox, and on the last day we celebrate Dark Friday when we also eschew electric lights. We’ve been doing this for so long that I can’t exactly explain why…some sort of very quiet protest against conspicuous consumption…and the vulgarity of electric lights? Mostly, it’s a lot of fun and we enjoy how small our world becomes when you can only see what is within range of an oil lamp’s glow.

Consulting Detective seemed like the most thematically appropriate game for the evening and we had a great/exhausting time for 2.5 hours playing the game and an additional half hour of fun debriefing and complaining about what a twat Holmes is. Four locations?? Four?

Thank you for the fantastic website and community. During the 20 minutes of detox cheating I did midweek, SU&SD was one of the first sites I gleefully visited.

Lovely stuff! If you have an image you’d like to feature in the Games News, email [email protected] with the subject “Gallery!” 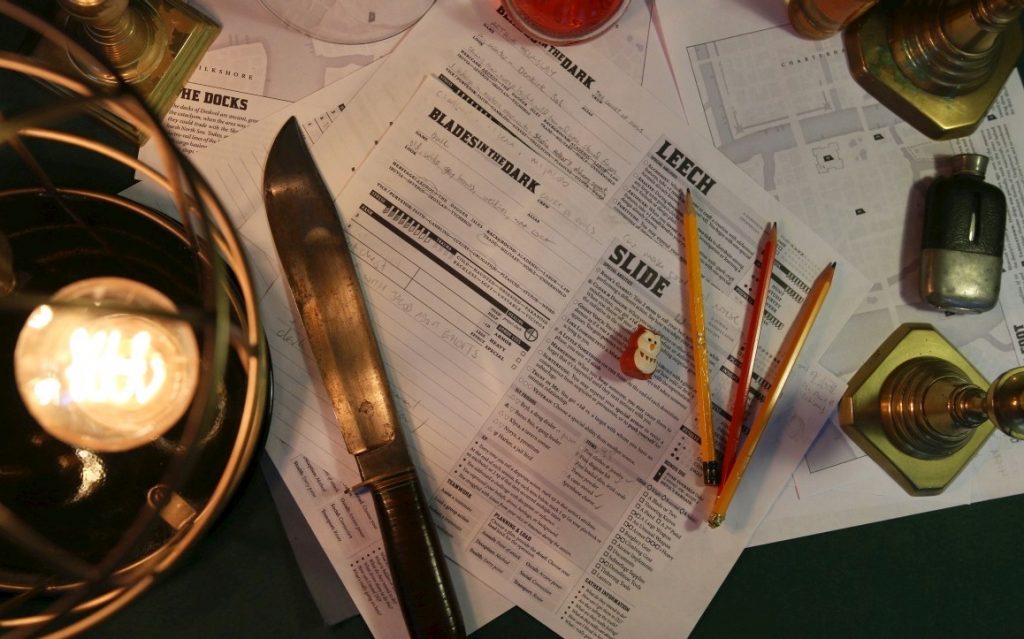