The problem I have is that every other game I want to talk about is a game I don’t have. More than a few of them are games that I did have, but don’t have any more. It’s a sad state of affairs that all I have left of HeroQuest is the board, the dice and so many fading memories.

Well, I have even less left of Space Crusade, Games Workshop’s science fiction counterpart to HeroQuest, released a year later. I barely remember the components, or even how to play the game. Today, looking through old photos, I’ve been trying to remember and trying to avoid that metaphorical whack in the sack.

Okay, I’m going to admit it. Straight up. Space Crusade was the poor man’s Space Hulk. It followed the same premise, though. In the dark future of the Warhammer 40,000 universe, one player controlled a horrific alien menace, while up to three others commanded a team of ridiculously over-bioengineered globs of vaguely fascist-looking Aryan muscle as they ran around a derelict space ship, solving each and every problem they encountered by firing extremely large guns.

It didn’t have the interlocking, customisable board sections of Space Hulk. Nor did it have an intelligent combat system that had you carefully rationing action points. It was also much less about careful placement of units and much more about raw firepower.

It did have a van-load of figures, though. A menagerie of alien terror. A right royal party of space death just waiting for you to turn up and bite into the slice of space cake it offered you. A cake whose flavour was death, whose topping was death and whose icing read Happy Deathday. That’s a lot of death at that party. 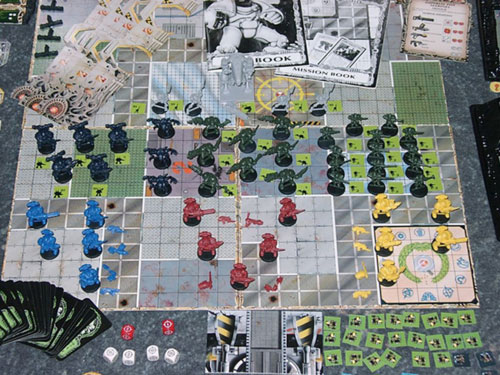 And, like Space Hulk, this game was still horrible to you. Let me explain.

The game pitted an alien commander against at least one squad of Space Marines. If you had up to three other friends playing, then one of them had to pick the girly yellow squad with the stupid name: The Imperial Fist Marines.

These Space Marine squads had to rush around an abandoned spacecraft to try and achieve a primary and a secondary objective. These were usually pretty simple, such as get somewhere on the board, or find and terminate a particular unit. Whichever squad achieved this received the points for it, as well as points for any other units they eliminated, but if the alien commander prevented this, that guy got your mission points instead. Whoever scored the highest tally from kills and objectives won the game. Simple.

At the start of a mission, the Marine players got to kit out their (fascist) Marines with various weapons and gear, but had to bear in mind that better equipped Marines were worth more points to the alien commander if they bit the dust. Similarly, the alien commander would want to keep his more powerful units alive, so it was wise to be careful when he threw them into combat, as he could end up giving points to another player. Fair ‘nuff.

Oh, and though all the Marines were ostensibly on the same side, there was nothing to stop them turning on each other in the pursuit of glory. They could. And might. 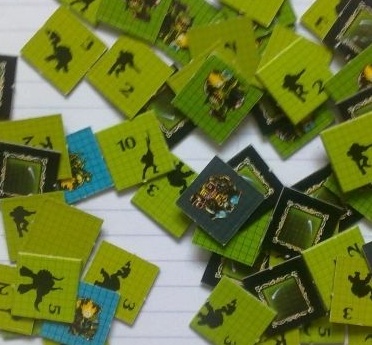 These blipped their way about the board, face down, until they moved into sight of a Marine, whereupon they were revealed. They could turn out to be anything from a false signal to a humdrum space ork to, well… one of these: 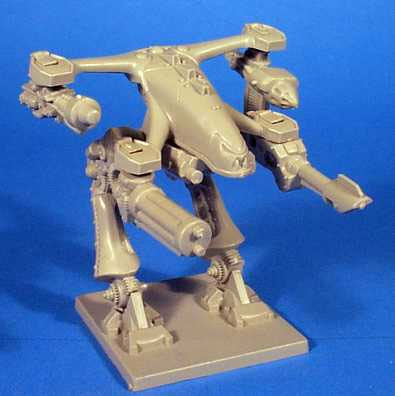 Shit son, you wish you’d stayed in your space bunk now, don’t you? Well, don’t worry, that guy was only from the expansion. I’ll get to that later.

The kind of things that shot up the board in Space Crusade were the standard space versions of Warhammer’s futuristic universe, including Chaos Marines, space orks and gretchin. I thought gretchin was a girl’s name, but it turns out it’s a really crappy alien sniper. It’s really crappy because it has to roll these standard Space Crusade dice: 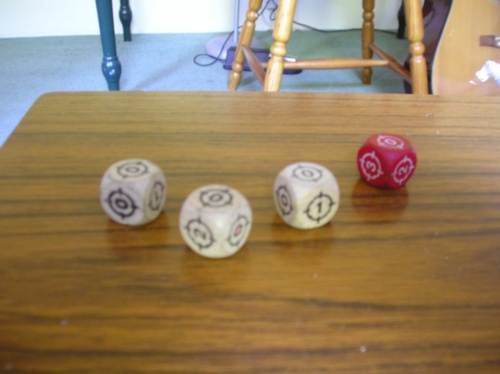 That photo took me ages to take and I STILL DIDN’T GET IT RIGHT.

But look, look at those dice! Did you ever see so many zeroes in your life? Space Crusade is not a game that wants you to roll high numbers! That red bugger on the right is a Heavy Weapons Die, and that goes all the way up to three. The other standard die have a one, a two and FOUR ZEROS on them. The numbers you roll are how much damage you do and if you roll only 0s, you’ve shot wide.

The typical, bog-standard weapon in Space Crusade fires TWO WHITE DICE and that’s all, including a Marine’s main firearm. YOU’RE GOING DOWN, SON.

This turned an awful lot of the combat into an ineffective chorus of massed, desperate gunfire and meant the board was often made soggy by cascades of desperate tears. Sure, you could always opt for hand-to-hand combat instead, but that inevitably left your units floundering and exposed, right next to angry and unimpressed opponents.

The thing is, for the most part Space Crusade was about just walking around and shooting things, not very much more. To spice the game up a bit more, there were various order cards or special equipment that both sides could employ, but it meant the game didn’t have as much depth as I’d first hoped. It was mostly shooting and stepping aside, shooting and stepping aside, like a deadly ballroom dance.

Launching into a campaign made things a bit more interesting. Not only were you tallying your points up at the end of each game to see who won, but winners achieved promotion to higher grades, grades that gave them more pre-mission options, with the eventual hope that you’d reach the highest possible rank and get to wear tassels in all sorts of places. Even if you didn’t win a game, you could still receive commendation badges which you could later trade in for promotion, or which also entitled you to a greater selection of exploding accessories. In the case of the Space Marines, it wasn’t “you” who was promoted, but your squad leader. As as he rose through the ranks he became ever more valuable to you, as well as becoming strangely more attractive to enemy fire. Lose him and it was back to square one (and time to start killing everyone else’s squad leaders, too).

Space Crusade, which (was also known as StarQuest in some countries) had two expansions. Mission: Dreadnoughtwas the exciting one, and the eponymous Dreadnoughts were these guys: 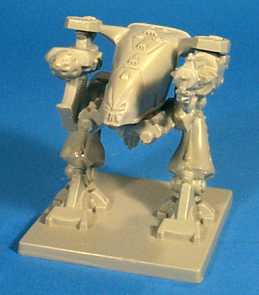 Nasty? Absolutely. They took several hits to kill and the more weapons they carried, the more obscenely imbalanced they became. Oh yeah, I should’ve mentioned that Space Crusade never felt as balanced to me as it should have. Just one Space Marine player against the alien commander would often get overwhelmed, while three teams of Marines were too much. The Dreadnought expansion was likely introduced to fix the latter, but it feels to me that it swung the balance too far back the other way. Right back into someone’s balls again.

I can’t speak for the Eldar Attack expansion, as I never saw it on sale, but I gather it allowed players to command a squad of the highly advance, ethereal space elves that were the Eldar. How advanced, you ask? So advanced that they used deadly shuriken catapults, weapons so dangerous that they rolled… TWO GODDAMN WHITE DICE.

Space Crusade. A game that likes it when you miss. 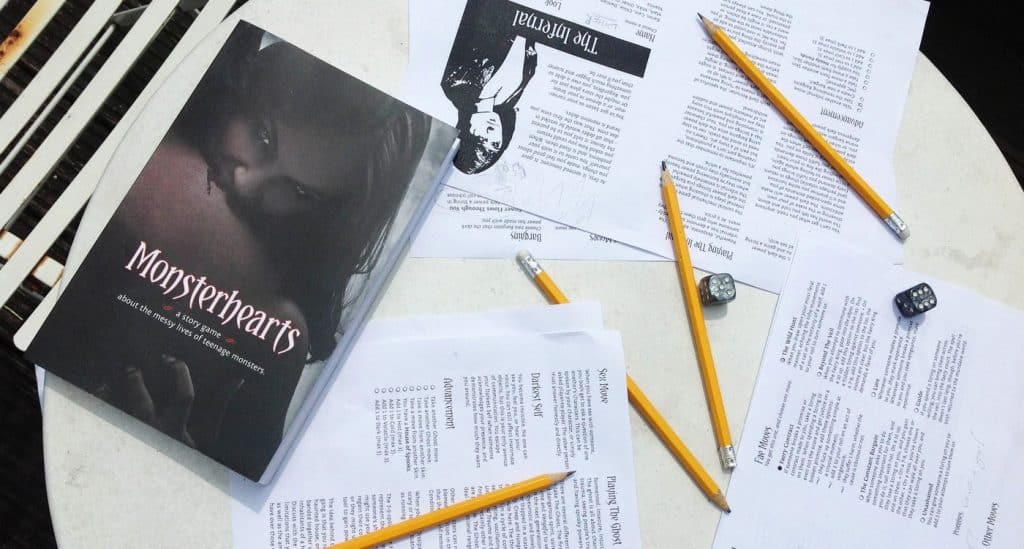