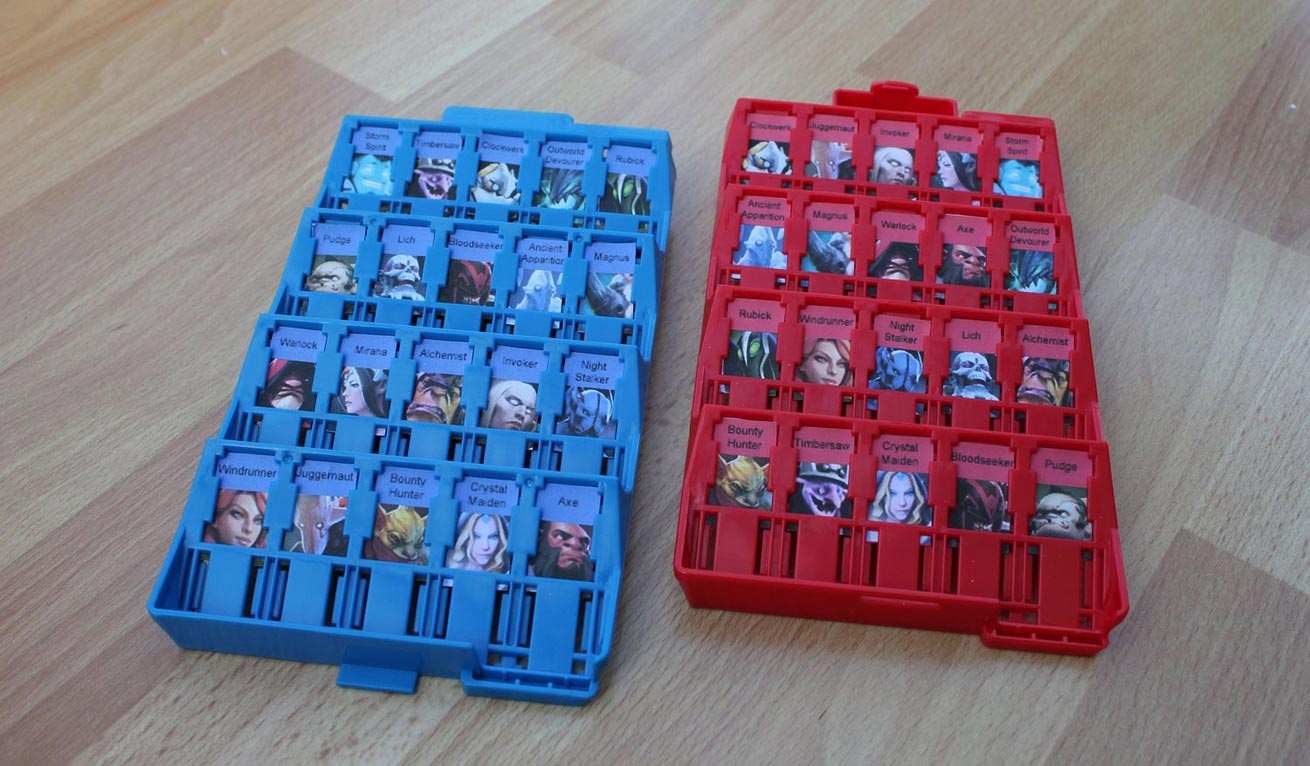 Pip: I hadn’t really thought of what I did to my copy of travel Guess Who as modding – it was just a fun project which saved me from a gift-giving conundrum. But Quinns thought other people might fancy doing something similar so he asked me to share the instructions. First, though, some backstory:

Sometimes there are people in your life who are impossible to buy presents for. These people are terrible jerks. They often have a single big main interest or hobby. “Hooray,” you think. “I will buy them a thing from this interest or hobby and all will be well. This is genius!”

Then you realise that actually they buy everything they value from that hobby the second it comes out and if they don’t own it it’s because it’s not worth having or is beyond the reach of a mortal wallet.

“Don’t worry,” they say magnanimously. “I’m sure I will love whatever you get me.”

These are the words of a terrible jerk.

Sometimes I take it as a challenge, usually played out through the medium either vindictive or aggressively sincere crafting. If memory serves that’s what led to a conversation with a now ex-boyfriend about how perhaps in the future if either of us felt like knitting the other person a pair of Christmas socks (which, according to the above magnanimity would have been loved REGARDLESS) we should mention this intention to the other person before getting three-quarters of a sock into the project and then asking them to try it on and see where the toes might need to be.

(I maintain that if you go around saying things like “I’m sure I will love whatever you get me” then your punishment will be having to smile through ineptly constructed festive socks.)

Baking is one option. I can bake the shit out of many types of biscuits, cakes and other things you can put in a box and have the other person be genuinely pleased to receive them. Weird homemade cards is another. I’ve made a card that was essentially a fishtank with moving fish, and one that was a fold-out silhouette of the Oxford city skyline. The most recent, though? A sort of homebrew Guess Who. 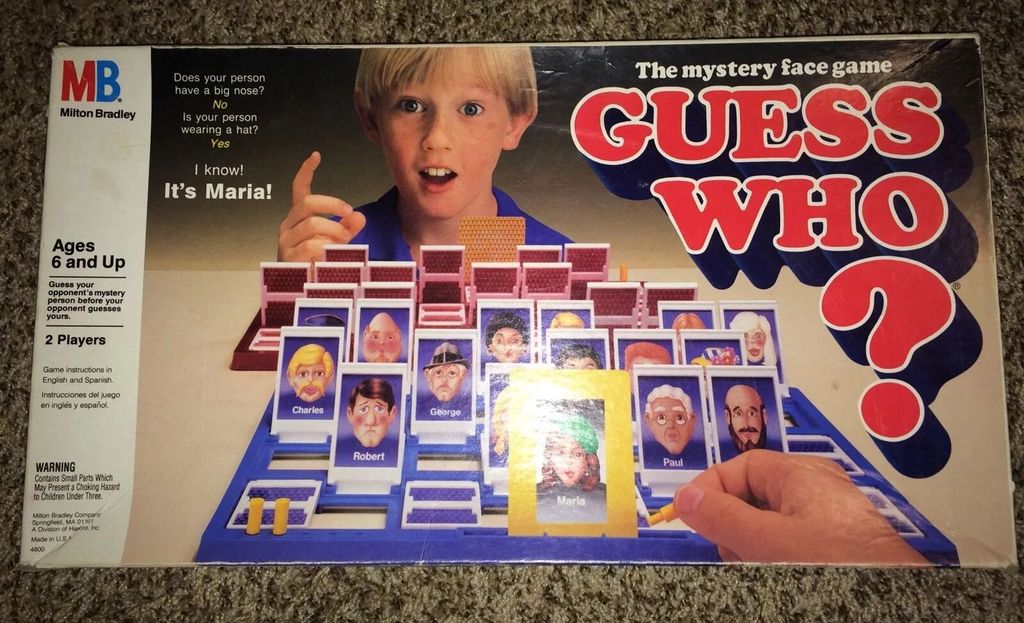 It’s something I actually did in a very basic form about 15 years back as a joke – I was struggling for a present for a friend so I got a Guess Who set, stuck some pictures representing our current literary interests over a couple of the characters and renamed it Hesse Camus. It was kind of an in-joke and a pun which, thinking about it now maybe explains how I ended up in games journalism.

This idea floated back into my mind last year as I scrabbled for a gift for my partner – someone whose fondness for Valve’s supermassive multiplayer videogame Dota 2 is well-known. I decided that instead of trying to compete with his collection of stuff I would create something unique – a copy of Guess Who with all the characters swapped out for heroes from that game

The end result is a bit scrappy and a truly great warning to anyone considering buying the cheapest printer on Argos’ list but it was also fun. Apart from the part where I nearly threw the whole thing out of the window.

So, first obstacle was obtaining a copy of Guess Who. I thought I’d get the travel version because I didn’t want my gift to be AN ENORMOUS BOX YOU MUST NOW STORE FOREVER. Travel Guess Who is kind of rubbish because you don’t get little plastic flippy bits for the characters. Instead you just have to slide the little cards down out of view. There’s a sadness where there should be a snappiness.

As a result, I guess my first piece of advice would be to use real Guess Who and not stupid travel Guess Who. 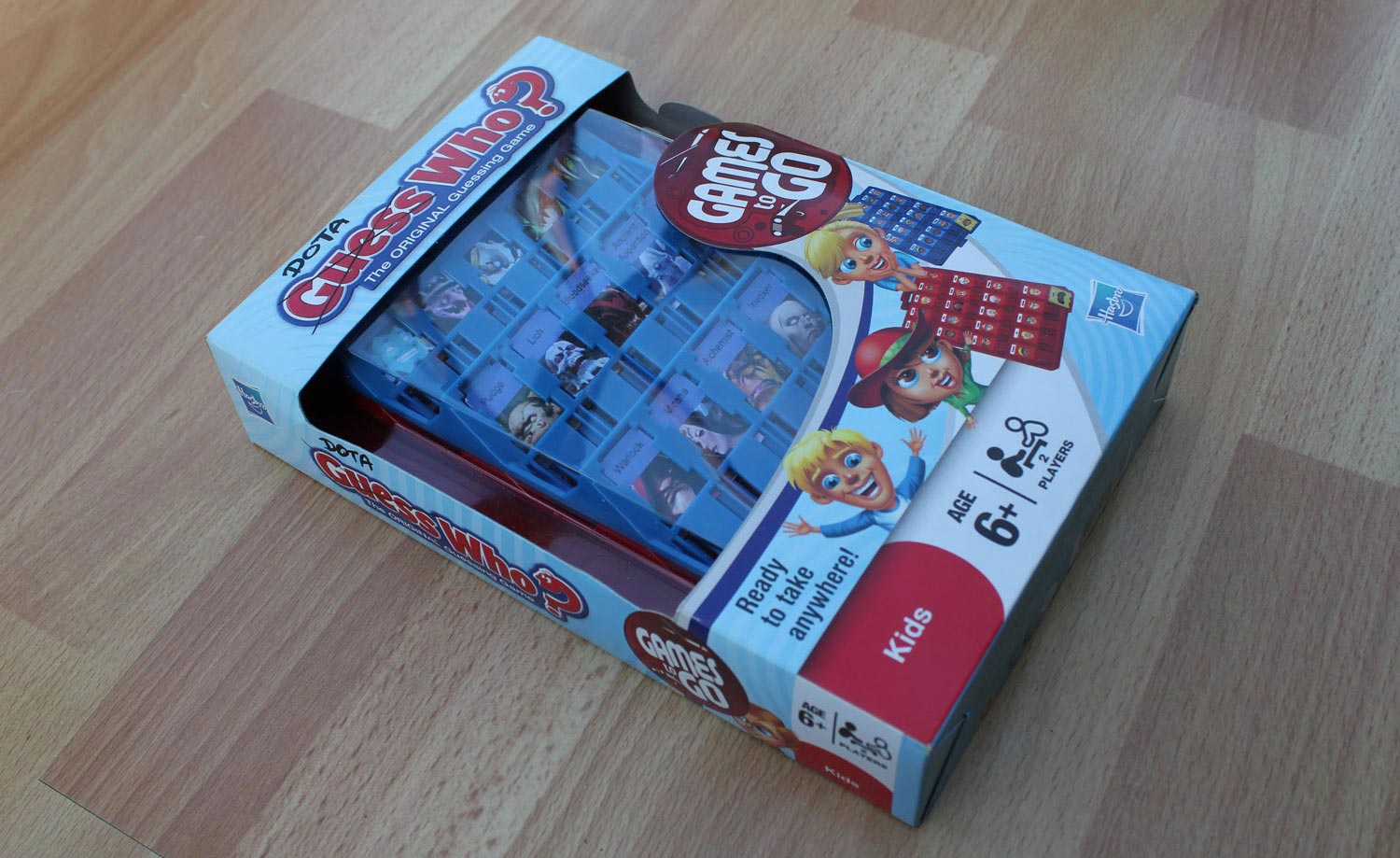 This non-flippiness also affect how you create the replacement inserts. Generally you’d measure the inserts, taking into account whether any bits of the design are obscured by the plastic board when they’re in place and then set up a Photoshop (or equivalent) template using those measurements so you can create the new characters.

For mine I created a blank document the size of an A4 sheet of paper and then did a bunch of layer masking. Layer masking is where you hide most of a layer, only leaving a certain amount visible – like making a letterbox you can peer through at part of the image. The benefit of layer masking over just cutting or cropping is that it lets you resize and reframe the image more easily because you’re not hitting “undo” all the time.

If you’re in Photoshop you can do that by creating a selection box the exact size you need (i.e. the dimensions of the Guess Who character card) then clicking on your blank image to position it, then click the New Layer Mask on the layers panel. You can do that a bunch of times, moving the selection box each time in order to end up with a lot of character cards on one page because that’s EFFICIENT.

In order to use the masks you take the image for the character you need (or object or whatever your theme is) and link it to a layer mask. To do that you just put the image one higher than the mask on the layer panel and hit CTRL+G which binds them together. After that it’s just a matter of twiddling til it looks right and repeating for all the other characters.

I like trying to make their faces the same size so they look consistent – mostly that means using an extra guideline or two (which you pull in from the rulers on the side) and aligning the chins and eyes to that. 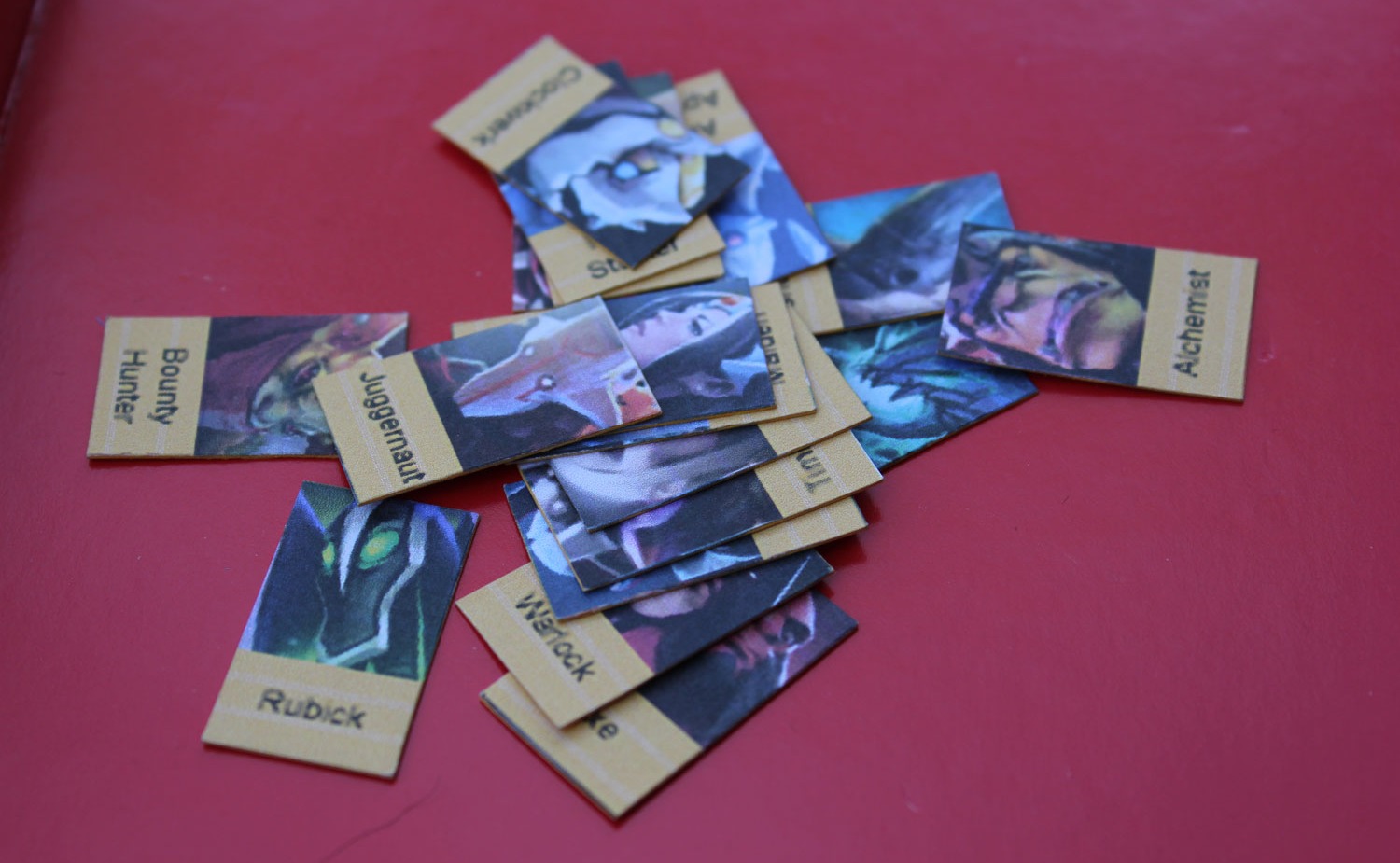 When all is well and you’re happy and no-one’s chin is falling out of shot and you’ve not accidentally doubled up on anyone you can press print. Only print one sheet because this is the point where you’ll probably realise something about your set of Guess Who. Maybe the side grips for the character cards obscure important bits of your characters or maybe you’ve done something weird with the measurements and been working in pixels instead of millimetres. Mine was that I hadn’t realised that a couple of millimetres at the bottom of the cards would be hidden from view so everything needed pulling upwards a bit.

When everything was printed out I had been going to mount the characters on thin card so they’d be a bit more durable. In the end I gave up on that idea because the only card I had made the characters too thick to comfortably slide up and down in their plastic grid so the edges started to get mangled real fast. I actually think travel Guess Who is designed to have double-sided character cards so that instead of pulling them all back up again you just flip the board and what you’d previously seen as a pushed down deck was a perky sea of faces again.

You could do that if you were so inclined by using double-sided tape or scrapbooking micro dots or similar to affix two character pictures to one another, the on on the back being upside down compared to the one on the front. I didn’t do that. Out loud I say it’s because I figured it was more likely that the corners would get messed up and the whole thing would look shabby really fast. In reality it has a lot to do with the fact that scrapbooking micro dots make me more angry than any other crafting medium. They’re a nightmare and a ruiner of fun, rivalled only by double-sided sticky foam pads. 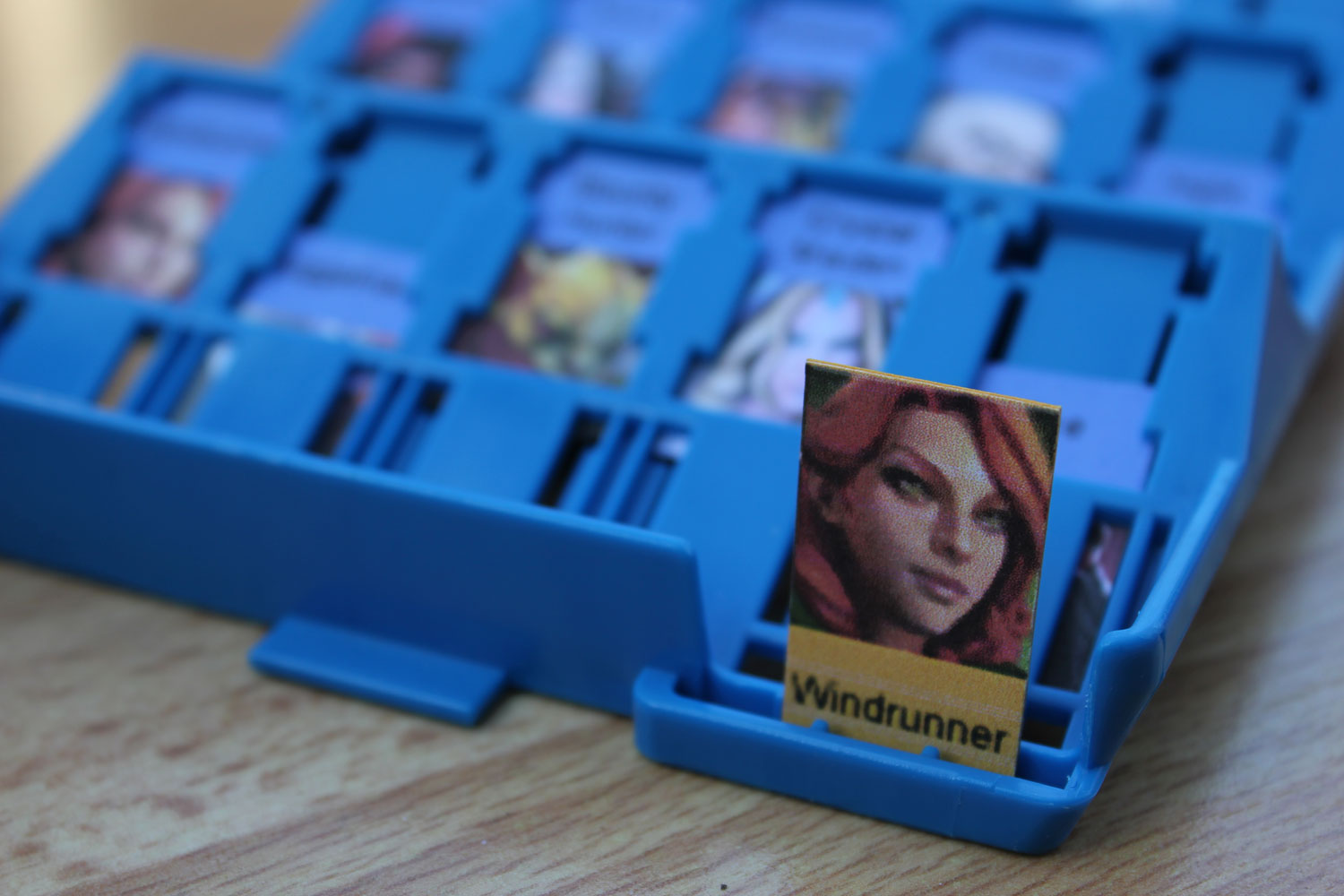 If you’re interested in how I picked the heroes, a stat-tracking service for Dota 2 called Dotabuff lists a person’s most-played heroes so I used that to select my Guess Who roster and make the characters more appropriate for that person. You could do whatever you wanted, though. Pictures of Brendan in different moods, different flavours of cat, stones which seemed pretty interesting… Look, I have no idea what people do for hobbies nowadays. That’s your problem.

Using your cards you’ll be populating the red and blue side character slots for each player. The only rule here is, I guess, not to make the layouts the same on each side. I don’t think it affects the game, exactly but (and I’m sorry for not mentioning it earlier) Guess Who is fundamentally a dreadful and boring game. Especially if you’re playing a version without the flippy plastic card slots. If you can read exactly what’s going on on your opponent’s side of the board that just makes it more tedious as you can tell how close they are to guessing your card.

When that’s all done and dusted you make the more of those card printouts. These are the ones you pick from at the start in order to assign the character your opponent will try to guess. If you want it so that you’ll never both be guessing the same person then print out one set of characters. If you want that extra level of spice print out two sets. Spice is a relative term here. I’m still trying to find ways to make a non-flippy Guess Who exciting.

These cards I did mount on coloured card. That’s partly so they were opaque and partly so they would last longer. Don’t use micro-dots to achieve the melding of card and printed character. It will make you miserable. Use Pritt-stick or double-sided tape. PVA glue can be a bit wet here so it can fuck up the character printout causing the colours to run.

I hope I’ve made the whole thing sound simple here. In practice I was drinking beer while doing it and I ended up printing things out many times, mis-measuring, experimenting and repairing as I went. By the end my room was awash with tiny Dota 2 character faces. It was like a creepy 2D cosplay convention, or maybe that room of faces in Game of Thrones.

At this point you just need to package it back up. If you haven’t lost your temper and aren’t desperate to leave the whole project behind you can really go to town, reimagining the box art, wrapping it up nicely, adding little customised bags for storage of the different bits and pieces… I carefully crossed out the word “Who” from Guess Who and inserted “Dota 2”. 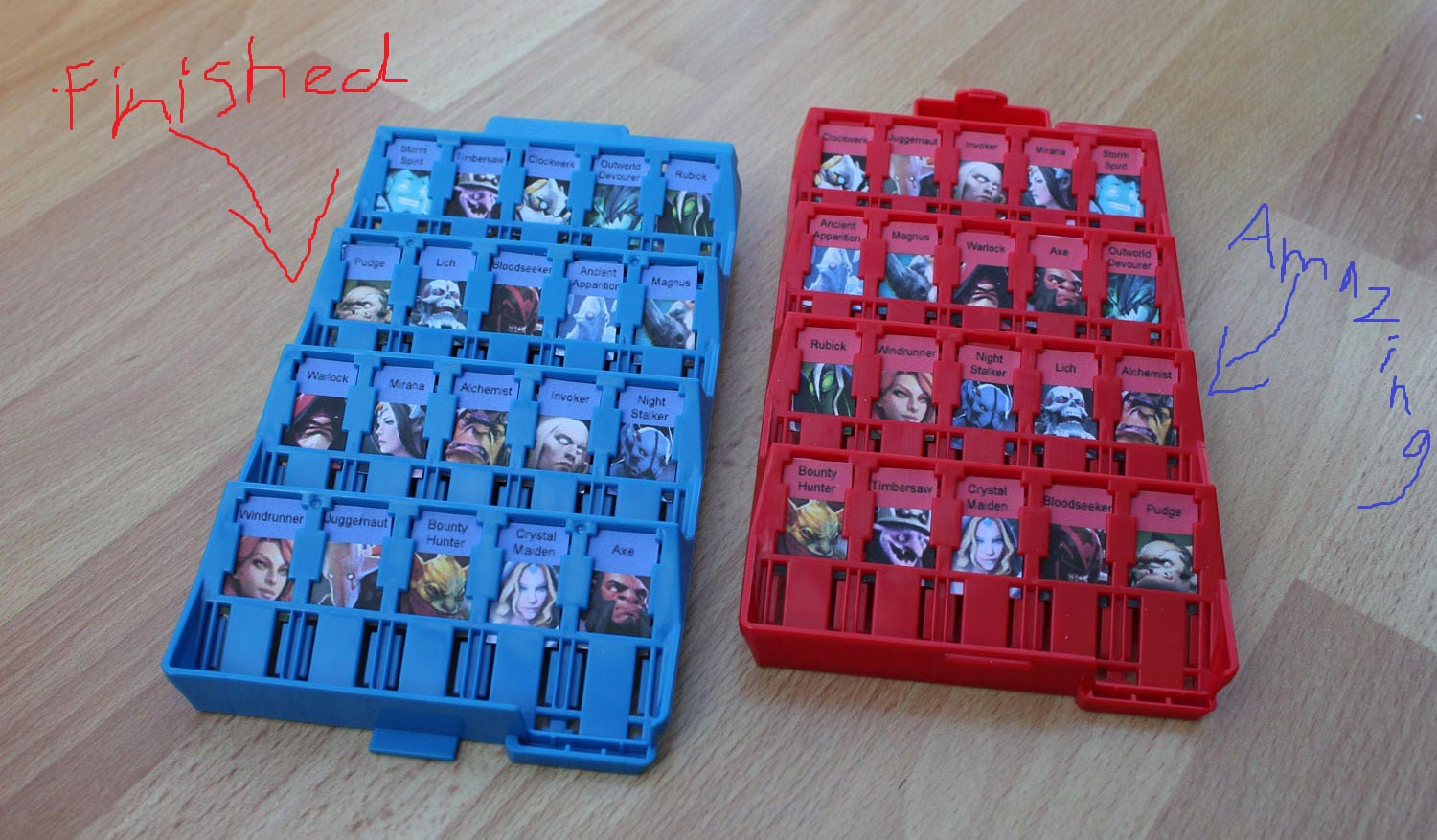 All that’s left to do is give it to the recipient/victim.

Will they like it? Well, it doesn’t really matter at this point. They said they would love whatever you got them and as far as I’m concerned that’s a legally binding contract. Any and all dissatisfaction on their part is entirely their own fault. You clearly spent time on a hugely personal gift so you are in the clear. For further expressions of love (or to amp up the spite) include a homemade glitter glue and macaroni greeting card. That will teach them. 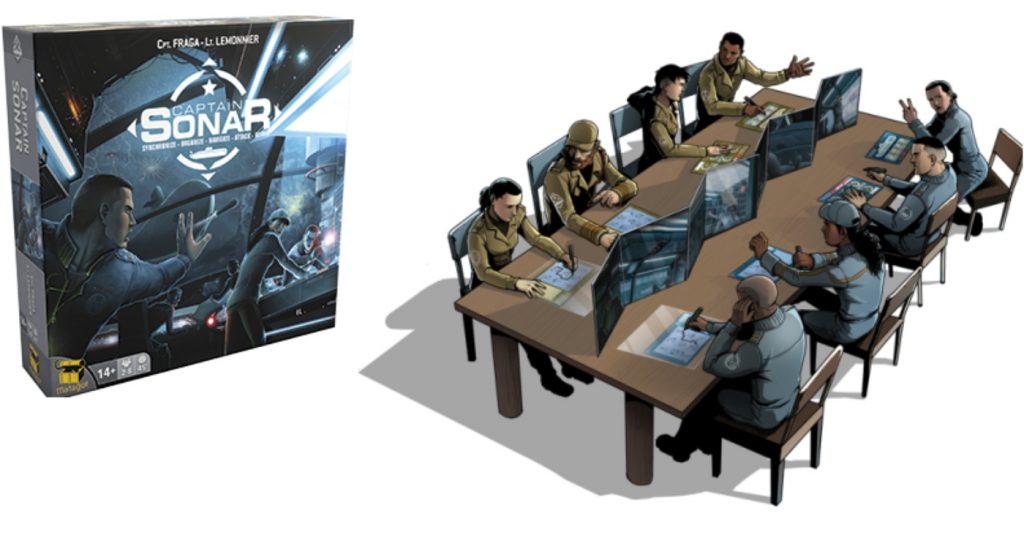 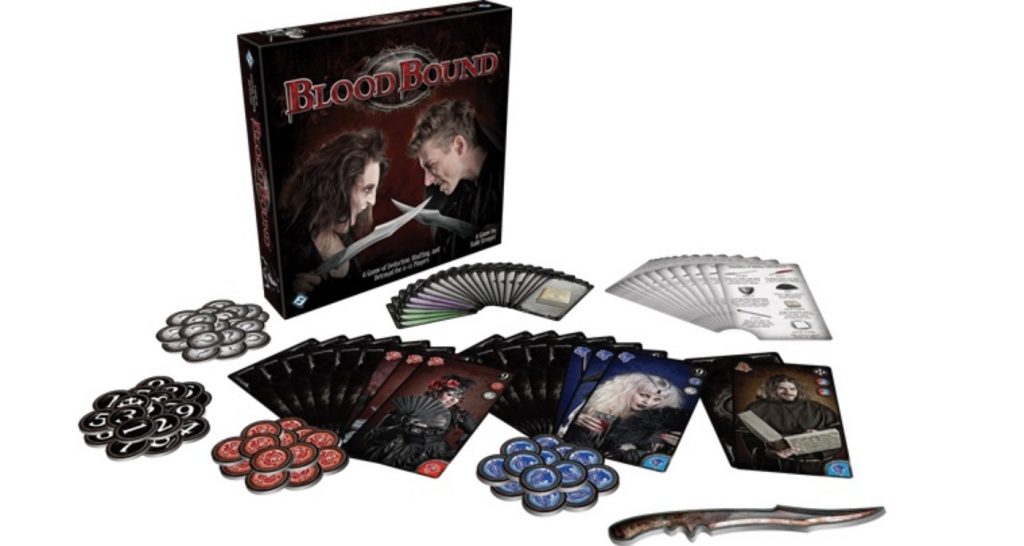