Pip: Okay, so you know how in comedies there’s that standard scene where someone walks past a storefront and out of shot, then walks backwards into shot, captivated by something in the window? That was pretty much exactly what happened in real life when I walked past the charity shop window display featuring Exploration.

Exploration is a board game with a box I prop up to display the cover, like it’s some kind of dramatic photo I want to casually lean on the mantlepiece. It’s not something I suggest playing when people come over but I just love seeing on my shelf. It brings me enjoyment through its art and aspirations rather than anything it achieves through play. It also shows this moment in board games from the past. There are so many of those moments – weird blips in terms of theme or odd shaped pieces or bizarre ideas that together make up the whole history of boardgames, with some becoming popular and others quietly retiring from print. I love catching sight of these moments. Exploration is this extinct thing. It’s a box that just demonstrates the moment someone went “what if we do dice rolling but ALSO somehow mountaineering AND diving AND there are ziggurats?” 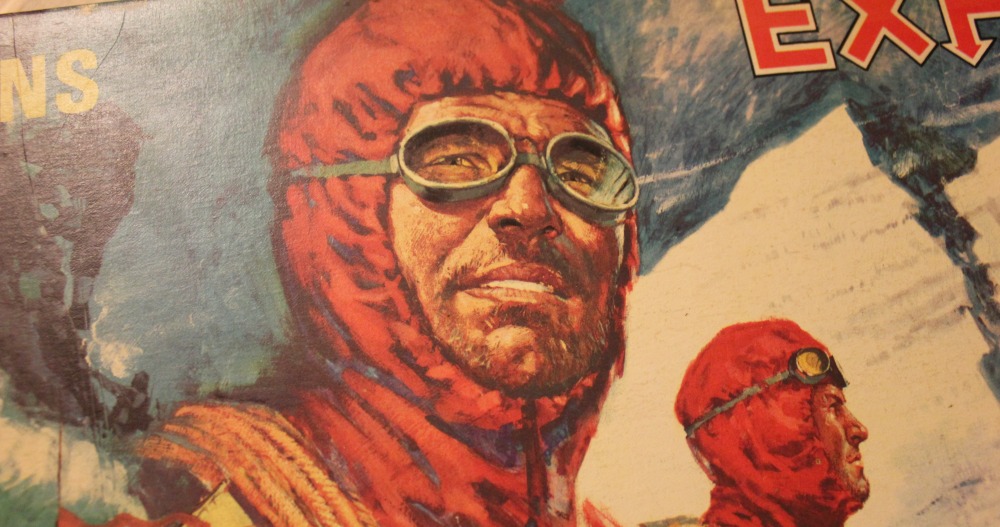 The box art is a big part of my attraction to Exploration. It’s a mish mash of exploration and adventure tropes. There are comprehensively anorak-ed men standing in front of snowy peaks, their chins set in a determined way. There’s a sort of wooden-rafty boat with a man in pants at the tiller sailing just ahead of a towering wave. A couple of ziggurats echo the arrangement of anorak-ed men but in a vaguely South American landscape of trees and also cacti because obviously. 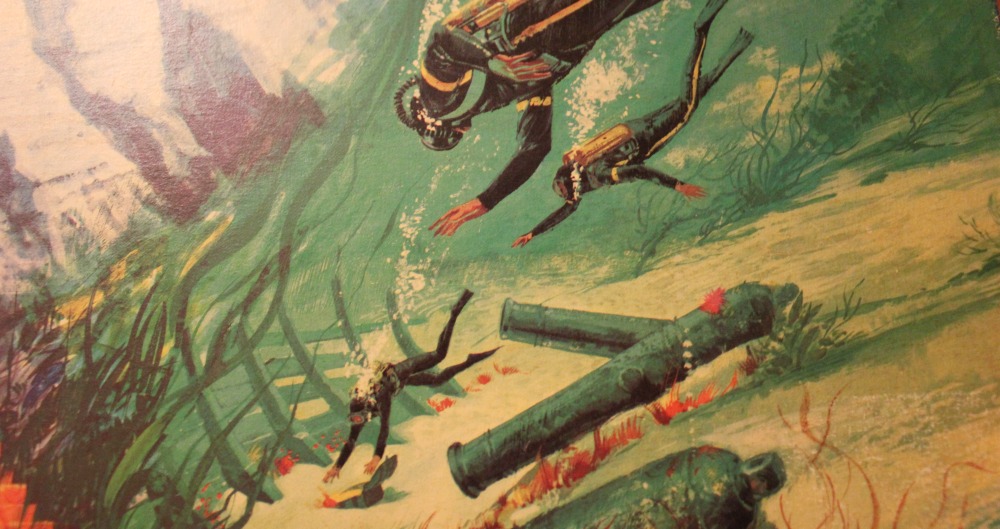 To the right are divers in sleek suits with go-faster yellow stripes. They’re scooping treasure from the sea bed, presumably salvaging it from the wreckage of some kind of galleon as a shark turns away in the background. I like to think that the shark is embarrassed by the divers’ obvious greed. “How gauche!” thinks the shark, echoing land-based reactions to people scrambling for sales items the day after Christmas.

It’s a very particular art style – very much an embodiment of the idea of manly men going exploring or a Boy’s Own adventure. There’s a lot that’s problematic in the world view it invokes – it’s very much a Western perspective and involves going to these far away places and just… taking things you find there or jamming a flag in it. It’s also a very male perspective. This game is not about ladies heading off into the wilds. It’s the sort of thing you’d say was “of its time” to allow for the context in which it was created but it’s reasonable to cringe at what that time produced. 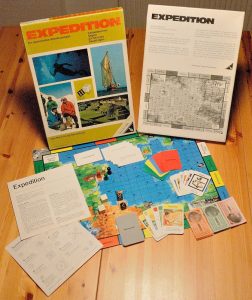 (Full components of the German version, via BoardGameGeek.)

The thing I do really love about it is that I have an affection for that slightly chilly attitude towards exploring. The sentiment is something along the lines of “Well, I’m going to go a long way and do something dangerous because the unknown is alluring and terrifying in a way that nothing else is and by visiting it I can somehow defeat it before it defeats me. Or maybe I will write a stoic final entry in the diary someone will discover at a later date.”

It’s kind of dreadful and bleak but… it’s the folly of people and the awful indifference of nature. There’s something of the terror of the sublime hidden in these kinds of images. That terror butts up against the complacence which laces the fiction of the box art. Those anorak-ed men are convinced they’ll summit those mountains and they have the optimism of people still near base camp. The divers are still experiencing the joy of finding the treasure rather than the practicalities of extraction or squabbles over ownership. The sailing craft is still surfing the wave, not wrecked in the crash of water. The ziggurats are… Well. Those are just there but you get the point. These are the moments of stupid confidence before anything (everything) goes wrong and before anyone has to tell anyone they’re going out and may be some time.

The Exploration box has a text section on the side that says:

RECAPTURE THE THRILLS OF MAN’S GREAT ACHIEVEMENTS. PREPARE AND MOUNT YOUR OWN EXPEDITION. 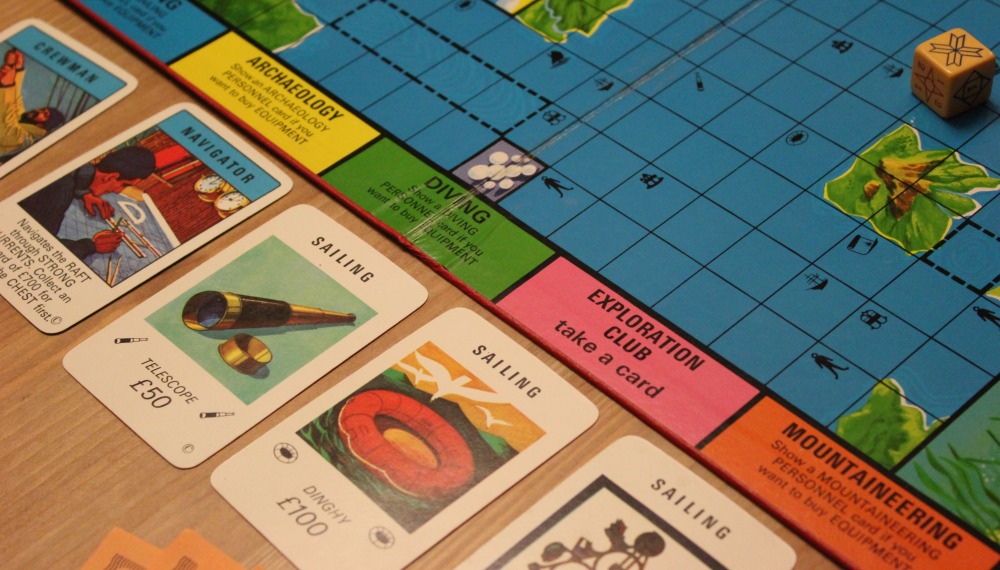 The game actually follows a two stage dice-based model where you circuit a Monopoly-esque outer track to purchase equipment and hire crew, then use a custom directional dice to wobble your way across a map divided into squares. You search for sunken galleons by dice-rolling your way across blue squares and conquer mountains by dice-rolling your way across greener squares. It’s not exactly matching the actions to the process it’s claiming to capture. You end up with this mundane but accessible experience whereby anyone can go on a magnificent adventure by rolling dice enough times. It’s alright; not awful but not inspired and the theme feels like set dressing for the most part.

But again, the artwork steps in and tugs at my interest. The personnel cards you collect while going round that Monopoly-style track are of that same default male Western perspective of the cover so, again, not unproblematic. But they’re also infused with that whole “PEOPLE GOING OUT AND DOING THINGS IN AN INCREDIBLY SIMPLISTIC WAY BECAUSE ADVENTURE” energy that I find endearing in its directness. There’s a Marine Engineer checking the time (it’s 12:20) and a Surveyor checking out what seems to be the skeleton of a massive dragon and a Navigator using a protractor for something. 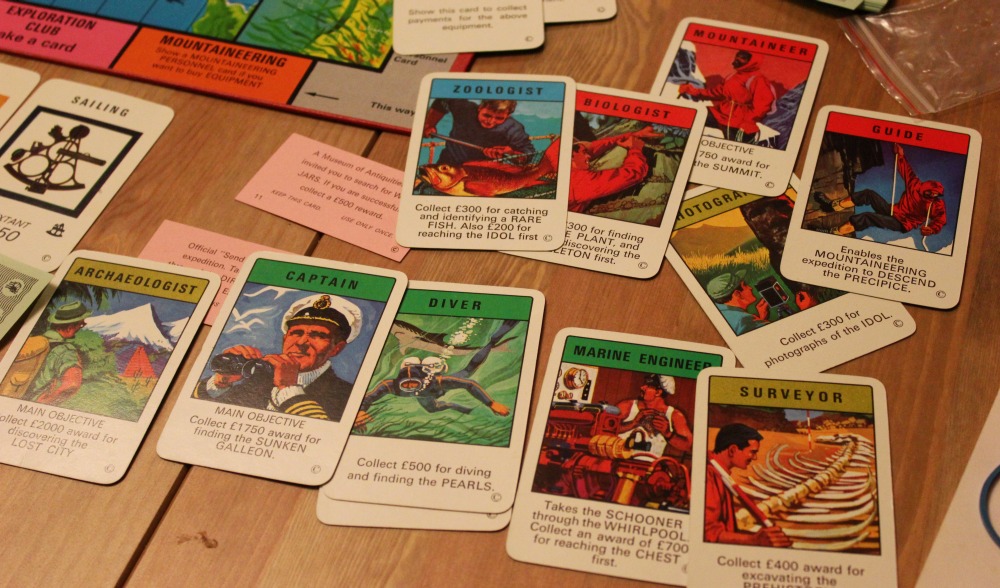 The equipment cards are more basic but involve hiring schooners or buying sextants. Schooners! Sextants! I have a little lego skeleton which holds a sextant and for some reason I find it incredibly exciting. Sextants are so far outside the remit of games journalism they’ve taken on this weird exotic allure. See also: power tools, combine harvesters and handwritten letters.

Expedition Club cards (sort of like community chest cards) tell you you’re throwing send-off parties (which manifests in the game as letting you throw the expedition dice twice when you switch to the second phase. There are membership arrears charges, delays in the form of skipping a turn so you can go to the hospital for tropical disease immunisation and wealthy patrons to bless you with cash. Those cards are steeped in the language of exploration – a vocabulary which has largely fallen out of our world.

It reminds me of an exhibition at the Queen’s Gallery called The Heart Of The Great Alone: Scott, Shackleton and Antarctic Photography. In that exhibition I found the loneliness and heartbreak of exploration as well as the initial exhilaration. Those words and phrases which Exploration uses to signify expeditions into the unknown remind me of that aching vast awfulness that beckons some people and not others. It scratches at the safe veneer with which Google Maps varnishes our everyday world. The enormous ocean, the unknown abyss, the deadly summits and the cloying jungle. We encroach on them in new ways now, but Exploration reminds me of their unknown depths as much as it reminds me of people trying to master them. 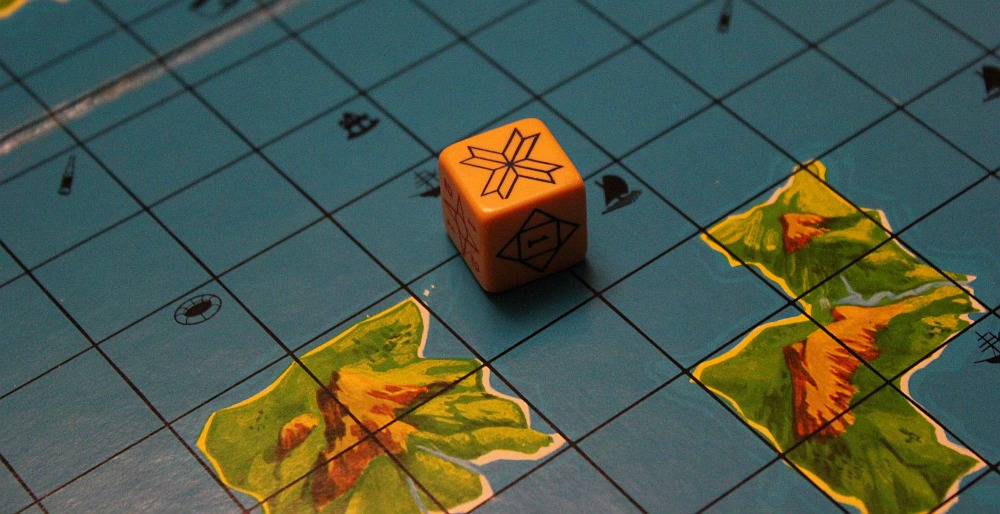 The last thing I wanted to mention is the Diradice. That’s the special little die with weird arrows and numbers all over the place which you switch to after the D6 of the first part of the game. I think it’s trying to capture the idea of non-direct movement in an expedition but it never quite manages it. You might also need some of the weirder rolls to get you round a section where you may not have the correct equipment for the terrain. My favourite is the side which has you move in an L shape, like the knight in chess. There’s just something delightfully awkward about things moving in an L shape. 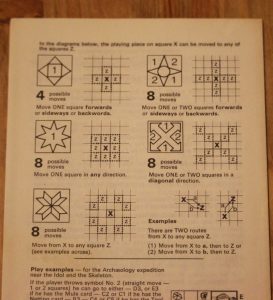 I was reminded of the awkwardness of the Diradice when playing Warhammer Quest: Silver Tower. In that we had a room with a crumbling narrow crossing and to get across it each player had to roll their dice and then stack them such that you could see one pip from to top side of each without the whole thing toppling over. It was such a delicate, tense process that really helped encapsulate the right elements of making the crossing using just dice. It’s such a stark contrast to what the Diradice manages in its hamfistedness

Oh, and if I lose said Diradice I can apparently send twelve and a half pence to Waddingtons for a replacement. I mean, that instruction in and of itself is so ridiculously of its time. It involves the postal service! It mentions a coin we don’t even have in circulation anymore! And it uses a price that just doesn’t even feel real, it’s so low! Twelve pence won’t even get you half a postage stamp now. 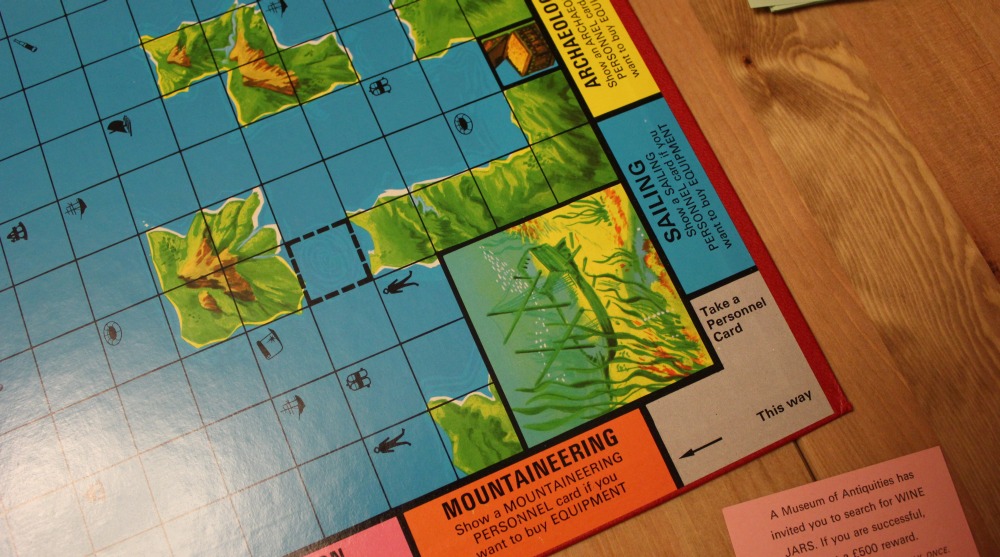 Exploration offers this tiny, manageable version of an expedition where you go to some shops, roll some dice and plod around the board. No-one dies. No-one gets dysentery. No-one returns as a husk of a person. To me there’s something of the folly of exploration embedded all the way through Exploration. It’s a game version of the moment at base camp where you believe you can actually summit the damn thing. That this will go to plan.

It’s also this hopeful moment in gaming – someone, somewhere made this thing and thought people would like it. In that small way it has the base camp optimism. I don’t know whether the people who created it ever thought it could summit the boardgame industry – maybe it was just supposed to summit a niche bit of living room entertainment at the very most. But it’s still this thing that was sent out into the world to uncertain success.  Seeing the games that didn’t manage longevity – which stayed frozen in their time through print runs which ceased – can be more attractive or romantic that the ones which became ubiquitous.

I’m now keeping an eye on the local charity shops for more of these board games which act as blobs of amber preserving a type of play.

But now it’s time for you to tell me about the blobs of amber in your own collections. Which games do you keep around as a window into another time?