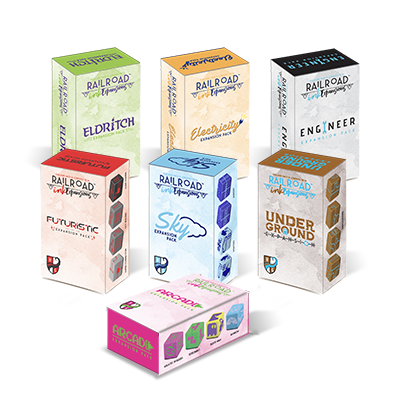 Arcade Expansion Pack
Use the special dice of the Arcade Expansion in addition to your regular Route dice and find new ways to score points! Feed Pluck-Man with enough Fruits to eat those pesky Ghost in the Pluck-Man Expansion! Respect your commitment for urban planning to gain precious points with the Tetromino Expansion! Send Aliens to attack your opponents while trying to defend against those invading you with the Galactic Invaders Expansion! Populate your board with colorful rainbows and send ominous clouds to your adversaries in the Rainbow Expansion!

Electricity Expansion Pack
Build Street Lamps and power them with Generators to light your board and score a lot of points with the Street Lamp Expansion, or connect your Exits to the central Accumulator and charge it with electricity with the Power Grid Expansion!

Futuristic Expansion Pack
Use “wild” routes to create huge networks with the Super-Connection Expansion! Gather resources and construct buildings to score extra points with the City Builder Expansion! Use UFOs to collect as many sheep as possible with the Alien Farmer Expansion!

Sky Expansion Pack
Control clouds, rain, and snow and prevent weather fronts from colliding to score bonus points with the Weather Expansion, or use air routes and airports to extend your networks to the sky with the Airline Expansion!