Paul: Attention please, passengers! Now arriving at platform two is this week’s Games News, stopping at High Fantasy, Kickstarter Reflections and Wargaming Central. A light buffet service of links will be available throughout the trip and free wifi is offered for your convenience.

Quinns: Paul I have trapped my coat in the carriage door.

Wait, Paul, stop the train! Kharnage is up ahead and I want to get off.

Kharnage was a 2016 Kickstarter that must have impressed super-publisher Asmodee because they’ll be bringing it to market next year. 2-4 players each control a different fantasy faction fighting for “a strategically worthless hill”, but this isn’t some heavy-footed war game. Rather, Kharnage sees players racing for initiative, developing their army and slamming it into their opponents for just 20 minutes before a winner is determined. O, what a lovely war!

In a month when everyone’s talking about Hero Realms, Kharnage is the small-box slug-fest to have turned my head. It’s pretty and different. What else is there to life?

Paul: Sorry for the inconvenience, sir, we were supposed to be at Durangrar 20 minutes ago. Please enjoy one complimentary use of the toilets. 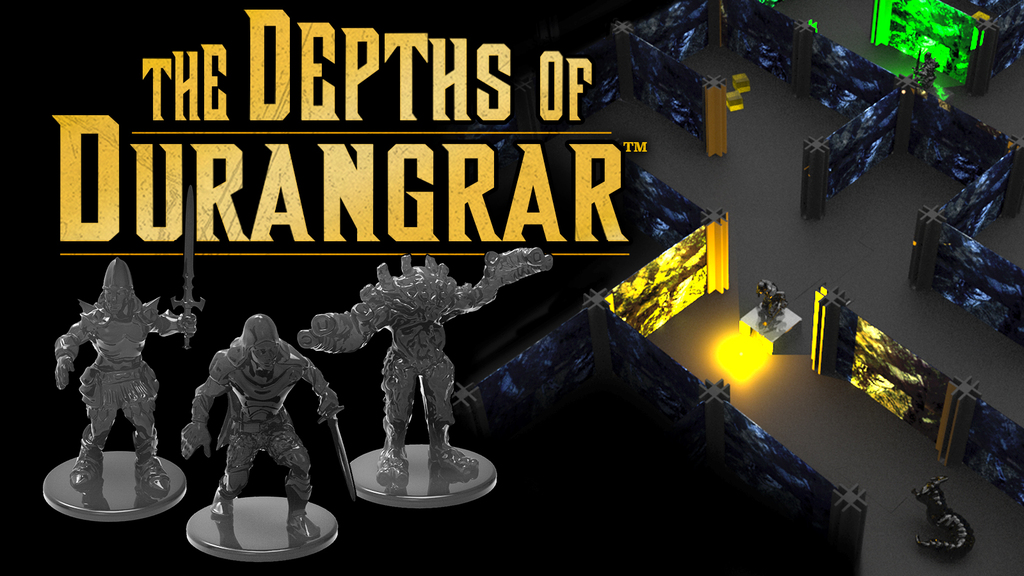 Quinns: Durangrar? Is that in Wales?

Paul: Maybe? The Depths of Durangrar is another 2017 release that we’ll be awaiting with relish, because it’s a dungeon crawler played in the DARK.

A team of hero players each control either the Scout, the Knight or the Demolitionist, each represented by a tiny miniature with a light-up base, and an antagonist player is given a few spooky monsters (including a “sentient fungus”) and a pair of night vision goggles. They alone can see the whole board.

But wait! It gets even better. Making use of the game’s randomised board are various player and monster abilities to build or destroy walls, and there’s even a fragile alliance mechanic where players can work together to defeat monsters, or flee with all of the gold.

Quinns: Are you serious

Quinns: Onwards, to Durangrar! Does this train go any faster?

Quinns: I think that dial just controls the air conditioning.

Paul: Oh. Then no, it doesn’t go any faster. 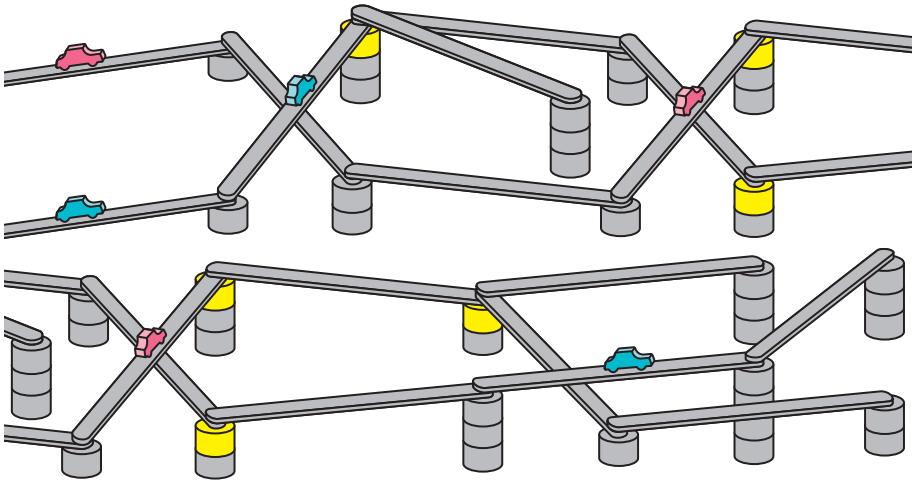 Quinns: Ooh, look out of the window! It’s a few Japanese board games coming in 2017.

Pyramid Deadline has the best name, but it’s Tokyo Highway (pictured above) that captured the imagination of the board game community this month.

This dexterity game is as simple as it looks. Players take turns placing cylinders and/or sticks to develop a mad interpretation of Tokyo’s highway network, and then, as in the phenomenal game of Go Cuckoo, you can try and place one of your coloured cars atop this increasingly-unstable monstrosity.

I can’t wait to try this in practice. Just like in Go Cuckoo, the theme’s going to make this incredibly funny. Imagine it! You build a highway, place a car and the inaugural motorist tips sideways and goes cartwheeling to his doom.

“Needs work!” you declare to your fellow engineers, who nod forgivingly. 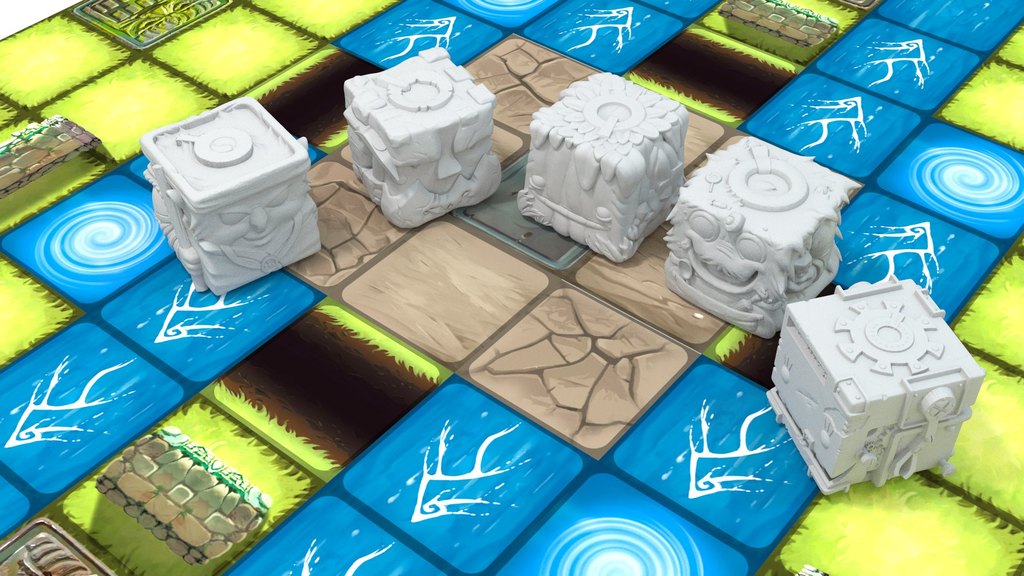 Paul: Ooh, look out of the window! It’s Quodd Heroes, the Kickstarter this week that we think is the least likely to be bad.

Players each control a cuboid character that has to roll, snatch and catapult itself around any number of modular boards, racing towards any number of objectives. Charming as it looks, early reports are calling Quodd Heroes a tough little puzzle, since the move you do depends on the upturned side of your character.

Quinns: With four characters, eighty cards and several ways to play this box sounds full of variety, but what fills us with the most hope is how funny the concept and the Kickstarter page both are. The thought of firing a rocket that not only rolls your friend off-course, but tips them onto their side, sounds like a right royal giggle.

Paul: Is that a phrase? Paul: Help yourself to any of the reading materials in the magazine rack, by the way.

This month the ever-excellent site How We Get To Next is all about “the power of play”, including a piece about the current state of professional wargaming, another on a world shortage of playgrounds and Leigh Alexander on the contradiction between the positive face of play and the commercial reality.

Quinns: It’s fun to note that in the wargaming article they describe how plenty of logistics specialists get involved in wargaming as a career, but that their simulations lack good modelling of psychology and sociology because of the people who choose it as a career. I never expected the U.S. army to join SU&SD in wanting people from more backgrounds making games.

Oh wow, look at this article someone left on their seat! The headline says it all: “How we turned $140k on Kickstarter into $40k in debt. And how we broke even.”

The article mostly addresses the most dangerous question involved in any board game Kickstarter, which is how many extra copies do you print? Too few and you throttle your game’s growth. Too many and you’ve torpedoed yourself. In fact– OH JESUS there’s something sticking the last pages of this article together!

Paul: Oh right, yeah. That passenger got off at the last stop. He must have had an emergency.

Quinns: Paul it has only ever been you and me on this train. Quinns: Oh my god you’re DISGUSTING, I’m getting off.

Quinns: THERE’S NO STOPPING ME, EITHER

Paul: …Oh my god, Quinns just jumped overboard! What a fool! Now he’s been vaporised and he has become part of the news.

This will be our final stop. Quinns has apparently appeared on self-help podcast Bootcamp Your Life, and it sounds like he had a great time too. Being depressed in the festive season is not fun at all, so the guys from Bootcamp Your Life are doing a big ol’ advent calendar of ways that you can take that better care of yourself, talking to a different expert every day! What good guys. 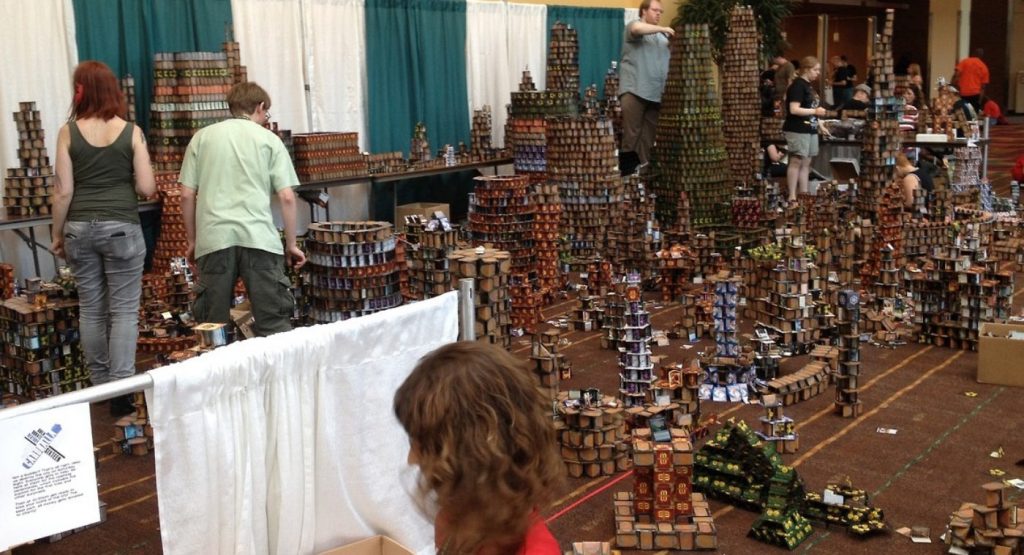 Paul’s Thank You for Gen Con