Tom: Are we really just going to make the intro about worms again? Is worm month just an excuse for lazy news introductions?

Ava: Not at all. It’s also a way to devalue the literally phenomenal amount of work going on behind the scenes to make an actual online convention happen, by pretending that we’re not putting out videos because we’re worms, rather than because Matt is now surrounded by so much tech that he’s starting to look like the robot lady from Metropolis.

Tom: Ah…. Worms.Ava: Okay, we’re going to kick off the news, and hog most of the news, with the sheer, burgeoning excitement that is it only being a few days until AwSHUX. It’s our very own convention! Blasted directly into your living room, bedroom, or wherever else you might stash your electronic devices.

Friday to Sunday, this weekend, 24 hours a day of hot, steamy boardgame previews, plays and chat will be filling the digital airwaves. To be fair, and for our own safety, we’re doing 8 hours live and looping it twice so that you can enjoy it whatever timezone you’re in. You’ll be able to chat and meet people in the convention discord or Twitch chat, and if you find people to play a game with we’ll be giving out free access to Tabletopia for the weekend (the coupon code ‘AWSHUX‘ will be valid from Wednesday to Wednesday). It’s all absolutely free, and you just need to go to awshux.show from Friday to Sunday to take part.

We’ve got so many exciting previews of games, including some being dropped a week ahead of their official launches at Essen Spiel’s online convention. Publishers are coming from everywhere from South Korea to Hungary to somewhere called ‘Canada’. Many of them will have digital booths for you to tour, with videos, live streams and chats for you to get hot and bothered about. We’ve not charged publishers for that, to help them through a difficult year. There’s even going to be an AwSHUX shop where you can buy stuff in a way that gives more direct support to the publishers, and to us! And that’s before we even mention the new merch that will be available online for the first time in years! There’s just so much!

Matt: I think it’s pretty neat and worth mentioning that all of the new merch has been hand-designed by myself and Tom, too! And OH GOSH I can’t stay for long as there’s so much that needs fixing up for this weekend, but I’m LEAPING into the news to share some brief bits of excitement…

We’ve got a killer selection of live shows over three days, with some fantastic guests: Tom Vasel(!), Mandi H, Paula Deming, Our Family Plays Games, Philippa Warr, Omari Akil, SungWon Cho (aka ProZD), and MORE MORE MORE! We’ll have a full schedule with details later in the week! I must return to my planet now, goodbye!

Ava: Not only all that: I’M going to be there. I’m pretty excited to be podcasting, late night chatting, and even playing some games on stream. I’m also disproportionately hyped to see the new Sidereal Confluence be shown off, which makes no sense when it’s a game I’ve already played.

Matt: It’s under my desk right now, Ava – and honestly it is LOVELY.

Check out twitter for more details of our own star-filled confluence. There’s an early schedule and a never ending stream of excitement. You can also take part in a survey to tell us exactly which of the games you’re most excited about – those games will then see more prominence within the digital convention-o-sphere.

Matt: Honestly, we do hope that people have a nice time poking around and playing a few games. As champions of the physicality and social proximity of our hobby, we know better than anyone that can’t simply take the magic of a great convention and “put it online” – but we’re putting together something we’re all proud of. Come along and have a look! It might be awful! Hopefully not??

Ava: Oh dear. Put your lifebelt on and follow me through this expository sentence and tell me how it makes you feel. 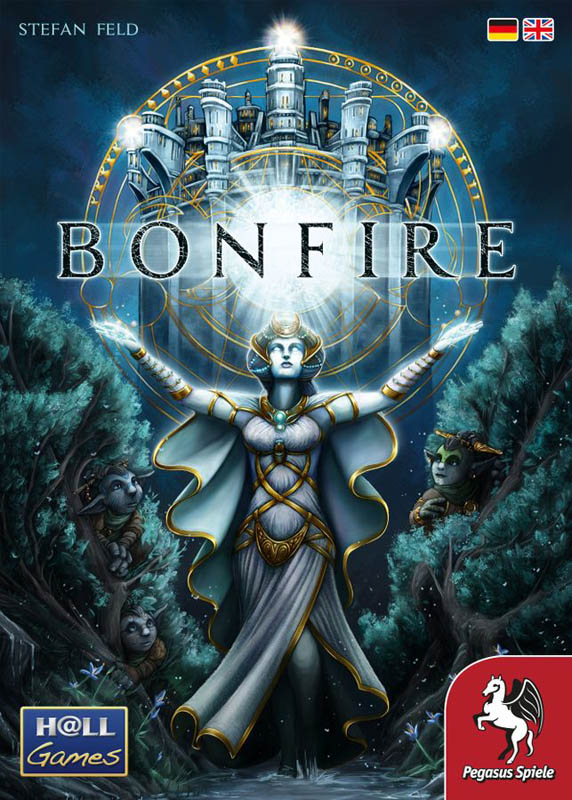 Ava: Bonfire is a game about building bonfires (of course), to lure back to the guardians of light (what), to defend the cities from darkness (I guess) and by the way everyone is gnomes (yes).

Of course, it doesn’t matter at all what the story is. it’s a Stefan Feld game, so the reality is it’s a game of collecting tiles so you can collect more tiles and move a little ship between tiles you’ll then flip.

Tom: I just watched a ‘How to Play’ video for this game at 2x speed and I have a headache BUT I understand the game a little more. Here’s what I can tell you; there are possibilities in this box the likes of which my mortal brain cannot comprehend. There’s tasks you’ve got to complete (simple) that you achieve by making a pattern of tiles on a grid (seems fine) and collecting resources (normal stuff) before slotting those tasks into bonfires (okay) which need to be staffed by guardians (no) but only if you’ve got the right portals (help) that have to be slotted into your board in reverse order (get me out of here). It looks like what those in the industry call ‘Fun’. 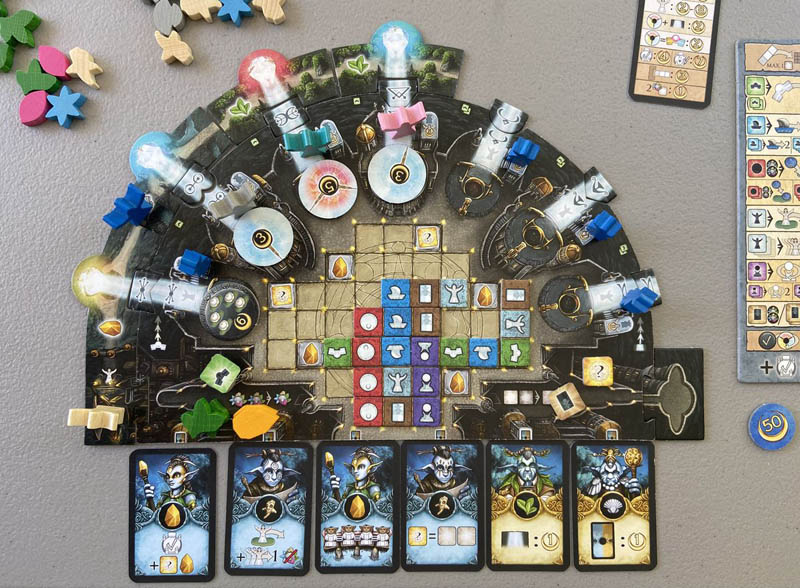 Ava: It’s easy to joke about this stuff, but honestly, it’s SO HARD to try to parse whether a european style resource shuffler is actually interesting at a distance. The precision chewiness of a mathematical puzzle like this is an arcane mystery, and even as literal professionals, it’s so hard to tell the dull from the superb. The devil is in the details, and the ways those details are obfuscated, clarified and explained by the narrative and illustrative systems. Don’t mistake our confusion for disdain, but also, don’t jump face first into something assuming the Feld name is a guarantee of thrills. We need to get hands on this before we can tell you if it’s bobbins or anti-bobbins.

Matt:Scientists still aren’t even totally sure the anti-bobbins particles exist.

Tom: If I know one thing, it’s that the art on this one is giving me all kinds of Terra Mystica in my bones – it’s got that thick, grungy, dingy, pulpy style of fantasy that I really appreciate and… Hang on… It’s literally the same artist? And that artist (Dennis Lohausen) has done the art for basically every single pulpy-fantasy eurogame that I’ve uttered ‘this is neat’ at? I need to have a lie down.

Ava: At least we know your bones have decent pattern recognition? 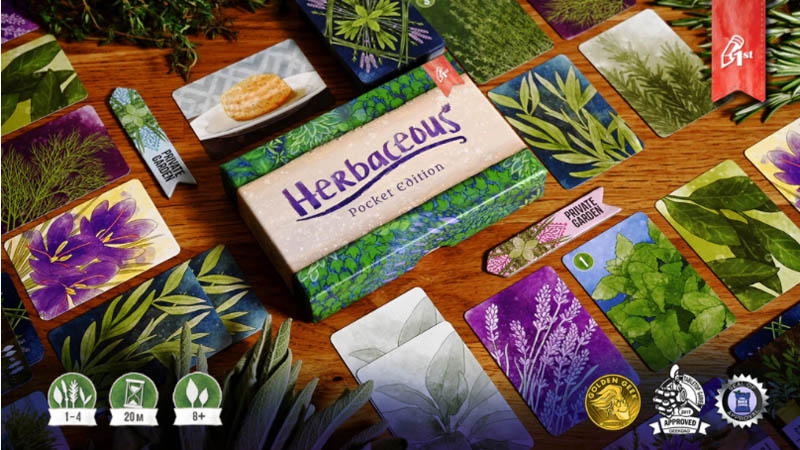 Ava: Hey! It’s a game I’ve played and really like, so I can actually give you an opinion for once!

Herbaceous Pocket Edition is a new tinier version of the already relatively compact card game Herbaceous. What’s my opinion? I think it might be too small!

Tom: What!? And you called Quinns ridiculous for getting annoyed he couldn’t hold cards in this game! And you’re saying the pocket edition is too small ?

Ava: YES. That said, the game here is a crackingly passive aggressive little herb collector. My headcanon has players sharing a community garden with an absurdly specific resident’s association dictating who can pick what, and when.

Each turn sees you filling up a shared community garden – as well as your own private stash – hoping to grab exactly the right herbs for your personal one-use pots. This makes for a simple game of pushing your luck and getting pipped to the post by people nabbing herbs you were waiting so eagerly for. 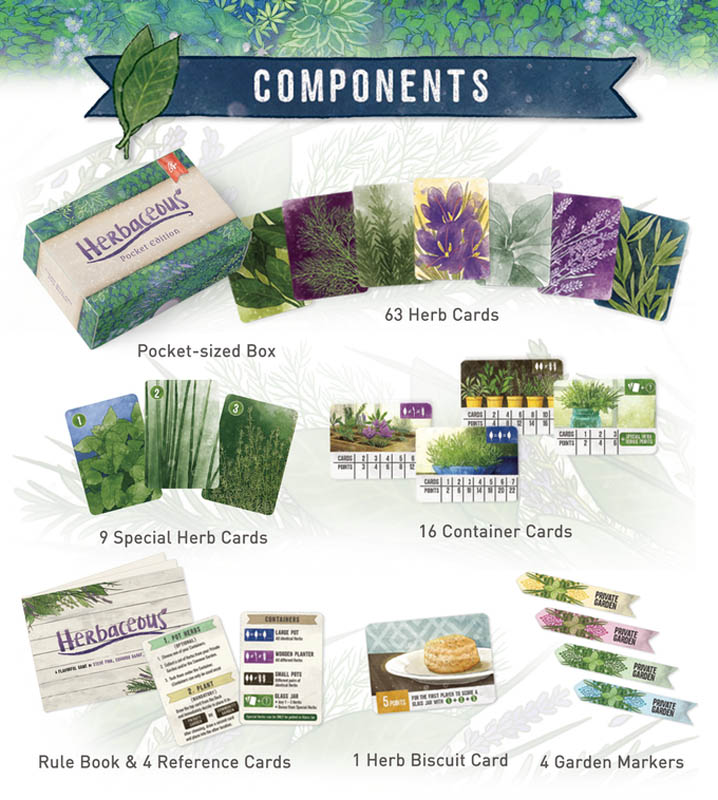 Tom: Ava I feel like the ‘how to play’ video from the designer’s mother in the Kickstarter is exactly the kind of wholesome content you need right now?

Ava: Aww, that’s lovely. It absolutely is the sort of game I could teach to someone’s proverbial mother. It’s simple and sharp and a little mean but also so quick you can just play it again: that way you only have to explain once that an American ‘herb biscuit’ is basically a scone. I’m also likely on the hook for this just because it adds some SPICES to the mix. I don’t know if it’s possible to grow star anise in a block of flats, but I am definitely excited to try.

Another kickstarter getting a second time around is Gil Hova’s High Rise.

After High Rise’s success, the Ultraplastic edition is offering a fancified version of the game with some ludicrously clever plastic skyscraper pieces. The game is essentially a giant rondel of actions, with some tricky decisions about what you’re going to pick up as you try to gather resources to build super towers, house some tenants, and potentially be corrupt and dodgy on the way. I’ve heard some pretty good things from people I respect, but haven’t had a chance to try it. 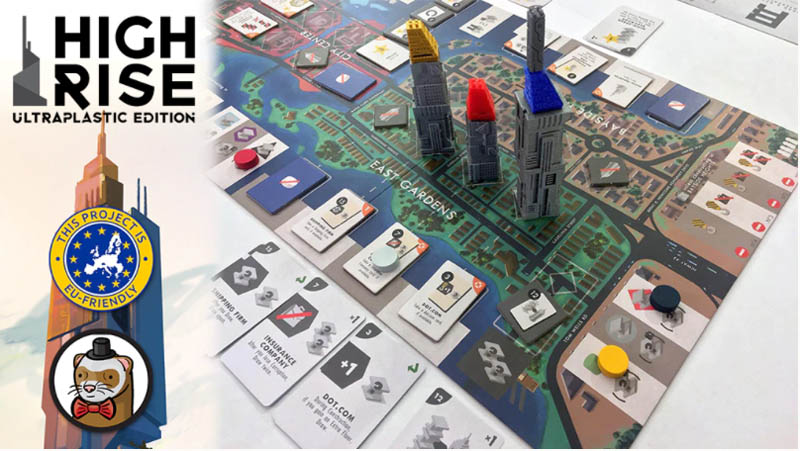 Tom: I’ve also heard lots of good things, and think I’ll be looking to bag a copy of this at some point in the near future… but I think I’ll go for the original, cardboardy version over the fancy new plastic stuff. It reminds me of when Matt and I played the ’even more plastic’ 20th anniversary mega version of Big City, which had some gorgeous and chunky resin miniatures but left us feeling like it was a game we’d only ever keep if it came in a form that were smaller and more cardboardy.

Ava: Eesh. And don’t get me started on my version of Container that weighs a tonne, despite being a game that is actually quite minimalist in terms of rules and structure?

It’s interesting though. Normally I’d be one hundred percent on your side, although my biggest sadness is reserved for when plastic replaces lovely satisfying wooden bits, like the newer Tigris and Euphrates. But in this case, I just adore the way those skyscrapers stack,and I always thought the cardboard skyscrapers looked weirdly sad? That said, I’m also worried those tall plastic things will fall over as you reach around them to move along the rondel, turning the whole city into an unappealing dexterity game.

Buying things is hard! Materials are complicated! Plastic is killing the oceans! I don’t like decisions!

Tom: Okay, it looks like Ava’s going to collapse, I’m going to put her to bed so she can get some rest before the weekend. We’ll see you at AwSHUX. 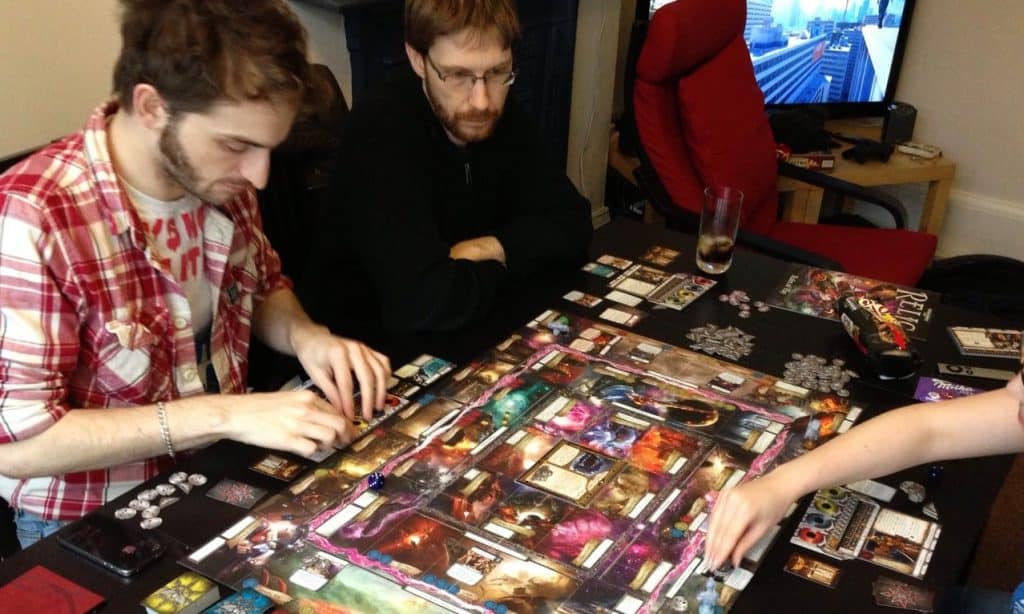 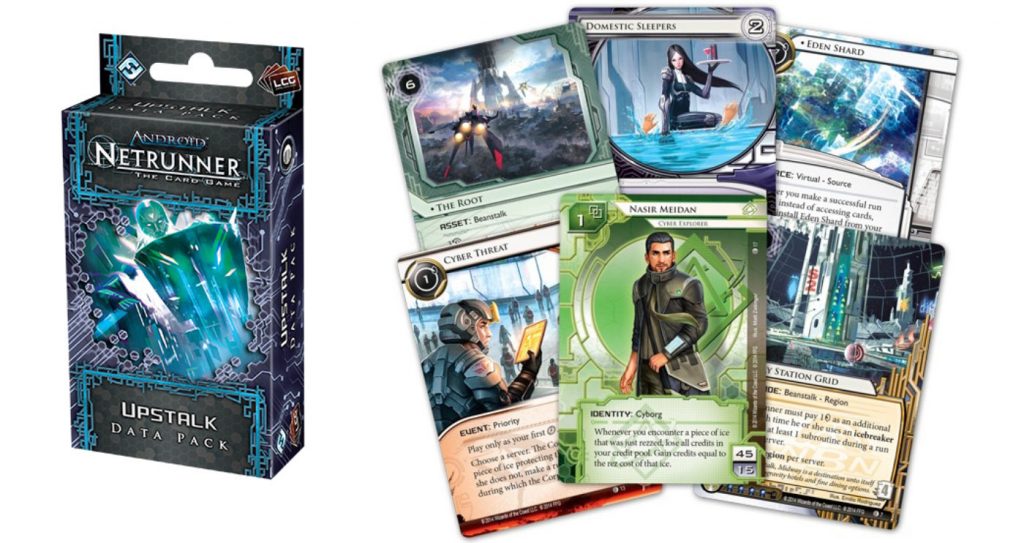