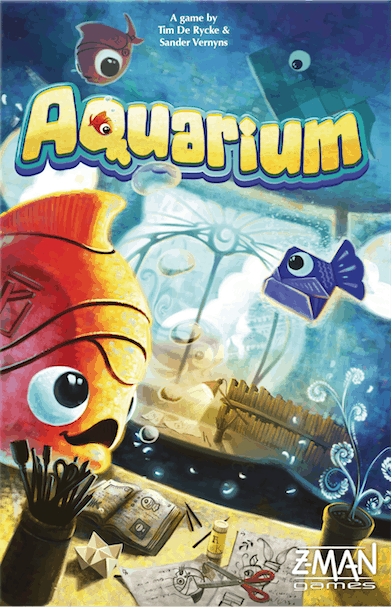 Aquarium offers high player interaction as the other players can – and will – use their action cards to alter the available fish that you can buy and the price that you have to pay for them.

Each player starts with a set of nine action cards and $15. The deck is shuffled, then set up with three or four “Feeding time!” cards shuffled into the deck at various points. On a turn, a player first turns up a card from the deck if the market is empty (as it is as the start of the game). Then the player looks at the fish and plant cards in the market and decides whether to pass or try to buy them. If he passes, he takes $2 from the bank and adds the top card to the market; if he wants to buy, all other players get to influence what’s on the market and what the cards cost.

Once the goods and the cost are set, the active player chooses to buy all the fish and plants on offer or none of them. The cost is equal to the sum of the card values, plus or minus any modifications, then doubled or halved as appropriate. All purchased cards go into a player’s personal aquarium. If a player has two identical fish, he can move them to a separate breeding tank where they will earn him 1-3 coins each turn.

Each time a “Feeding time!” card is revealed, players reveal one “food cost” card at random, then pay money equal to that cost times the number of stars on fish and plants in their aquariums. Any fish not fed starve and float away to the big toilet bowl in the sky. Each plant in an aquarium reduces the food cost by one.

After the final “Feeding time!”, players count the stars on their non-breeding fish, then receive bonuses for collecting all colored fish of the same size, all three sizes of fish of the same color and different varieties of plants. The player with the most stars wins.