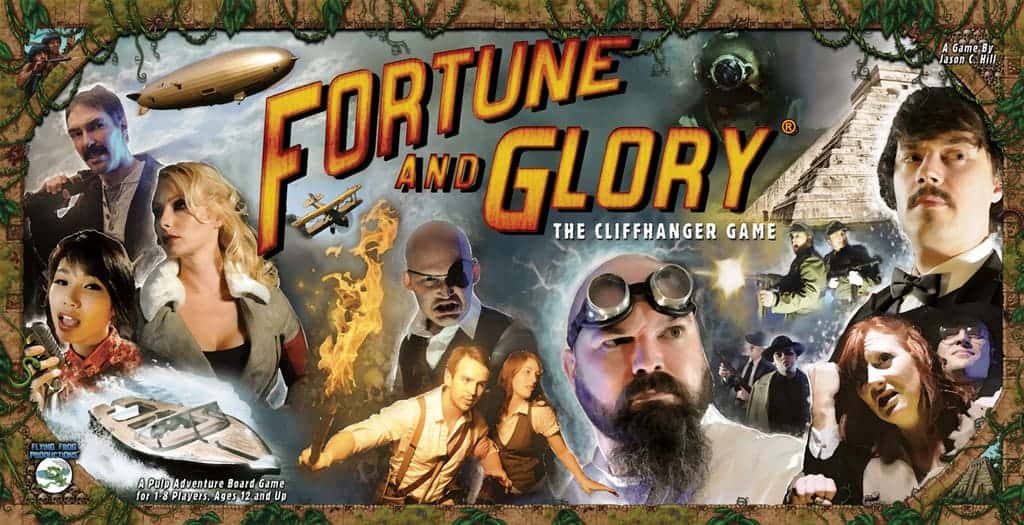 It is the late 1930s, and the world is in turmoil. Humanity is on the brink of war as imperialist nations in the Far East and Europe work aggressively to expand their domination. The Nazis have taken control of Germany and now spread darkness across the globe in their hunt for powerful occult artifacts that can give them the upper hand in the days to come. But the spirit of adventure and freedom won’t be stamped out so easily.

Heroic adventurers from around the world answer the call, racing against time to hunt down ancient artifacts, explore deadly temples, and fight back the powers of darkness from engulfing the world in flames. It is a race of good versus evil, and only a cunning and agile explorer can claim the ultimate prize of… Fortune and Glory!

Fortune and Glory: The Cliffhanger Game is a fast-paced game of high adventure, vile villains, edge-of-your-seat danger, and cliffhanger pulp movie action. Players take on the role of a treasure hunter, traveling the globe in search of ancient artifacts and fending off danger and villains at every turn in a quest for the ultimate reward of fortune and glory!

Featuring a beautifully rendered adventure map of the world as the game board, eight pulp adventure heroes to choose from (such as Jake Zane the Flying Ace, Li Mei Chen the Night Club Singer and Martial Artist, or Dr. Zhukov Master of Science), an army of ruthless villains and thugs (including the Chicago Mob and the dreaded occult-hunting Nazis), ancient Mayan temples to explore with a zeppelin hovering overhead, a wealth of coins to horde as heroes collect fortune and glory throughout the game, and a unique mechanism of dangers to overcome and the classic cliffhanger moments of suspense that can result. Fortune and Glory is designed to create a pulp serial cinematic feel as the story and game unfold.

So strap on your adventure boots and goggles, fire up the engines on the seaplane, and grab some extra ammo for your revolver…the Nazis already have a head start and in this race for fortune and glory, and there’s no prize for second place!