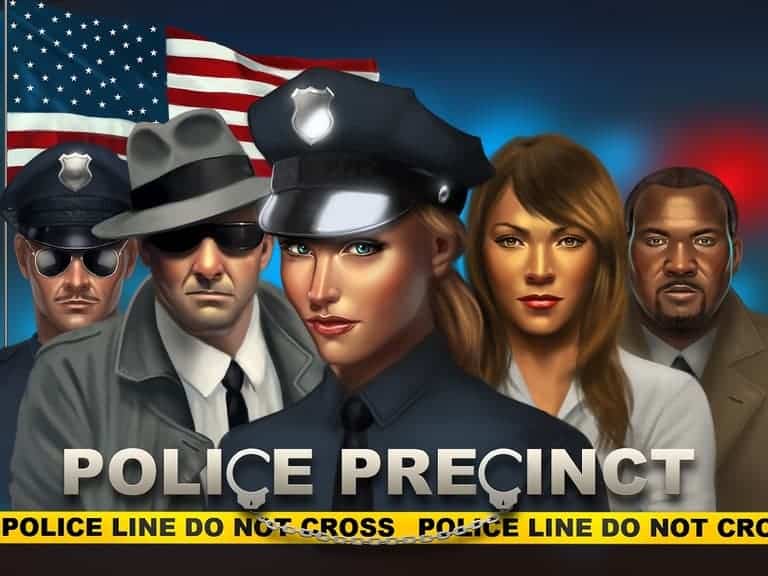 Police Precinct is a cooperative/semi-cooperative game where players are tasked with solving a mysterious murder while simultaneously working to keep crime on the streets under control, and to keep the city from falling into chaos.

Players take on the role of police officers with different areas of expertise. The players work together to solve the mystery by collecting evidence and eventually arresting the suspect.

Complicating matters is the fact that there may or may not be a corrupt officer that is being paid off by the murderer to suppress evidence, the same evidence everyone else is trying to uncover.

Players move around the city searching through randomly shuffled investigation cards for evidence in relation to the murder. The number of investigation cards drawn depends on the character’s rating as well as how many player cards are added by other players to boost the character’s rating for the current “search”. There are four decks of investigation cards (Interview Witness, Collect Crime Scene Evidence, Examine Body and Locate Murder Weapon) to be searched. These decks are shuffled and placed in different locations. So, a player might search the cards in one area and not find any evidence at all… or maybe the bribed cop, if there is one, did the searching and just said no evidence was found.

Players have to find all of the evidence cards from the investigation decks to be able to arrest the murderer.

At the end of each player’s turn they draw an event card. These cards represent growing crime and emergencies that are happening in the city. Each one piles on top of the other, and if the cops don’t stay on top of things, they will be buried in crime! These Event cards are placed on the game board at the locations where they occur. Some of them have “unknown circumstance” tokens placed face-down upon them, adding even more tension.

If too many criminals are located in one area, a gang is formed. Each gang has it’s own power and can cripple the police efforts if not handled quickly and carefully.

So, not only are the players investigating the murder, but they must also arrest street criminals and handle emergencies.

Sometimes when a character successfully completes a task, that character is rewarded with a doughnut token. These tokens can later be used to help with tasks. However, if the character does not complete the task in time, the city crime track advances. The track can also advance if street crimes grow so large that no more street criminals can be placed, when called for. If the Crime Track advances to the end, the murderer escapes justice and the good cops fail the game.

To add to the tension even further, The good cops only have so many days to complete the investigation. If time runs out, once again the murderer shall escape justice!

The pressure is great and the stakes are high!